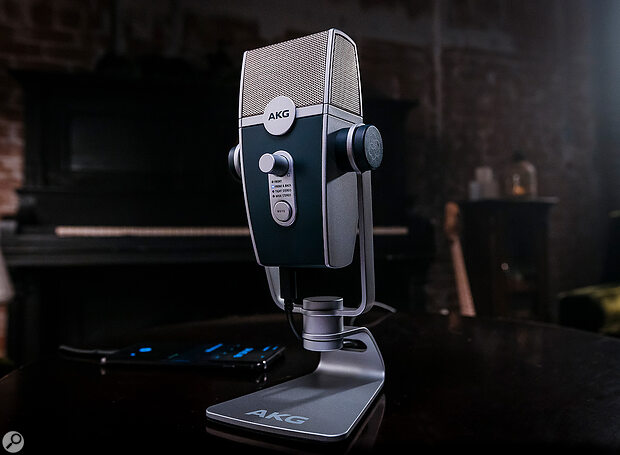 USB microphones are nothing new but there's a lot more to the AKG Lyra than its gloriously vintage look, which tips a nod towards both vintage broadcast mics and AKG's own C414. While clearly of appeal to podcasters and videocasters, the microphone also has applications in home or mobile music recording.

The Lyra sits atop a custom all-metal desk stand, and the swivel section can be separated by using a coin to unscrew the threaded thumbscrew that secures it to the base of the stand. The mic and swivel section may then be mounted on a standard mic stand, and an EU thread adaptor is included. Built into the case is a shockmount for the capsules and a sound diffusor to help reduce plosive pops. Power comes from the USB port into which the mic is plugged; a suitable USB cable is also included. For those who haven't yet decided on which DAW to go with, a copy of Ableton's Live 10 Lite is included.

Perhaps the most noticeable departure from convention is that the Lyra actually incorporates four back-electret capsules, two angled slightly away from each other and forward facing, plus two rear-facing capsules angled the same way. AKG call this their Adaptive Capsule Array. A four-way rotary switch then selects between four pickup patterns depending on the application. Position one is for a single user sitting in front of the mic and yields a cardioid polar pattern, while position two accommodates a pair of performers, one behind the mic and one in front. This appears to be an omni pattern. Position three picks up from the front of the mic in a tight stereo pattern, while position four picks up both front and rear in a wide stereo pattern for occasions when more ambience is needed.

The mic delivers a clean, relatively uncoloured vocal sound but it also proved itself perfectly capable when recording acoustic guitar and a wooden flute.

A headphone amplifier with zero-latency source monitoring is built into the microphone, the headphone connection point being a 3.5mm stereo jack at the base of the unit next to the USB connector. Don't forget to mute the source audio monitoring in your DAW though, or you'll hear both the latency-free signal and the slightly delayed one that has done the round trip to and from your DAW. There's a rotary headphone level control on the front of the mic, along with a mute button that kills the mic without cutting off the DAW playback. Four LEDs show which mic pattern is selected. On the rear panel, alongside the pattern selection knob, there's a control for microphone gain. 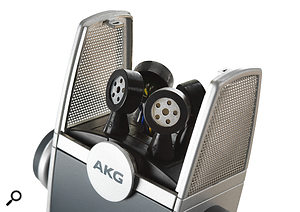 Internally, the Lyra houses four capsules to achieve its range of polar patterns.Offering plug-and-play simplicity, the class-compliant Lyra operates with 24-bit conversion and can run at sample rates of up to 192kHz. No drivers are needed for Mac OS or Windows operation, and for iOS use an Apple Camera Connection Kit USB adaptor will do the trick. AKG specify the frequency range of the mic as 20Hz to 20kHz, though this isn't as informative as a proper frequency response (-3dB points) figure. The maximum SPL is 129dB, so as long as you don't use it for close-miking kick drums or trumpets, you probably won't run out of headroom. I couldn't find a noise specification but ,in its intended use, noise was never an issue.

In use, I found the desk stand to be very solid, and weighty enough at 900g to keep the mic in place. It also has a rubbery non-slip base to further prevent it sliding around. The mic delivers a clean, relatively uncoloured vocal sound but it also proved itself perfectly capable when recording acoustic guitar and a wooden flute. The various patterns are very useful, and although the first option (cardioid) is the most obvious choice for podcasting or recording vocals, those stereo and double-sided options provide practical alternatives when it comes to recording music, dual voiceovers or capturing a stereo source. Note though that the headphone volume control adjusts both the DAW playback and the mic's direct monitoring level, so if the balance isn't to your liking, you'll need to adjust your DAW's output level. Some other USB mics provide a DAW/Source balance control, which does make life a little easier.

This is a very flexible, solid microphone that goes well beyond the usual remit as a simple podcaster's USB mic. The fact that it looks great doesn't hurt either.

The Lyra sounds clean and quiet, looks fantastic and adds some useful functionality to the usual USB mic format.