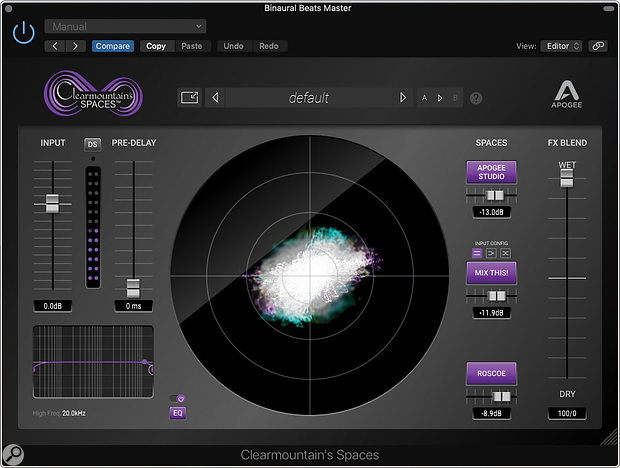 For most of us, mix engineer Bob Clearmountain needs no introduction; he's worked with everybody from David Bowie to the Rolling Stones. His first collaboration with audio interface manufacturers Apogee resulted in a set of plug‑ins called Clearmountain's Domain [reviewed SOS March 2020 issue], which emulated his go-to signal chain. Clearmountain's Spaces was originally part of that chain but it's now available separately.

Based on impulse responses, it incorporates profiles of some of Clearmountain's favourite rooms and echo chambers, along with some of the processing used on many of his hit records. AU, AAX and VST plug‑in formats are supported (Mac OS 10.12.6/Windows 10 and higher) and protection is via an iLok account, though no physical iLok dongle is required.

It is beautifully simple to use. There are three 'spaces', each with its own slider and on/off button for balancing its contribution to the overall reverb character — the idea is that the plug‑in is used to create a Composite Space that changes character as you adjust the mix of the three elements. There's also a three-band EQ, as well as global pre-delay adjustment and a switchable de-esser. The centre of the GUI is dominated by a goniometer-type display that shows stereo activity.

The EQ, which affects the signal before the reverb, is adjusted by dragging points on a curve, while the de-esser (the DS button, also pre-reverb) is either on or off. De-essing a reverb feed is a common way to stop sibilants making the reverb sound splashy, so it's a welcome inclusion.

If you're after that Tamla Motown 'all recorded in the same room' vibe, this plug‑in will be your new best friend.

The first space, called Apogee Studio, is a shortish and fairly warm-sounding room ambience recorded in Apogee's in-house recording studio. Next up is Mix This, a medium-length, brighter reverb recorded in the echo chambers of Clearmountain's own Los Angeles studio. Input configuration buttons, for use when the plug‑in is used in a stereo insert slot, allow this space to be configured for true stereo, stereo-to-mono and stereo crossfeed routing, the last of those reversing the left and right outputs. The longest space, Roscoe, is a rich-sounding reverb recorded in a Los Angeles studio belonging to one of Bob's friends.

Despite the apparent simplicity and surprisingly affordable price of this plug‑in, it's actually quite versatile, and it sounds great; I found it effective on vocals and instruments as well as on drum submixes. Of course, you get the usual wet/dry control to balance the composite space's overall contribution too, so rather than being 'just another room reverb' for livening up individual parts or submixes, these spaces can also be applied (in moderation) to a complete mix, to add realism and complexity without obscuring the source material; if you're after that Tamla Motown 'all recorded in the same room' vibe, this plug‑in will be your new best friend. I also tried adding it to one of my more ambient mixes, and it both glued the elements together and added an analogue-like smoothness.

Bob Clearmountain has always appreciated the unique nature of real spaces, and the great thing about this plug‑in is that it allows you to combine the best aspects of three different and musically excellent spaces that are in three geographical locations. The EQ section can make a huge difference to the reverberant sound, as the various presets ably demonstrate, many using setups that Bob used on specific records. For example, one of the included preset examples is the treatment for Keef's guitar on the Stones' 'Start Me Up'. In short, if you're looking for some fairy dust to simply make things sound better, this might be just what you need.