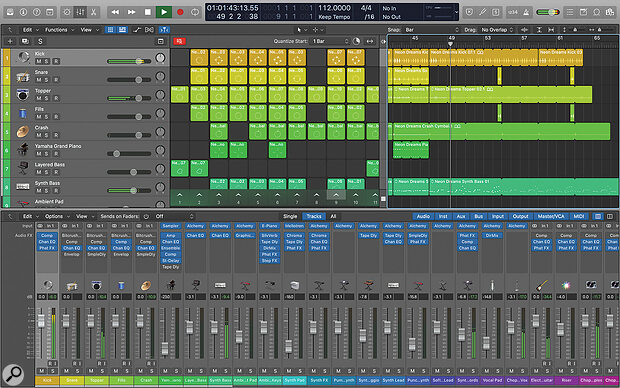 The Project window can now display two different views, either together or individually. There's the traditional Tracks Area (on the top-right), where regions of musical data are represented by rectangles based on their musical length, and the new Live Loops grid (shown above, middle), where individual musical ideas that generally work well as loops are stored as cells within that grid.

I always get a slight frisson when Apple release a major new version of Logic Pro X. Part of this can be attributed to nostalgia, but mostly it's because Apple never pre-announce such a release: it just shows up on the App Store, accompanied by a press release and an updated web page. This time, however, a major new release wasn't quite so unexpected, thanks to a screenshot that had briefly appeared on Apple's web site at the end of March. The screenshot in question showed a version of Logic featuring what looked like two GarageBand-inspired features — Live Loops and Remix FX — portending what could be expected in a forthcoming upgrade.

Despite the toothpaste being out of the tube, Apple remained silent until May 12th when I found myself downloading the newly released Logic Pro 10.5 from the App Store. As with previous upgrades since the launch of Logic Pro X in 2013, it was once again free for existing users, and newcomers will be charged the very reasonable price of £199.99$199.99 for the entire package. You just need a relatively good Mac running at least Mac OS Mojave 10.14.6, with 6GB of free storage for a minimal installation; with Logic Pro 10.5 boasting 2,500 new loops, 70 extra kits, and over 1,500 additional patches, the full set of content requires an installation with 72GB of storage space.

It's worth noting that when Apple recently extended the free trial period of Final Cut Pro X (the company's video editing application) from 30 to 90 days, they also introduced a free trial of Logic Pro X for the first time. This can be downloaded from the company's web site (as opposed to the App Store) and currently expires after the same generous period.

Apple recommend that existing users should back up both their project files as well as the currently installed version of Logic Pro X before updating, and this is exceptionally good advice. Whilst backing up work is always prudent, it won't be possible to download previous releases of the application from the Mac App Store once you've updated to 10.5. You can archive the existing version by right-clicking the application's icon and selecting Compress from the contextual menu, storing the resulting .ZIP file (which you might want to rename) in a safe place in case you need to revert to this earlier version, or move it to another Mac.

As anticipated, the headline new feature in Logic Pro 10.5 is indeed Live Loops, first seen in GarageBand 2.1 on iOS back in January 2016. However, as you might expect, Logic Pro X proffers a more sophisticated implementation, aiming to combine a second, nonlinear approach to music creation within a single, Logic-based workflow. Traditionally, Logic has used a linear method of timeline-based sequencing, while the new, nonlinear approach invites an unavoidable comparison to Ableton's Live, enabling you to work from a collection of ideas in a more free-form manner without worrying about a timeline.

To make this possible, the Project window can now display two different views, either together or individually. There's the traditional Tracks Area we all know and love, where regions of musical data are represented by rectangles based on their musical length, and the new Live Loops grid (shown above), where individual musical ideas that generally work well as loops are stored as cells within that grid. A vertical line of cells in the grid is referred to as a scene, and each horizontal row plays a cell back via the corresponding track in the track list (or 'Track Header area' in Logic parlance). This is particularly neat, since it makes it straightforward to share ideas between the two areas, as we shall see.

Getting started with Live Loops is easy, thanks to some new options in the Project Chooser window. By selecting New Project in the list on the left, you can either create an Empty Project as before, or you can start a new Live Loops Project, where the Live Loops Grid is shown instead.

Conceptually, cells are to the Live Loops grid what regions are to the Tracks Area, and in the same way you can have different types of regions — such as audio, MIDI and Drummer — the Live Loops grid also has the equivalent cell types. Empty cells are displayed as blank, dark grey rectangles, while a cell containing musical data is represented by a colourful square. A cell looks a bit like a region, in that its name is shown at the top above a visual overview of the content, this time in the form of a circular graphic representing the Loop Length of a cell.

A Play/Stop button appears when you hover the pointer over a cell, which can be clicked to start a cell playing. During playback, an animated pie slice represents the playback location, and you can stop a cell by once again clicking its Play/Stop button. Alternatively, you can also stop a cell by clicking the Play/Stop button in an empty cell on the same row, or by clicking that row's Stop button located on the far right of the Live Loops grid. Note that although you can play back cells on different rows simultaneously, only one cell per row can be playing at any given time. Starting a cell on the same row as another cell that's playing will switch playback to the newly started cell, ceasing playback of the previous cell.

To start all cells within a scene, click the trigger button for that scene depicted by a 'hat' symbol at the bottom of the Live Loops Grid. To stop the playback of a scene (or any combination of cells), you can click the Grid Stop button at the bottom right of the grid.

As you start and stop cells playing, you'll probably notice that a cell doesn't necessarily start or stop playback immediately when you click its Play/Stop button. This is because Logic waits for the cell's next Quantise Start time before carrying out the action, enabling cells to be started and stopped in time with other cells that might be playing. If a cell has a Quantise Start time of '1 Bar', for example, it will always start or stop playing on the next bar position.

Starting and stopping cells during playback as just described is known as queuing, although 'cueing' might seem more appropriate. If you want to queue a cell for playback, simple right-click a cell and choose Cue Cell Playback from the context menu. You'll notice how a cell that's queued for playback blinks to indicate it will start playing when you engage Logic's normal playback, such as by pressing Space. If you stop the playback by using Logic's transport (pressing Space again, for example), playback stops immediately, as opposed to waiting for the next Quantise Start position, but the queued cell remains queued. You can dequeue a cell by right-clicking it and selecting Dequeue Cell from the context menu, or clicking the Grid Stop button.

Queuing a single cell for playback probably isn't that useful, so it's possible to select multiple cells simultaneously and add all of them to the queue. To do this, select a cell by clicking its name at the top part of a cell, and then, holding down Shift, select other cells in the same manner. Using the Cue Cell Playback command from the context menu will queue the selected cells, or you can use the handy Option-Return key command. Selected cells can be removed from the queue by choosing Dequeue Selected Cells from the context menu or by pressing Option-Return again, as well as using the Grid Stop button, or by using Logic's Stop command multiple times by pressing Enter.

As you might expect, you can queue and dequeue a scene rather than individual cells by right-clicking a scene's trigger button and choosing Queue and Dequeue Scene from the context menu. And, again, you can dequeue a scene using the Grid Stop or standard Stop commands.

Following typical Logic conventions, cell parameters for a selected cell can be adjusted in the Cell Inspector, and you'll find region-like settings you'll already be familiar with for muting, transposing and quantising. These take their place alongside settings for configuring playback, the loop, length and speed of a cell, as well as neat reverse option that plays a cell...