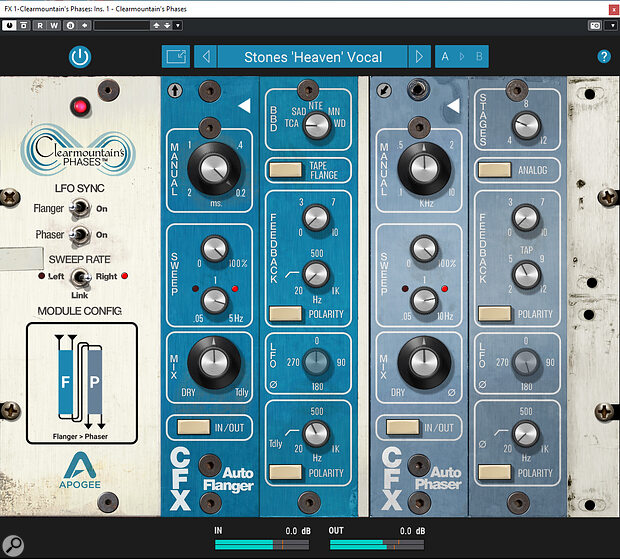 It can’t turn you into Bob Clearmountain, but this plug‑in can certainly help you create some beautiful effects!

In the ’80s and early ’90s, as my musical tastes were being forged, you couldn’t avoid records mixed by Bob Clearmountain. Not that I wanted to! Some not only remain favourite tracks, but reliable mix references too, and they hold plenty of lessons for aspiring mix engineers. One thing that really sets his mixes apart from the crowd is his use of effects, and in recent years Apogee have been working with him to develop a range of effects plug‑ins. We’ve already seen Clearmountain’s Domain (an interesting multi‑effects plug‑in) and Clearmountain’s Spaces (an IR‑based reverb), and these are now joined by Clearmountains’s Phases. All support AAX, AU and VST and Mac/Windows hosts, and are authorised using iLok (cloud, computer or iLok 2 or 3 dongle).

Clearmountains’s Phases is based largely on models of Clearmountain’s vintage MXR Auto Phaser and Auto Flanger hardware units, but there are some important additions including the option to select different BBD chips (with different delay times) and a tape‑flanging effect. Clearmountain has reportedly created many of the presets and these include settings from some of his most famous productions (notably the vocals on the Rolling Stones’ ‘Heaven’ and Bowie’s ‘China Girl’), as well as other signature sounds (eg. Led Zep’s ‘Kashmir’ drums and a Hendrix guitar patch) and more generally useful starting points that demonstrate the plug‑in’s wider potential.

The photo‑realistic GUI is resizeable up to a maximum 150%, which made the plug‑in stray beyond the constraints of my 1920x1080 screen, so it should play nicely with high‑DPI monitors. The key controls of the Auto Flanger (always on the left) and Auto Phaser (right) are on a main panel, while a second optional Extended panel allows you to dive deeper. On the left of the rack a pop‑out menu offers routing options: you can choose only the flanger, only the phaser, the two in series in either order, or both in parallel. In the last configuration, the input and output meters at the bottom are joined by a Mix Trim control for each effect.

There are several different ways to configure the signal routing.

It all looks great — it practically begs you to come and play! I know some readers tend to prefer more utilitarian interfaces but, for the most part, I found this one very intuitive, and if in doubt you can switch on impressively detailed ‘tooltip’ descriptions (think paragraphs rather than one‑liners); I did read it but never actually needed to consult the manual. It’s not a case of form over function, then, but I did find myself wishing for a more obvious indication of buttons’ on‑off status. True to the hardware, these have no indicator lights, and their position is indicated only by the presence or lack of a drop shadow; virtual LEDs or a backlit buttons would, for me at least, constitute a significant improvement.

The single‑panel view for both the flanger and the phaser provides access to Manual, Sweep, Mix and In/Out controls, the only real difference being the values available around the controls. There’s also a variable aliasing control — Apogee’s developer tells me their instinct was to remove all traces of aliasing but that they liked the result less, so ended up making it a user controllable artifact!

The Sweep controls determine how the effects are modulated by the internal LFO, and the values can be set in terms of time or musical divisions (the host tempo sync switches are on the left of the rack). Set the Sweep percent to zero, and the effect no longer reacts to the LFO but to the position of the Manual knob. This could be mapped to a MIDI controller or MIDI LFO plug‑in, or controlled using your DAW’s parameter automation for more precise design of your whooshes and swooshes.

Pop open the second panel and for the flanger you can choose one of five different BBD chip emulations, each with a different delay time. Beneath this, a button toggles tape‑flanging mode on/off. Apogee tell me that that tape flanging was a challenging feature to implement, since it was a request from Bob Clearmountain which arrived when they’d already designed the MXR emulations and it necessitated a change to the way the plug‑in handled latency (modulating the varispeed control of two tape machines means a ‘delay’ can actually be earlier in time than the signal arriving at the plug‑in’s input). It’s a welcome inclusion, and an effect that pedals and most plug‑ins don’t offer. The corresponding controls for the phaser set the number of stages (4 to 12, with more stages creating more notches), and engage an Analog mode, which simulates aging of components for a slightly more coloured (darker) sound.

The remaining the controls are identical on both effects. You can increase the level of signal sent into the feedback loop, and high‑pass filter (20Hz to 1kHz) and/or invert its polarity. Next comes a phase rotator for the LFO. This makes the LFO cycle start at a different point for the left and right channels, to create a greater sense of width and stereo interest. (Naturally, the option is greyed out when the Sweep Rate is set globally to follow the Left or Right, but available when in Link mode). Finally, there’s a variable high‑pass filter and polarity invert switch for the wet signal path.

As much fun as big whoosy swooshes, watery warbles, and siren‑like flanging can be, though, this plug‑in can also perform much less obvious but very useful mixing jobs. It’s great for creating wide, spacious, organic‑sounding textures and movement... 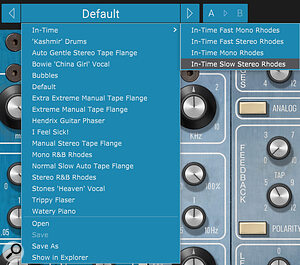 The presets are well judged, and include some settings for well‑known artists and tracks.

Download and installation to my main Intel Core i9 9900K‑based Windows 10 system was quick and pain‑free. That’s a couple of years old now but still a pretty powerful machine, and I lost count of the instances I could get running. So, for a decent modelling plug‑in, it seems to be pretty efficient in terms of computer resources. I’ve already described the controls in functional terms so I’ll focus here mainly on what you can do with them.

I started my tests by auditioning some of the presets with a range of material: vocals, drums, electric and acoustic guitars, and some Rhodes and Hammond parts. All seem nicely judged, and the recognisable track and artist references seemed on point. But I’d suggest you don’t let the names confine your choices: the stereo Rhodes preset, for example, sounded lovely on both Hammond and acoustic guitar, adding a lovely sense of width and spaciousness.

While many of the presets put a smile on my face, though, a great‑sounding plug‑in like this draws me in and encourages me to experiment. I never ceased to be amazed at the range of effects I could achieve by combining just a single flanger and phaser. For instance, when processing a strummed acoustic guitar loop at one point I could have sworn I could hear a Hammond ‘beating’ through a Leslie in the background!

As much fun as big whoosy swooshes, watery warbles, and siren‑like flanging can be, though, this plug‑in can also perform much less obvious but very useful mixing jobs. It’s great for creating wide, spacious, organic‑sounding textures and movement, and so good for injecting interest in boring static pads or long reverb and delay tails. That delay‑compensated tape‑flanging setting is oh‑so useful too; you’ll know it instantly when you hear it.

While the DAW sync was valuable, I loved working a bit more freeform, whether setting the timings manually (often I find I can get away with less assertive effects settings, or lower‑level effects than when strictly sync’ed, since they tend to grab the ear) or automating those manual controls for long, drawn‑out flanger swooshes.

So where does that leave us? Put simply, Clearmountain’s Phases is a really useful, beautiful‑sounding plug‑in. I have various other phaser and flanger plug‑ins and few make the same sort of effects seem so effortless. It can sound warm or dark, smooth or a touch crunchy in a way most others can’t, at least not without combining them with various other processors. I know already that this plug‑in will mean I end up routing signals out to my pedals rather less for future mixes.

Sadly, of course, Clearmountain’s Phases cannot give me Bob’s ears and ideas. But it is certainly now my favourite phaser/flanger plug‑in and I’d definitely recommend checking out the demo.

Clearmountain’s Phases does a great job of modelling the famous producer’s MXR rack effects and more besides. It sounds great and is easy to use.