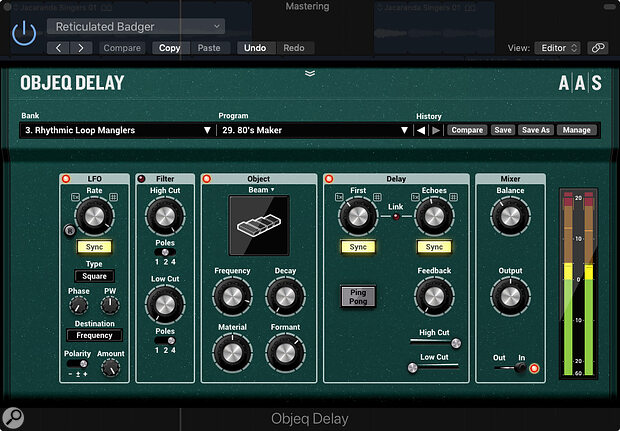 Objeq Delay, which supports all the popular plug‑in formats for Mac and Windows, including AAX, is not a typical delay plug‑in. Yes, it can generate the usual repeats with adjustable feedback and tempo sync, but the way it treats those repeats, using some ingenious acoustic filtering, really sets it apart.

The input signal is processed using one of four modelled acoustic resonators: a drum head, a vibrating string, a plate, or a bar. A Material control changes the type of material that’s being modelled and, in general, this produces a more metallic sound when turned towards its fully clockwise position. Decay determines how quickly those resonances die away. There’s also a conventional high/low filter module, prior to the resonators, with each filter switchable between one, two or four poles. Once processed, the signal feeds a stereo delay. Add some LFO modulation that can be routed into the filter, object, delay or wet/dry mix parameters, and you’re in for a lot of fun.

The delay section’s separate left and right channels are each based around two delay lines. The first line adds a straightforward delay to the input signal, its length set using the First knob. This feeds both the Mix stage and delay two, which runs inside a feedback loop for creating repeat echoes. A Link button allows both to be adjusted together or independently. The second delay time is adjusted using the Echoes knob, and there’s a sync‑to‑tempo option, with a choice of subdivisions. Another pair of high‑ and low‑cut sliders process only the second delay, and these come before the Feedback control. A Ping Pong switch produces the familiar left‑to‑right delay effect.

There’s a generous selection of presets to get you started but pretty much instant gratification can also be had if you just dive in and set up your own effects; the GUI is resizable and intuitive. The effects vary from almost ‘normal’ delays to the audio equivalent of oscillator sync, hints of ring modulation, dramatic timbre smearing, rhythmic delays and added musical notes. The delay time can also be set very short so you can recreate chorus and flanger type effects when modulating with the LFO, which has a choice of waveforms, polarity and wave‑shaping options.

Objeq Delay is going straight into my ‘favourites’ plug‑in folder!

Another drop‑down menu selects the LFO destination, though you can’t send the LFO to multiple destinations simultaneously. Send a square‑wave LFO to the output and you have instant chopping. Route the random LFO to the drum head model and you can get what sounds like a small drum playing along with your own drum loops or, if you set the frequency lower and change the model to String with square‑wave modulation, you can add a two‑note bass line. It’s easy to reshape a drum loop beyond recognition simply by experimenting with the Object section and, if you also automate the various parameters, evolving sounds are easy to create.

If you’re into lo‑fi music or ambient compositions, this will almost certainly be a case of love at first sound, and Objeq Delay is going straight into my ‘favourites’ plug‑in folder!