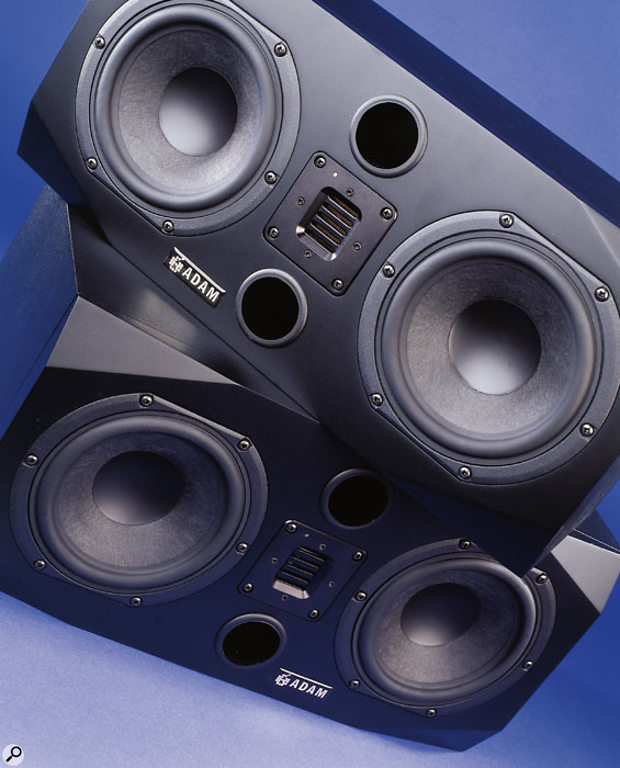 This pair of active monitors provides much of the performance of the company's high-end S3As, but at a more affordable price point.

German company ADAM are fast gaining a strong reputation in the studio monitor market, where their unique selling point is the company's folded-ribbon ART tweeter. Most medium-sized studio monitors use dome tweeters with either fabric or metal diaphragms, driven by means of a voice coil, but ADAM have updated the ribbon tweeter concept to provide smooth high-end reproduction at realistic studio monitoring levels. Conventional ribbon tweeters use flat ribbons, which can sound good, but have a limited audio output. ADAM's concertina-shaped ribbon provides a much greater surface area, which is what enables higher SPLs to be reproduced.

The P33A under review here looks very similar to the ADAM S3A we reviewed back in SOS March 2004. Like the S3A, it is actually a three-way design, even though it seems to comprise two identical bass/mid-range drivers and a tweeter. Only one of the two cone drivers covers the full bass/mid-range, while the other has a lower crossover point (150Hz) so it reinforces only low frequencies, which is where most power is required. This eliminates the phase problems that can occur when the mid-range is produced by two drivers at the same time, while still providing plenty of low-end drive capability.

Based around two 182mm (7.5 inches) cone drivers and ADAM's own ART tweeter, the P33A utilises three 100W amplifiers, one per driver, and the driver geometry is arranged to allow either horizontal or vertical mounting, though horizontal is recommended in this case. Each of the cone drivers has a 33mm voice coil powering a Nomex cone, and the high crossover point is set at 1.8kHz.

The two speakers look symmetrical, but because of the difference in the signals fed to the drivers, they are built as mirror-image pairs and labelled 'A' and 'B'. The 'A' speaker has the woofer on the left side, so you can decide which way around sounds best in your installation and keep track of which speaker is which. Provided that you mount them the correct side up, you can use either 'A' or 'B' as the right-hand speaker, so my guess would be that 'woofers pointing in' works best when the speakers are fairly close together and 'woofers pointing out' when they are widely spaced, as more stereo information comes from the mid-range speakers than from the woofers. It seems that the design philosophy was to get as close to the S3A performance as possible, but at a lower UK price point. However, at this price they're still not cheap monitors by any stretch! 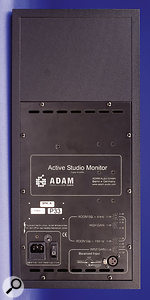 Above the audio-input XLR are a selection of controls for shaping the frequency response of the P33A to match your specific room. High- and low-shelving EQ bands are provided, at 6kHz and 150Hz respectively, and both bands offer a ±6dB gain range. In addition to these is a ±4dB gain control for the tweeter level.Photo: Mike Cameron

The cabinet, which features two front ports, has a distinctive shape with faceted corners. It measures 500 x 230 x 280mm, with a weight of 16kg, and is made from high-density board. A green LED set into the tweeter surround indicates that the speakers are powered up. An overall frequency response of 34Hz-35kHz ±3dB is quoted, which is exceptional for a speaker of this size. EQ-tweaking controls are provided on the rear panel along with variable input gain — there's ±4dB of adjustment over tweeter level, a high-shelving room EQ at 6kHz, and a low-shelving room EQ at 150Hz. Both room EQ controls have a ±6dB range. The input connector is a balanced XLR and the mains comes in via an IEC socket with adjacent power switch. A 112dB maximum SPL is quoted, which at nearfield distances is actually pretty loud.

In my own studio, with the EQ switches all flat, the P33As sounded well controlled and punchy, as well as conveying lots of detail. The high end managed to convey transparency without shrillness, and the stereo imaging was good. From the outset you know that you are hearing serious monitors designed to let you know what you've recorded with a high degree of accuracy and transparency. At the low end, the bass is even and well extended without being over-hyped. Although I haven't heard the S3As in my studio for some time, I think it fair to say that they have a similar overall character. You might feel that given the same ART tweeter as the S3As and identically-sized bass/mid-range drivers, they should sound similar, but that's not something that can be taken for granted with ADAM, as almost all of their models have a somewhat different general character to each other even though they all use the same tweeter. However, the S3A was my favourite and the P33As come very close indeed.

The EQ tailoring controls are recessed and require a screwdriver for adjustment, so it's unlikely they'll be nudged by accident. I tried them out to see what effect they had and found them to be very effective — they get the job done, but don't wreck the tonal balance, though in my own room the flat setting worked best for me.

For those users looking for really good monitors, but who can't afford the higher-priced ADAM models, the P33As are very attractive. There are lots of good monitors in this price range, but a lot comes down to personal preference and I happen to like having a detailed monitor that lets me hear into the mix, but that doesn't have to create an aggressive high end to achieve that. The bottom line is that the P33As allow you to create mixes that translate well to other sound systems. I accept that this is still a lot of money to spend on monitors, and the more casual project-studio owners may not be able to justify the cost, but if you're using your studio to make a commercial return from your own or clients' material, then it would be worth taking a closer look and auditioning a pair for yourself.

The ADAM P33As come very close to delivering the quality of the S3As, but at just over half the UK price.