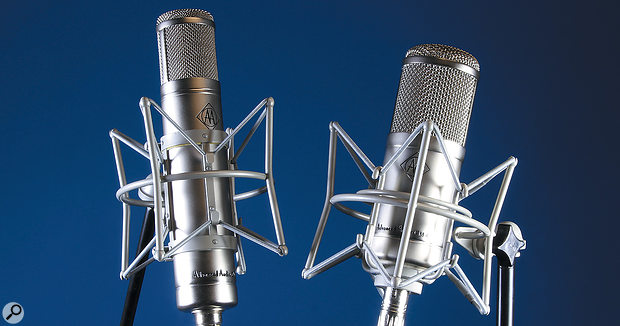 Advanced Audio mics aim to provide vintage German tone but at a fraction of the price of the classics. Have they succeeded?

Located in the hills bordering Lake Okanagan in British Columbia, Canada, Advanced Audio are the brainchild of electronics engineer David Thomas, whose background is in microphones and signal-processing technology. It seems he's done the rounds of the industry from repair to design, and for many years was the technical director at Ocean Sound Studios in Vancouver. In recent years he's gained the reputation of being able to modify fairly inexpensive microphones to significantly improve their quality, and he's since adapted this ethos to produce his own branded microphones, which might be considered as pre-modified stock microphones.

Under the Advanced Audio banner, David offers both FET and valve microphones based on, but not directly copied from, some of the most sought-after classic models (and he plans to add mic preamps to the range in the near future). Various capsule configurations are available, and Advanced Audio make both FET and valve models of the two mics reviewed here. Apparently his mics start life in China, then key parts, including the valve (AA generally fit Sovtek valves), the transformer and crucial capacitors, are replaced with more highly specified parts — hence the surprisingly affordable nature of these microphones.

Shipped in an aluminium case and with an included shockmount, the CM12 (pictured left) is a large-format capacitor valve microphone, where both the capsule and circuitry are based on the classic AKG C12/ELA M251. Its AK12 capsule is an edge-terminated, dual-diaphragm design skinned with German mylar and with a claimed frequency response matching that of the original C12 within ±2dB.

Despite its name and general appearance, though, the CM12 isn't just a slavish clone. The differences lie mainly in the preamp, where a 6072A dual-triode valve is deployed as a high-input-impedancepreamp feeding into a cathode follower to produce a very low output impedance, enabling the use of a balancing/matching transformer with just half the turns ratio of the original C12's transformer — a strategy that provides an additional 6dB of headroom and an extended frequency response when compared with the original. In fact, their BV11 dual-bobbin transformer output draws its inspiration from the ones used in Neumann's M49 and M50 microphones, and can operate down to 10Hz with the ability to deliver levels of up to +18dBm with less than one percent distortion. David states that he chose 6072A tubes as they are very quiet and are much less susceptible to microphonic pickup than the metal-clad VF14 tubes used in the original U47. They are also readily available, unlike the 'rare as rocking-horse droppings' tubes used in many original vintage microphones.

The frequency response of the microphone is quoted as 15Hz to 20kHz, and nine pickup patterns are available via a selector switch on the power supply. As with the original, these cover omni through to figure-of-eight, with various widths of cardioid pattern in between. There are no low-cut switches or pads on the mic body or the power supply, so such niceties have to be taken care of at your preamp or mixer. The EIN noise figure is 17dB (A-weighted), which is typical for a decent valve mic though not as low as some solid-state designs. These specifications, while useful, do little to tell you how the mic actually sounds, however.

AKG's original C12 had a reputation for giving an airy lift to vocals, particularly female vocals, where it would help them sit clear of a busy mix. When AKG launched the modern C12VR, many hoped that this would recreate the original C12 sound, but although the C12VR is a nice enough mic in its own right and, again, is well-suited to female vocals, it doesn't really sound like the original. With the CM12, vocals come across as airy and well-focused but without the grainy edge that some mics seem to impart. There's just an inherent 'rightness' to the sound that's hard to put into words, and though the mic's voicing actually flatters the sound source to some extent by enhancing the highs, it still gives the impression of sounding natural, making it a good choice of mic for anyone who needs to add a breathy, intimate quality to their vocal sound. It is also well suited to most female vocals. Tests on acoustic guitar also confirmed that it was able to deliver a lively, tight sound with little or no EQ.

The Advanced Audio CM47 draws its inspiration from the Neumann U47 and, like its muse, it is a large dual-diaphragm, multi-pattern valve microphone. Its AK67 capsule is 35mm in diameter, with a pair of six-micron-thick German mylar diaphragms, and appears to be modelled closely on the original — though its frequency response lies somewhere between that of a U47 and a U67, with extended highs and lows when compared with the Neumann K47 capsule. As with the original, the capsule is set high up in the basket, which is said to make the microphone less susceptible to sibilance problems, though a little sibilance was still evident on some voices.

Once again, the preamp uses a 6072A valve configured as two stages as per the CM12 circuit, but this time driving a BV8-type transformer and claiming a better transient response than the original Neumann circuit. Again, the EIN is 17dB (A-weighted), this time with an output capability of +20dBu with less than one percent distortion into a 1.2kΩ load. The overall frequency range is roughly the same as for the CM12, but with less emphasis added to the highs.

Looking inside the mic again reveals a typical Chinese chassis but with the upgraded parts clearly visible. All the soldering is very neat, with a generally solid mechanical construction free from significant rings or resonances. The PSU looks identical to that shipped with the CM12 so, once again, pad and roll-off switches are absent.

Pattern switching is done from the included power supply, the rotary switch accessing nine patterns ranging from omni, through various widths of cardioid to figure-of-eight. As with the CM12, the mic comes in an aluminium camera case complete with PSU and multi-pin XLR connecting cable, a foam wind sock and a shockmount cradle similar to the ones supplied with other Chinese microphones.

Tonally this microphone is noticeably different from the CM12, with a fuller overall sound and far less emphasis on the highs. The lows are weighty but not flabby. It isn't a dull mic by any means, though the highs are much more silky sounding and less obviously airy than from the CM12. This is a good choice of mic for anyone who needs to have the rough edges of their voice smoothed over while the mids come over strongly, making it easy to sit the vocal in a mix. Overall, it has something of a Neumann-esque quality, though despite its rounded tonality it can still capture sibilance with some singers.

Both these mics perform extremely well within their price points, confirming that the 'modded Chinese mic' approach can produce excellent results while remaining affordable. Their noise floor is not exceptionally low, but in routine close-miked applications it certainly isn't an issue. To my ears the CM12 has a much more airy sound than my AKG C12VR, with a more controlled low end, and it also works really well on acoustic guitar. When choosing a vocal mic it always comes back to finding one that best suits the voice, and with these two mics there are two quite different characters from which to choose — I certainly have no complaints given the affordability of these two microphones.

While there are too many similarly priced alternatives to list them all, check out the valve models from Rode, MXL and SE. At the more expensive end of the market, Peluso also make Neumann-inspired models.

Both these mics have a tonal character, rather than being neutral, which means you have to match the mic to the voice. The quality improvement through the upgraded components is definitely worthwhile, delivering near high-end performance at a mid-level price.