About six years ago, AKG launched their Perception range of mics to meet the needs of the home‑studio owner who wanted good quality, but at a lower price point than AKG's more traditional studio microphones. The Perception 120 USB is the company's first USB mic, and it works right out of the box, with no need for drivers, on both Windows (XP, Vista and 7) and Mac OS X machines. It's aimed at those working on podcasts or home‑video sound, but it should also well‑suited to musicians who want to record on the move, as they won't need to carry a separate bulky audio interface. 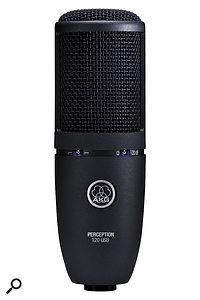 The mic, based around a 2/3‑inch, cardioid capacitor capsule, has the chunky, reassuring feel of other models in the Perception series. On‑body switches provide bass cut and a 20dB pad, which are useful options. The package comes complete with a manual, a tripod table‑stand, a swivel mount, and a USB cable that plugs in to a USB socket, which is located where the XLR output would be on a normal mic.

I've never been a huge fan of USB mics. Most are let down by their 16‑bit converters, but this model uses 24‑bit converters with 128x oversampling. This both brings down the noise floor, and — more importantly — means that the mic will give good results over a much wider range of sound levels. However, unlike some competing products, there's no in‑built line or headphone output.

The Perception 120 USB worked right out of the box, with blue LEDs behind the two switches lighting up when the mic is powered via its USB connection. Under Mac OS Snow Leopard (I used Logic to test the mic), I was able to choose the mic as the input source and keep the Mac's built‑in audio as the output. A colleague tested the mic on a Windows 7 PC running Cubase and was similarly able to record via this mic and play back through the built-n audio using a generic ASIO driver. The input mic gain could be adjusted in the Mac or PC's generic audio settings to get a sensible recording level.

AKG don't seem to provide much in the way of detailed technical spec on this model but from a practical viewpoint I found nothing to worry about in either its noise performance or its ability to capture sound. On fairly quiet speech the mic exhibited a commendably low level of background noise, as well as delivering a clear, confident sound. It also demonstrated a better‑than‑usual resistance to popping when used without a windshield, courtesy of some extra screening inside the basket (though I'd still be inclined to use a pop screen when close‑miking vocals). As a way of getting good quality vocals or other sounds into a laptop without needing to buy anything else, this model takes some beating. Paul White