Making Music On The Move By Nick Rothwell

Mira is the first incursion into the iPad app world from Cycling '74, the makers of the popular Max graphical software toolkit for audio and media applications on Mac and PC. Max is widely used for performance and installation work, so there's an obvious opportunity for an iPad-capable, touch-sensitive interface for controlling Max patches. 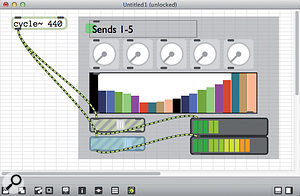 Making a Mira patch, and the finished product. 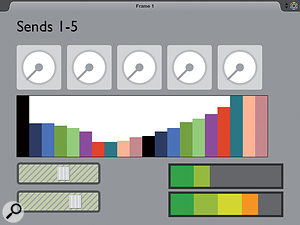 Mira certainly isn't the first app capable of controlling Max: on my iPad, I have TouchOSC, Mrmr, Konkreet Performer and Lemur, all of which are capable of turning multitouch gestures into OSC (Open Sound Control) and (in most cases) MIDI. However, these apps require a degree of configuration — OSC message names, MIDI controller and channel numbers — and if you want to design your own interface, it can be a fiddly and time-consuming process. Max users are already assembling interfaces in Max itself, so why do it a second time on the iPad?

This is where Mira comes in. There's no separate interface design involved, and very little configuration. Mira takes a rectangular area of a Max patch and mirrors it on the iPad: buttons, dials and sliders in the patch appear on the iPad, and changes to the controls are reflected in Max and in Mira simultaneously. You can only edit the patch in Max itself, but changes appear on the iPad immediately.

Mira isn't providing a virtual screen (and mouse) into the patch: all the Mira controls are running natively on the iPad, and multi-touch is supported. You can touch-and-drag several dials or sliders at once, while the multislider accepts multi-touch directly, and the piano keyboard object is truly polyphonic. Mira is fast and responsive, although the resolution for number boxes is a little too fine to set values accurately. Most objects look pretty much identical in Max and Mira, but some (such as sliders) have been redesigned for the iPad. Object attributes in Max (colour, transparency, font and so on) are reflected pretty faithfully, and positioning and alignment seem accurate, except for some of the wackier font styles and sizes. At present, only a subset of Max's graphical objects are supported (they're labelled with a special icon in Max); it's likely that more will be added over time, but I suspect that exotic ones like Jitter and JavaScript frames might not make the cut. Unfortunately, bpatchers are not yet supported, so nested sets of controls won't be displayed, making complex interface designs difficult.

Setup is simple: you have to download some additional files for Max itself (OS X only at this stage; Windows versions are apparently forthcoming), but the Mira app provides a usage tutorial. I had a few crashes when trying to use my LinkSys router (already fixed as I write this), and some routers might be configured to block the connection, but an ad-hoc network on my MacBook Pro worked fine. Mira discovers the Max 'server' automatically and several iPads can apparently connect to the same patch at once.

The starting point in Max is an object called mira.frame, which outlines the area of a patch to be presented in Mira. Multiple frames are permitted, and each one forms a separate tab in Mira. Accompanying mira frame is a new, dedicated object called mira.multitouch which provides a rectangular pad for multitouch gestures, including tap, swipe, pinch and rotate, with on-screen feedback and a wealth of output data. A third object (mira.motion) provides data feeds from the iPad accelerometer, gyroscope and magnetometer. Multitouch and motion should provide more than enough gestural information for the most sophisticated Max instruments and effects.

I tried using Mira via Ableton's Max for Live. On the whole, it worked fine, but I often ended up with duplicate tabs and panels in Mira. This is probably because Max for Live runs inside Live, while its editor is a separate copy of Max, so Mira would see two separate servers. This is a minor (and hopefully fixable) irritation, and if you aren't editing you shouldn't be affected by it.

While it's not as flashy as Konkreet Performer and doesn't have the physics modelling and finish of Lemur, Mira is a wonderfully neat idea and well realised. For iPad-owning Max users, it really is a must-buy. Nick Rothwell

POJ Studios' iTrigger is a grid-oriented MIDI controller app for the iPad. 'Oh, not another one', I hear you say, and indeed when you fire it up you're presented with a familiar button grid alongside a small collection of special-purpose controls. The visual design of iTrigger could charitably be described as utilitarian: the colour palette appears to be straight out of the ZX Spectrum, while the only concession to physical familiarity is some rather crude drop-shadows on the buttons. If we'd had grid controllers in the days of MS-DOS, they would have looked like this. 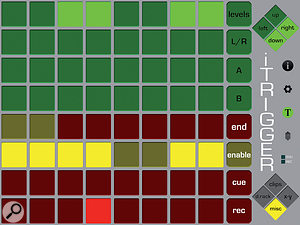 The iTrigger interface is perhaps reminiscent of a bygone age of computing. The documentation for iTrigger consists of a 15-page setup guide, but this concentrates on setting up wireless MIDI and connecting the program to Ableton Live as a clip launcher and mixer. iTrigger imitates a Novation Launchpad, so the setup for Live is really just a case of declaring that the network MIDI device is, in fact, a Launchpad. In landscape mode, the on-screen grid is eight buttons high by nine buttons wide, emulating the Launchpad's eight-by-eight grid plus a column of scene launch buttons. The smaller dedicated buttons switch to note-playing mode or the equivalent of the Launchpad's mixer page. The colours of iTrigger's buttons change to approximate the hues and brightness of the Launchpad's tri-colour LEDs. If you've used a Launchpad, using iTrigger requires no great conceptual leap, but it is missing a mode for the zoomed-out Session Overview that navigates Live's Session eight slots at a time. (This could obviously be added in a software update.)

Overall, I'm struggling to find a convincing use case for iTrigger. If you want a dedicated iPad-based controller for Live, touchAble is better integrated and more comprehensive, or there's LiveControl 2 for the Lemur platform (and an equivalent for TouchOSC). For general MIDI control, Lemur and TouchOSC again come to mind, although you'd have to design a template or use one of the many available for download. If you really want the authentic Launchpad experience, you are far better off saving your pennies for a real Launchpad. Nick Rothwell