Making Music On The Move By JG Harding & Mike Watkinson 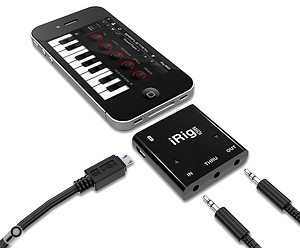 The iRig MIDI offers MIDI In, Out and Thru, as well as charging via USB while the interface is in use.

IK Multimedia's iRig MIDI is not the only MIDI interface for iOS devices that's currently available, but it does have some unique features. What sets the iRig MIDI apart from its competitors, such as the MIDI Mobilizer by Line 6 and Yamaha's iMX1, is the presence of a MIDI Thru socket, and the fact that you can charge your iOS device while the MIDI interface is in place.

The interface comes supplied with two 1.6m mini‑jack to five‑pin MIDI cables for connecting instruments and controllers, as well as a very short mini-USB cable to connect to a charging adaptor. Apparently the short length of the charging cable was determined by Apple, in order to ensure that sufficient charge could be guaranteed to reach the device. The iRig MIDI also features two LED indicators to indicate active MIDI In and Out connections.

The iRig MIDI does feel a little flimsy (don't tread on it) and, as with all interfaces that use the dock connector, it does come with the worry that something might snap if stressed while in use. I also noted a similar gripe to one I had with the Apogee Jam: the interface doesn't click into place (unlike the original iPhone charging cable) and feels as if it might work itself loose in a live situation. 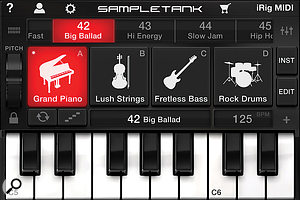 Sampletank Free is available for use with iRig MIDI, and has a variety of instruments built in to get you started.Plugging in the iRig MIDI will prompt the user to download the free iRig MIDI Recorder app. This has the ability to record and play back freely‑played MIDI sequences and SysEx dumps (remember those?). While it's not a particularly inspiring app in itself, it will allow you to troubleshoot the device and install firmware updates.

The packaging also advertises that SampleTank Free comes free with the iRig MIDI. Well, it's free anyway, but nonetheless gives you a basic range of sounds to play with if you haven't bought any other apps yet! The paid version and sound packs that can be purchased in‑app are doubtless impressive, but they are certainly not free.

Although I can already send MIDI data into the iPad using a compatible USB MIDI keyboard controller — like the latest version of M‑Audio's Oxygen 25, for example — and Apple's Camera Connection kit, the iRig MIDI allowed me to connect a great variety of legacy MIDI equipment. MIDI Thru and MIDI Out also worked flawlessly with apps that output MIDI data, such as Pianist Pro and Little MIDI Machine. If you're still using the on‑screen keyboard in the GarageBand app, then using an external keyboard to play the built‑in instruments will reveal an extra dimension of touch sensitivity you never knew was there!

While it isn't cheap considering the build quality, you'll find that if you want to use an external MIDI device that doesn't work via the Apple Camera Connection kit, you wish to use MIDI Thru and you'd like to charge your device while using MIDI connectivity, the iRig MIDI is the most sensible choice currently on the market. Mike Watkinson 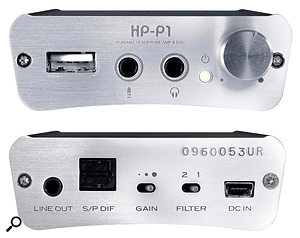 The Fostex HPP1 is small, light and sturdy, drawing its power from an internal battery that can be charged via USB.

In the land of digital-to-analogue convertors (DACs), USB is becoming increasingly popular: many of the DACs built during the last few years will have a USB input, and it'd be odd if USB connectivity weren't at least an optional extra. I think this is a great idea for a number of reasons, not least because it allows the DAC to be used in portable setups, especially if the DAC includes a headphone amp too.

Apple's iOS devices transfer data in a different way to standard USB devices, so plugging a 30-pin to USB Apple dock cable into a standard USB DAC simply won't work. For this reason, Fostex have released the HPP1, a portable DAC and headphone amp for iOS devices.

There's no denying that the HPP1 is a quality product. It's lightweight, yet feels nice and solid and is made of aircraft-grade aluminium. It comes with a rugged soft case, as well as a USB cable for charging the internal battery and a short USB-to-dock connector for plugging in your iOS device. It's compatible with all the most recent iOS products, but do check the Fostex site to make sure before you buy.

The DAC can't charge your iOS device, so you'll find that while you're using it, both the HPP1 and sound source will be running out of juice unless you plug the HPP1 into USB power, in which case your iOS hardware will give up on its own.

As is becoming more popular with DACs, there are multiple settings for the reconstruction filter. Filter 1 is a steep linear‑phase filter, similar to the kind found in most portable devices, while filter 2 uses a more sophisticated minimum‑phase design. Sound wise, setting 2 is superior, especially in the high‑mid and high frequencies. It's very revealing, with much more separation between instruments and sounds. Minimum-phase designs like filter 2 exhibit no pre‑ringing, unlike linear‑phase designs, the audible result being that the timing and separation of sonic elements tends to be clearer and more noticeable.

I found the artifacts of Filter 1 more flattering to the music, especially when listening casually to less spacious mixes, as they blur and disguise sonic imperfections. Filter 1 can be comforting, but isn't as suitable for production or critical listening, as it's far more detrimental to sound quality than the practically undetectable phase discrepancies of a well-designed minimum‑phase filter. As you can probably tell, filter 2 is my desired setting for the most part, and my descriptions that follow are from using the HPP1 with this setting.

At one point I had some issues with little pops and clicks in my headphones, which I solved by switching the host device off, then powering it on again. This little glitch only happened once during my review but I've seen it mentioned online, and it's always solved in the same manner, since it's caused by the host device, not the HPP1. Also, if you're using the HPP1 with the iPhone it will pick up some GSM interference from phone, GPRS and EDGE transmissions.

The HPP1 is supplied with a short dock cable for connecting your iOS device to the USB port on the front.Listening to some tracks I know well, like 'Never Going Back Again' from Fleetwod Mac's Rumors, was actually quite intimidating when using the HPP1! The attack and weight of each finger‑picked note was evident, and every instrument was separated immaculately from the next. Likewise, listening through the HPP1 to recordings I made using Multitrack DAW for iPhone, I could hear the changes I was making with built‑in effects much more accurately than when I used the iPhone's headphone output.

The HPP1 has a little emphasis on the low end, but it's a very smooth emphasis that's not at all overbearing. Meanwhile, the ultra-highs are also quite smooth, and a tiny bit lacking in sparkle at the very highest registers. These are extremely minor notes, though, and my main point of comparison for the HPP1 was the Becnhmark DAC1, which carries double the price tag!

The sound produced by the HPP1 is totally 'grain-free' in the high‑mid frequencies, which can be a problematic range for DACs: cymbals and hi‑hats won't be shearing your ears off unless that's what's in the recording. The stereo field is wonderfully round and three‑dimensional too, and gives a real sense of live performance and space. Just like the Benchmark DAC1 I use for my main monitoring, the HP P1 really does show up over‑compressed pop and rock music as being a bit dead and lifeless. It's very honest, unlike a flattering and enjoyable consumer DAC, which is precisely what most of us interested in pro audio want

Despite the excellent conversion quality, there are a couple of cons to the HPP1. The most obvious is the price: it does sound brilliant, and if it had an S/PDIF or standard USB input as well as an iOS input, it could be your main DAC for monitoring, headphone amplification and portable iOS duties. This would make it a bargain of sorts, but as it is it only works with iOS devices.

There's no questioning the quality of the HPP1 as a DAC and headphone amp: it's top class. The minimum-phase filter setting is pristine and revealing, and the three gain levels allow it to drive headphones of all kinds, from sensitive IEMs to large and inefficient Sennheiser HD650s. Whether or not the HPP1 is right for you will depend on how serious you are about using iOS devices for audio, and I can't help but be a little frustrated that such a lovely sounding, lightweight and sleek piece of kit is limited to iOS input. It sounds nice enough that if it had a standard USB or S/PDIF input as well, I'd take it everywhere!

The HPP1 is a significant investment, designed for those who are very serious about iOS production or listening. As the quality of applications for iOS increases and we head towards the inevitable merging of iOS and Apple OS, more and more users may find such a device handy to have around. J G Harding