Apple launched Music Memos alongside an update to GarageBand for iOS at the beginning of 2015, and recently updated the app to support Bluetooth audio devices (iPhone 7 users rejoice) along with a few other improvements. The idea behind Music Memos is fairly straightforward: you play (or sing, if you’re a good-enough singer) something into the app, and Music Memos analyses the recording and adds a drum and bass-line accompaniment.

The interface is — at least initially — incredibly sparse, dominated (despite its small size) by a record button in the middle of the display. In addition to pressing this to initiate a recording, you can also enable automatic recording by tapping the Auto button in the top-left. In this mode, Music Memos will monitor the audio input and begin recording if it hears something appropriate. Opposite the Auto button is a tuning fork icon, which opens the app’s built-in tuner — if nothing else, Music Memos maybe worth downloading just as a free tuner app. And, last but not least, there’s a filing box icon that takes you to a searchable list of your ‘Ideas’. 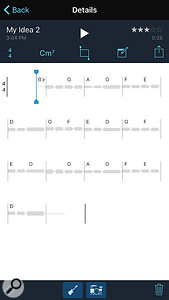 As you’re recording, a waveform will be drawn at the bottom of the interface, and, once you’re done, press the circular button again to end the idea. You can preview the idea straight away, and toggle whether or not to hear the drum or bass accompaniments. By tapping the idea, you’ll open it in a full-display editor, like the one in the screenshot. You’ll see Music Memos made a commendable stab at deducing the chords (though far from perfect), but the timing seemed pretty tight (more on this later). However, if you listen to the examples on Apple’s web site, they use either a rhythmic guitar or piano chords as a source, and these sound a good deal better than my first attempt. So I recorded a rhythmic piano track instead and enjoyed similar results.

There’s a surprising amount of edits you can make to tweak an idea. You can change the time signature (between 3/4, 4/4, and 6/8) and adjust where the downbeat is, and you can edit the suggested chords and the range over which they’re held. It’s also possible to trim the length of an idea, add a note (which, in a nod to guitarists, includes an option to set on which fret you placed the capo, and any alternative tuning used), and finally, you can rate and tag the idea for future reference.

In terms of the accompaniment, if you tap and hold either the bass or drum buttons, a pop-up will allow you to customise the performance for that instrument. Common to both instruments is the complexity/loudness X/Y controller that will be familiar to users of GarageBand’s and Logic Pro’s Drummer feature. You can also choose between an electric or an upright bass, and a modern or a vintage kit; and in the drum page, it’s possible to set whether the third drum used (after bass and snare) is either closed hi-hats, a cymbal ride, or a tom.

Once you’ve tweaked your idea, you can save it to Dropbox, iCloud or iTunes as either a stereo mix (with bass and drums), an audio file containing only your recording, or as a GarageBand project that can be opened by Logic Pro or GarageBand on your Mac. You can also export an idea to another application on your iOS device, such as GarageBand, which is rather neat. If you open an idea in Logic, you’ll notice it consists of three tracks: an audio track (no surprise there) with your recording, a Drummer track, and an instrument track playing an EXS24. If you chose Modern Kit, your Drummer will be Darcy, playing “simple tasteful pop beats on a natural sounding kit”, whereas if you selected Vintage Kit, Mason will inspire you with his “loose, swaggering beats on a vintage kit”. The EXS24 instrument will be either ‘P-Bass iOS small’ if you chose electric bass or ‘Upright iOS small’.

Something else you’ll notice by opening an idea in either Logic or GarageBand is the Tempo Track. Music Memos constantly tracks the tempo as you record an idea so it can keep the accompaniment in time as you speed up or slow down. This results in a tempo change every quarter note, and even playing precisely at 120 bpm, I noticed subtle variations between 119 and 122 bpm over the duration of the that idea.

Will Music Memos be useful to hardcore readers of this magazine? Likely not. However, that said, I do know many composers who hum ideas into their iPhones when they’re out and about. And if that sounds like you, why not hum into Music Memos rather than Voice Memos?