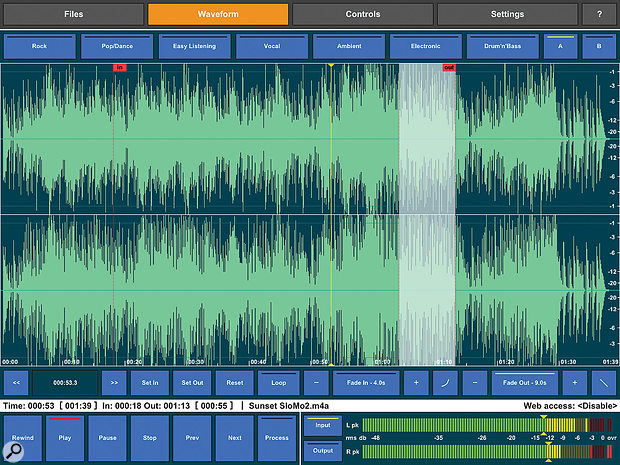 Audio Mastering's waveform view, where you can add fade-ins and fade-outs, and set in and out points.

Although perhaps still regarded as a toy by some, the iPad is carving out a niche as a serious mobile music production platform with apps like Auria, the multitrack DAW, and supported by high-quality audio interfaces, as we've seen elsewhere in SOS.

One piece missing from the jigsaw until now has been any facility for mastering, but this is addressed by Igor Vasiliev's new Audio Mastering app, which packs a surprising number of features into a relatively straightforward GUI. Igor has teamed up with plug-in developer DMAX, who recently released a suite of mastering plug-ins for the Mac (reviewed in Sound On Sound June 2013), and ported the same high-quality algorithms of those effects to the iOS platform. The tools on offer are:

The app also features preset hotkeys, with the ability to create your own presets. You can apply processing to one or a group of files, and all processor settings are stored with each file. Fade-ins and fade-outs can be added with three different fade curves, and you can set in and out points manually or on the fly. One thing the GUI does not allow — and which is certainly something we have come to expect from iOS audio apps — is the ability to pinch-zoom the waveform for more accurate placement of in and out points. If future developments to Audio Mastering include audio editing (which this version does not), perhaps that facility will be added.

The lack of an equivalent to iOS's camera roll is still a headache for those working with audio, and Audio Mastering works around this by supporting iTunes file sharing (so you can copy files to and from your Mac), Sonoma WireWorks' AudioCopy/AudioPaste protocol, and file transfer through its own internal web service. The recent update has also added 'Open in...' support, so you can pass audio directly to the app from email, or other supporting apps such as Twisted Wave (a great audio editor).

Sample rates up to 96kHz are supported by iOS (although you will need an external audio interface to hear the benefit), and Audio Mastering supports MP3, M4A, AIFF and WAV file formats, so you can potentially record and mix at 96kHz and 24-bit in Auria, then pass the stereo mix across to Audio Mastering.

I must admit that I was sceptical about the performance of a £6.99$9.99 app as a mastering suite, but once I'd used it, I was very pleasantly surprised. The audio quality is really very good indeed. You can hear unpleasant artefacts if you push it too hard, of course, and best results will be obtained only with a decent pair of monitors and a high-quality external audio interface, but now it really is possible to make meaningful mastering decisions on stereo files using just an iPad. Recommended!