The Duet 2 was reviewed in the March 2013 issue of SOS, but Apogee have already released an updated version of the design suitable for use with both iOS devices and Macs and, to make this absolutely clear, the new name is Duet For iPad & Mac. 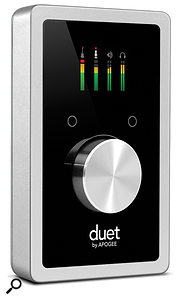 The plus points noted in the Duet 2 review remain: typical Apogee sound quality, a useful (but small) OLED screen, assignable touch-pads... But by revising the internal hardware to support iOS devices, Apogee have significantly widened the appeal of the Duet to include all those who wish to make high-quality audio recordings on a mobile device as well as on their Mac.

The rear panel of the new Duet features a further socket that will please those of you who held off buying the Duet 2 because of its lack of MIDI support: a USB type A socket supporting 16 channels of MIDI I/O. It has to be said, though, that the omission of a USB cable from the supplied cables seems a little stingy on Apogee's part, especially given that this is not exactly a budget interface. On the other hand, you do get a dock connector (old-style 30-pin) to mini-USB lead (which powers your device and conforms to Apple's 'Made For iOS' program), a mains adaptor and a breakout cable with two XLR/TRS combi input sockets and two TRS output sockets. Owners of iOS devices with Lightning connectors will need a suitable adaptor.

Most of the features of the free Maestro II software for Mac have been ported across to the free Maestro iOS app, including volume controls (which update the position they display depending on the position of the single hardware control) and switchable soft limiting to guard against clipping. One feature missing from the Maestro app is the ability to switch sample rate. Due to the nature of iOS, this is achieved within the app used for recording, if that app supports multiple sample rates. Rates of 44.1, 48 and 96 kHz are supported by iOS itself, so an app like Auria would allow you to record at this rate using the built-in hardware or the Duet, but you are only likely to hear the benefit using the Apogee. GarageBand's sample rate is non-selectable, and so remains fixed at 44.1 kHz.

I was, as usual, impressed with the sound quality afforded by Apogee's gain circuitry and A-D/D-A converters. The rogue noises noted in the Duet 2 review when adjusting input gain are still there, and are especially noticeable the first time you adjust gain after selecting a new channel; almost as if the pots are dirty! That's a bit odd, considering that this is an all-digital system.

The Duet 2 was a good bet for Mac, so this new Duet has become a great choice if you want an interface with independent headphone and speaker outputs that will support capture and playback of high-quality audio from both your Mac and your iOS device.