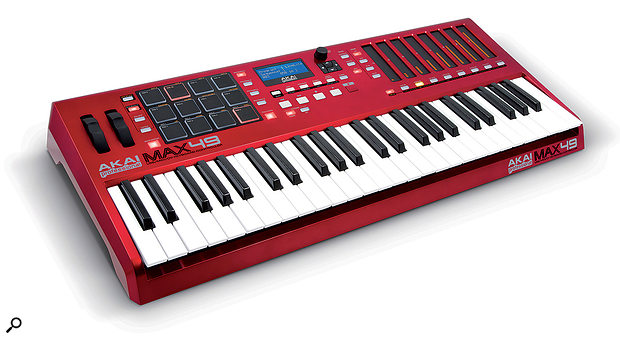 At first glance, the Max49 seems much like other controller keyboards, but it's got a surprise up its sleeve...

Given the huge choice of MIDI controller keyboards on the market, what might tempt you to choose one over another? Akai may have the answer with the Max49, a fashionably red and rather handsome example of the genre, with some unusual aspects that set it apart from the crowd.

Comprehensive MIDI control is, of course, the name of the game, and to this end the Max49 offers a four-octave velocity and aftertouch-sensitive keyboard, 12 pads (also with velocity and aftertouch), eight buttons, and — its most distinctive feature — eight touch-sensitive ribbon faders. Interestingly, there are no rotary controller knobs; the ribbon faders are the primary method of sending continuous controller messages on the top panel. While these faders (and the absence of knobs) might not be to everyone's taste, they do have distinct advantages; they're impervious to dust and grit, and, unlike physical faders, they allow you to make instantaneous value changes simply with a light touch of the finger (an LED ladder on each fader tells you its current position). DAW transport control buttons and pitch and modulation wheels complete the basic performance controls, with cursor buttons and a rotary encoder providing navigation around the edit menus in the LED display, parameter value adjustment and preset selection. The remaining buttons govern the built-in arpeggiator, step sequencer, octave shift, fader bank and pad bank selection.

Hands Across The Decades

Around the back, we find a USB port, MIDI In and Out, and three assignable footswitch sockets. We also find the Max49's trump card: CV and Gate connections. These operate at 0-5V with 1V per octave, giving a five-octave range when used with external analogue synths. This forward (and backward) thinking allows the Max49 to communicate with synths spanning six decades! Although the Max49 is USB bus powered, a 6V PSU input is provided (and the PSU itself is included). The PSU is necessary to provide sufficient power to the CV/Gate outputs if you're using the Max49 with a computer at the same time. The Max49 therefore acts not only as a controller for analogue synths, but as a MIDI-to-CV converter for information coming from your DAW. With the current resurgence of new analogue synths, this should make the Max49 especially appealing to retro-minded musicians.

Controls To The Max 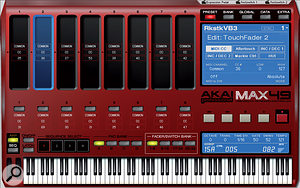 Four banks of faders, buttons and pads provide an effective total of 32 buttons and faders, and 48 pads. Each individual controller can be assigned to completely different tasks, MIDI channels and outputs; faders can send CC data, aftertouch, NRPNs and Mackie/HUI control data. Buttons (togglable or momentary) can send CC data, notes, program/bank changes or Mackie/HUI control data. Pads can generate notes and program/bank changes and, when sending notes, they respond to aftertouch. The pads also have a Note Repeat function (momentary or latchable); the time division of repeated notes is selectable directly from the eight buttons, and is sync'ed to the Max49's internal tempo or a DAW's external tempo. Aftertouch is very effective when used with Note Repeat, making dynamically variable drum rolls a cinch. The pads are apparently the same as those on Akai's MPC Renaissance; they're also the most effective pads I've encountered on a controller keyboard, responding accurately to velocity with the minimum of misfires. For times when you need to guarantee that the pads will trigger events at full velocity, engaging the Full Level button will ensure just that.

Also worthy of note is the semi-weighted, synth action keyboard; unlike the typically feather-light action of many keyboards of this type, it has a satisfyingly firm touch, lending itself to better control of velocity. My one criticism is that the black notes produce higher velocities more easily than the whites; this seems common on keyboards with shorter than normal front-to-back scales. No doubt there's a leverage/angle of momentum law of physics thing going on here.

The Max49 comes pre-loaded with 16 non-rewriteable presets for controlling a selection of DAWs, comprising templates for Live, Reason, Cubase, Logic, FL Studio, FX Guru, Pro Tools, Mackie Control and devices using the HUI protocol. These can be edited, and saved to any of the 16 User presets, two of which are already occupied by Pad setups for GM drums and a chromatic scale.

All of the Max49's controllers are reassignable and reconfigurable in numerous ways, so it's just as well that editing via its own LED display is a breeze. I managed to discover pretty much every function without reference to the manual. However, if you find editing via small LCDs about as much fun as doing your tax return, the bundled Vyzex on-screen editor is there to smooth furrowed brows (see the 'Vyzex Editor & Akai Connect' box).

The Max49's step sequencer is an unexpected inclusion for a controller of this type. Four custom sequences of up to 32 steps can be stored in every preset; simply hold the Seq Select button and choose one from the lowest four pads. Each sequencer step includes note number, velocity and controller value (the CC number is assignable), while the eight buttons act as mutes for any step; adjacent notes can also be tied. In edit mode, each step's note number and controller value can also be set from the touch faders on the fly, allowing for wacky live randomisation effects.

No keyboard controller would be complete without an arpeggiator, and this one offers all the standard octave range, up, down and random patterns, with adjustable gate time and swing. Custom rhythm patterns can optionally be applied to break up an arpeggio's regularity, by specifying 'rest' points along a grid of up to 16 steps in length. Arpeggiator playback modes are selected from the pads, and can be changed on the fly. The time divisions of both the step sequencer and arpeggiator are also selectable live from the eight buttons; all initial arpeggiator settings are stored along with each preset.

Akai have been very shrewd including CV/Gate outputs, along with classic step sequencer functions, on the Max49. Both are sure to appeal to analogue aficionados. These, plus USB and MIDI connectivity give the Max49 control over generations of synths dating back 50 years, and a reasonable chance of longevity in these times of planned obsolescence. I also like the Max49's appearance, its solidity of construction, the high-quality playing surfaces and those touch faders. Now, if Akai were to expand the Max range with larger 61, 76 and 88-note models with added rotary knobs...

The Max49 offers many facilities that are similar to its competitors. However, it (and its cut-down, two-octave sibling, the Max25) is the only one to include both CV/Gate connections and an integral step sequencer, which make it unique in its class.

For those who prefer to do their editing graphically, the bundled Vyzex editor provides a broader canvas with which to create custom presets. When instantiated, Vyzex copies the Max49's entire internal memory to the editor, placing the currently selected preset into its edit buffer, ready for tweaking. Using Vyzex is extremely intuitive: press a button, key or pad, move a wheel or touch a fader on the Max49, and the editor screen updates to focus on the parameters for that object. Saving your creations also includes a safeguard to protect the Max49's internal memory against accidental overwriting; once a preset is edited, two options appear: 'Store' and 'Sync'. Store writes the new preset into Vyzex's current preset setup, but leaves the Max49's internal memory unchanged. This way, you can create a 'Set' of custom presets, then save that Set to disk for future recall. However, if you wish to rewrite the Max49's internal memory with your new presets, choose Sync instead of Store.

Whilst Vyzex works like a charm, I had less success with Akai Connect. This bundled application is designed to 'wrap' your VST plug-ins so that they can be controlled by the Max49. Without describing the process in detail, I could only get plug-ins to respond to Connect's on-screen faders and buttons, but there was no response at all from the Max49's controls. When more than one 'wrapped' VST was running, there seemed no way to change Connect's controls from one plug-in to another, and with no support documentation of any kind to help, I was stumped on this one. Judging by comments on Akai Pro's forum, I was not alone with these issues.

With the extensive programmability expected from contemporary controller keyboards and an interesting alternative to physical faders, the Max49 also speaks to the past with its CV/Gate outputs and in-built analogue style step sequencer. Its solid build, together with a keyboard and drum pads that actually feel good to play, should inspire confidence and encourage creativity.