Apogee's Duet 2 puts the company's famed A-D/D-A conversion into a box that's attractive in terms of both styling and price... 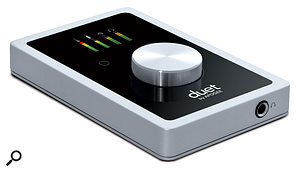 Apogee Electronics are best known for their history in high-end A-D and D-A converters and interfaces that feature in many top studios' equipment lists. In more recent times, the company, while keeping a keen eye on its higher-end niche, has placed an increased focus on the mobile musician who records on a Mac laptop running Logic and/or Garageband. Core Audio compatibility in their products also allows Apogee to address applications such as Pro Tools, Cubase, Nuendo, Ableton Live, Digital Performer, and so on.

It has been three years or so since the introduction of the first two-in/four-out Duet audio interface. Since then, Apogee have not rested on their laurels, introducing the One mono-in/stereo-out variant a couple of years back, and now bringing us the vastly upgraded Duet 2.

Just as the original Duet interface incorporated design cues and Firewire connectivity from its contemporary MacBooks, so the Duet 2 features the black/aluminium and USB 2 connector of the present day. This has produced a very cool-looking chassis that fits right into the modern Mac environment.

The external redesign is matched internally by the all-new microphone preamps and A-D/D-A converters. The mic preamps, both with switchable 48 Volt phantom power, have been redesigned to take advantage of advances in component technology, and now feature the usefully wide gain range of 0dB-75dB. The A-D and D-A converters have been similarly redesigned to utilise the latest components, ensuring the highest possible audio performance.

Access to the latest Apogee Maestro 2 software is provided for purchasers of the Duet 2, allowing you to control all aspects of its operation from a single window on your Mac. As well as covering all front-panel functions, Maestro 2 is essential for configuring the various output functions of the two touch-pads: 'Mute Outputs', 'Dim Outputs', 'Sum to Mono' and 'Toggle Headphone Source'.

Physical I/O is mercifully sparse: a single quarter-inch headphone jack to the front and power and USB 2 sockets, plus a small, slim port for the supplied breakout cable, to the rear. The breakout cable fan carries the two analogue inputs on jack/XLR combination connectors, plus two balanced line-level jack outputs. For those of us who don't much like breakout cables, a two-in/two-out breakout box with separate jack and XLR inputs will be coming along shortly. The other two output channels are accessed via the Duet 2 headphone output.

Out of the box, the Duet 2 comes with a Quick Start guide, the USB2 and breakout cables and a switch-mode wall-wart PSU with US, EU and UK plugs, but no software is supplied — you'll find that as a download on the Apogee web site.

Downloading and running the software installer on my iMac revealed a firmware update for the review Duet 2. The installation process was completely painless, and after about 10 minutes and a computer restart, the Duet 2 came to life. The control knob allows you to step through both the input channels and the speaker and headphone outputs, and to adjust the gains and levels respectively.

These, and all other control functions, are accessed via the Maestro 2 software. On the Input tab, you can select line-level (at +4 or -10dB), microphone or instrument inputs individually for each channel, the channel legends and input impedances changing to match your selection. This tab also gives you access to microphone gain, phantom power and phase, plus Soft Limit and the Group switching. Soft Limit is a proprietary process designed to transparently tame transients in the analogue domain, thereby enabling you to maximise level before A-D conversion for best audio performance. The Group function gangs the two mic gains together whilst maintaining any gain offset between them.

The Output tab displays the pre D-A conversion levels of each of the four software outputs and allows you to select those (1-2, 3-4 or Mixer) being sent to the loudspeakers and the headphones. Here you can also Dim, Sum to Mono or Mute either of the physical outputs. These functions, plus Clear Meters (which removes any Over indicator) and Headphone Source selection (toggled between the three software outputs), can be individually assigned to the two touch-pads via the Device Setting tab.

The Maestro mixer's raison d'etre is to provide a low-latency monitor mix whilst recording, and the Mixer tab is where this is set up, combining the two inputs and the software's stereo return as and when required. The final tab is System Settings, where you can select the Duet 2 sample rate (44.1 to 192 kHz, with all the usual points in between, although this is overridden by any DAW settings), the behaviour of the Peak Hold meter function and which output level is controlled by your Mac's keyboard volume control. Overall, Maestro 2 is a well-made, extremely functional piece of software.

As an initial test, I ran the Duet 2 as my iMac's audio I/O and spent some time auditioning both my iTunes library and a hot-rodded CD player through a pair of active monitors. The sound quality of the Duet 2 was very impressive, exhibiting the width, depth and detail that you might expect, given its redesign and pedigree.

The performance of the Duet 2 microphone preamps is similarly exemplary, and I would be more than happy to use them in a serious recording project. It is worth noting that, if you need to use high microphone input gains, a low level of 'zipper noise' can be heard when you change the gain level. Personally speaking, if I needed to whack in 75dB of mic gain on the Duet 2, I'd be reaching for a Cloudlifter or some other such device to boost the source's output long before I got up that far on the dial. With the input set to Instrument, a 'mere' 65dB of gain is available, whereas selecting Line removes the gain option entirely.

Although most of the time the power available to the Duet 2 via your Mac's USB port will be more than sufficient, the inclusion of the wall-wart power supply covers situations of high current draw — for example, condenser microphones in conjunction with high volume levels into low-impedance headphones. The Duet 2 incorporates a sophisticated in-built power management system that automatically reduces the headphone level to protect the phantom power supply if excessive current draw occurs.

Handsome, great sounding, easy to use, with a very attractive on-board display — what's not to like about the Duet 2? The honest answer is — nothing. The forthcoming breakout box deals with my personal dislike of breakout cabless, which leaves only the four-foot, short PSU lead for me to whinge about.

Although you'll find cheaper alternatives, I don't think that you'll find an equivalent that matches the sound quality and the close Mac integration of the Duet 2. It makes me wish I owned a Mac laptop.

The closest alternative that I can think of is the Propellerhead Balance. Although less expensive than the Duet 2, the Balance is close in terms of concept and quality. The Balance is also Windows and Mac OS compatible, making it the only real equivalent available for PC users. Other than that, there's a large number of USB audio interfaces out there to choose from and, if you can't justify having the Duet 2 in your arsenal, your budget and channel count requirements will probably be the greatest determining factors in your ultimate choice.

The Duet 2 builds on the foundations laid by the original Duet, to produce perhaps the ultimate portable two-in/four-out USB audio interface for the Mac-based musician. If you need it, there isn't a single reason not to own it.