Making Music On The Move
By JG Harding & Mike Watkinson 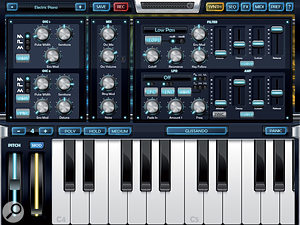 Arctic Keys is one of the more traditional synths available for iPad, so you'll need to use all the subtractive tricks you have up your sleeve to make fresh sounds.

The wording of the press release — "setting a new standard in cool sounds” — creates an expectation that may not be matched by reality, because at first glance Arctic Keys appears to be one of the most traditional synthesizer apps currently available for iOS. It offers a dual-oscillator design with two assignable LFOs, each of which has three modulation destinations. The 16 x 4 gated step sequencer is also hardly a radical offering, but the ability to assign any of the tracks to a modulation destination or loop point enables you to rhythmically control a wide range of parameters, and invites creativity.

The interface is well laid out, given the number of parameters that are editable, and the main edit area displays the synthesizer, sequencer, effects, MIDI and preferences windows to good effect. No use is made of alternative graphic styles or layouts that may be more suited to touchscreens, by which I mean that all controls look as they would if you found them on a hardware synth. Rotary control operation is therefore less than intuitive on first use. Pinch-to-zoom doesn't function in Arctic Keys, which is a shame because it would help with reading the legending. 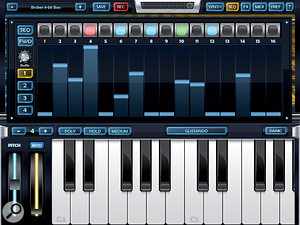 As well as a traditional analogue-style synth, Arctic Keys has a pattern sequencer built in: ideal for rhythmic automation of various parameters.The keyboard itself has a traditional piano layout and cannot be changed to preset scales or keys, and although velocity response is achieved by touching the keys in different places (the lower the contact, the louder the note), you can't achieve a varying response as you slide along the key. Both of these features are available in some competing apps, such as Moog Animoog and ThumbJam.

The sounds that Arctic Keys produces are, as you might expect, well within the parameters laid out by previous analogue-style subtractive synthesizers and their iOS emulations. You will need to work hard on your own sounds if you want to match the richness and depth of some of the presets. But then building sounds and performances by piecing them together from basic principles is, for many, the attraction of synthesis. These will be the same people who might be frustrated by the approach taken in Moog's Animoog app, which makes it very difficult to strip away the many layers to create a basic, functional sound.

A variety of sharing options are available. MIDI sequences (captured with the live phrase recorder) can be emailed or bounced to audio, while audio recordings captured in the same way can be copied and pasted using Sonoma's AudioCopy protocol, and when copied will also be available to apps that support Intua Audio Sharing. They can also be uploaded direct to SoundCloud, if you so desire. These features are available from Arctic Keys' file browser, but it's worth pointing out that audio captured when recording with the live phrase recorder is automatically placed on the AudioCopy (and Intua) clipboard, so it is a quick and easy task to paste it into a supporting app.

Here might be a good place to point out that while GarageBand (the sequencer of choice for many iOS users) does not overtly support AudioCopy, audio can, in fact, be pasted into GarageBand from the AudioCopy clipboard.

MIDI control is particularly well implemented, and Arctic Keys keys will create virtual MIDI ports using CoreMIDI. Arctic Keys also supports Korg's WIST protocol, allowing the user to sync multiple iPads running supporting apps. One specific plus for Arctic Keys is the ability to push the filter into uncontrollable feedback: This is not necessarily a 'nice' sound, but it's good to know the filter range isn't limited.

Overall, then, it's hardly a "new standard”, but Arctic Keys is a well-implemented recreation of a traditional approach to subtractive synthesis. It has lots of scope for editing, performance and sharing to other apps, and should find many fans amongst those looking to utilise this approach for a good price. Mike Watkinson 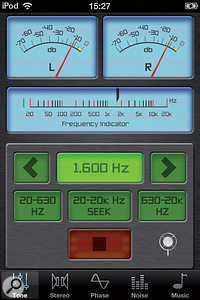 TigApp are a Czech company who currently list just two iOS apps on their web site, of which Audio Audit is designed for the basic testing of loudspeakers and headphones using an iPhone or iPod Touch.

The app has a clear and simple graphical layout comprising a pair of moving-needle meters (spanning a 70dB range with both peak and RMS needles) at the top of the display on all five of the available function screens. The function screens are selected by touch buttons along the bottom of the iPhone screen. The five screens comprise a sine-tone generator, a stereo imaging tester, phase check, noise generator, and some test music excerpts.

Immediately below the two meters, a second display panel changes to reflect the function of each test screen. For example, the tone generator page has a frequency scale indicating the pitch of the current test signal, while the stereo imaging screen has a left-to-right position scale and a moving yellow blob to indicate the intended location of the stereo test signal. 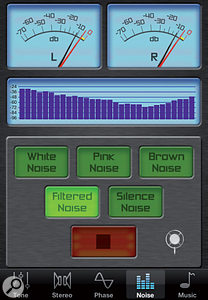 Five noise types are offered by Audio Audit, for various testing purposes.The phase check screen has a correlation meter, the noise generator screen has a spectrum analyser to indicate the tonality of the selected noise, and the music excerpt screen has a stereo waveform display. The lower half of each screen contains between five and eight buttons, used to configure the required test signals and to access the acoustic measurement meters.

Audio Audit is intended to be hooked up to a loudspeaker monitoring system (or a pair of headphones) using the iPhone's dock or mini-jack outputs, and then used as a convenient test-signal generator. All audio test signals are uncompressed, 16-bit, 44.1kHz files, most with an RMS level of -15dBFS. Specific test-tone frequencies can be generated from 20Hz to 20kHz, as can three preset sweep ranges, or broadband noise can be used with white (flat spectrum), pink (3dB/octave slope), brown (6dB/octave slope) and quasi-Fletcher-Munson-shaped noise spectra.

The phase check provides vocal and music examples which can be switched between normal and out-of-phase modes, while the stereo test provides bass and snare-drum tracks, which are panned to identify each channel and automatically cycle between left and right extremes. There are also six preset music excerpts covering a range of styles, including spoken word, pop, rock and classical.

These test signals can be used to check signal wiring and basic system functionality, assist in the evaluation of system bandwidth and response characteristics, correct stereo channel allocation and polarity, and so on. However, to make the app even more useful, the iPhone's microphone can be used to provide a basic measurement function via a separate screen, which overlays the test generator screens. When activated, a second set of moving coil meters is displayed along with two dual-vertical bargraph meters, to display simultaneous peak and RMS readings of the captured microphone signal.

The documentation supporting the Audio Audit app has suffered from some Czech to English translation problems, and most of the technical specifications aren't as helpful as they might appear. In particular, there is no indication of how the microphone meter readings relate to real world SPLs, although I would estimate that -20dB on the RMS meters equates to about 80dB SPL. Of course, the level and frequency-response accuracy of these displays is heavily dependent on the iPhone hardware, and while it seemed reasonable with an iPhone 4, I'd caution against relying on such a system for any critical level measurements.

Overall, the Audio Audit app does what it says, and could be a useful facility to have on your phone. There are, however, some limitations that make it a little frustrating: for example, it would have been nice if the user could load their own reference music tracks. More critically, there really should be a display-invert mode so that the test and measurement screens can be viewed the right way up when an iPhone mic plugged into the base of the phone is pointed upwards or towards the test speakers! Scaling the metering with rough SPL figures, instead of a reference-free -70 to 0dB scale, would also be a lot more helpful. I'd award the app seven out of 10: a good try, but with room for improvement in updates! Hugh Robjohns