Audiobus allows you to pass the audio output from one app to the input of another in real time by creating an inter‑app 'audio cable'. For those of us who have persevered with AudioCopy (and AudioPaste) and the iOS clipboard to shuffle audio between different apps, this might just be the godsend we've been waiting for! 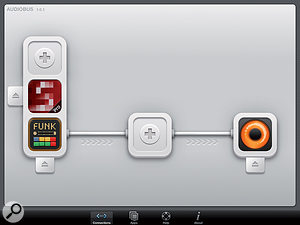 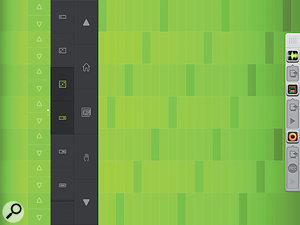 Soundprism Pro with the Audiobus connection panel visible on the right-hand side. 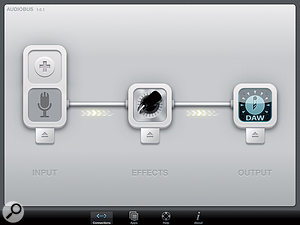 Guitar recording into Multitrack DAW with effects from JamUp Pro.Trailed in Apple Notes back in July 2012, Audiobus has undergone extensive beta testing and is now available on the App Store. The catch is that apps must be Audiobus compatible, which explains the long gestation period, as those apps have to undergo testing at the same time! The list is much more extensive now than it was back in July, with some significant additions. See https://audiob.us/apps for the current list, which is growing daily.

Once I had a selection of compatible apps installed, I decided to test Audiobus with two typical scenarios. The first was recording synthesizer apps. For this test, I used Funkbox and Soundprism Pro as the input apps (sound sources) and Loopy HD as the output (recording device) as shown in the example screen.

Setting up was very straightforward: the input and output apps can be launched from Audiobus itself, and there's a connection panel that allows you to switch between apps quickly. You can also activate recording to the output app without leaving the input app, and stop and start playback of the input app (if it has a sequencer or is a drum machine) without leaving the output app. The interface has been thoughtfully designed to make this a straightforward process. Recording worked without a hitch and I was very quickly able to create a multi-layer piece using Loopy HD, and even synchronise the two apps using MIDI clock via Core MIDI, to record perfect two-bar loops from FunkBox.

For my second test, I made a multitrack guitar recording with effects. I connected a guitar to the iPad using an Apogee Jam interface, and then selected 'Microphone Input' as the input in Audiobus. This automatically selected the Jam, although it was connected to the dock connector. I then added JamUp Pro to the middle 'Effects' position in Audiobus, and, finally, selected Multitrack DAW as the recording device in the output position. With this setup, I was able to record guitar with effects from JamUp Pro straight into the Multitrack DAW app, again without any hitch.

The future widespread adoption of Audiobus is entirely dependent on other developers adding Audiobus support to their apps. The only competition to Audiobus at present is Sonoma Wireworks' AudioCopy/Paste protocol, although this works in a very different way. AudioCopy has proliferated and works with GarageBand (probably the most popular iOS DAW) and allows users to create music by 'collecting' contributions in various apps and pasting them into a project in GarageBand. Much as I love Loopy and respect the austere minimalism of Multitrack DAW, compatibility with an app like GarageBand is imperative if Audiobus is not to become marginalised. Two important players, WaveMachine Labs (who develop Auria, the most complete DAW for audio recording for iOS at the moment) and Moog Music are working on Audiobus compatibility as I write, and the SDK will be released to the public in the near future, all of which bodes well for the future.

In conclusion, Audiobus is not cheap for what is essentially a cable (although it could hardly be called expensive in a studio context), but it might well be the missing link for those wishing to seamlessly link audio apps on their iOS devices.