Do your mixes translate well to radio or consumer audio systems? If not, the Mixcubes might be just what you need...

To appreciate why this Avantone speaker was developed, you need to understand the thinking behind the original Auratone 5C Sound Cube that has served in so many major studios as a secondary reference speaker over the past quarter century or so. The passive Auratone featured a single five-inch driver, which gave it a slightly middle-heavy quality that turned out to be ideal for checking how mixes would play on the radio and on the consumer audio equipment of that era. 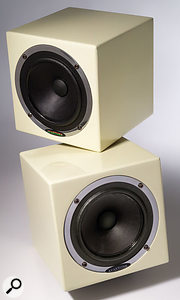 Auratone speakers are no longer made, but after thoroughly researching what made the originals perform as they did, Avant Electronics decided to bring the concept up to date. During that time they discovered that there were several versions of the Auratone driver, with widely varying frequency responses, so they picked the most linear and set about emulating that, throwing in a few improvements along
the way.

The original Auratone 5Cs were built from half-inch chipboard, finished with a fake wood veneer. The Avantone Mixcubes use MDF, as it is more dense and thus better suited to acoustic applications. Avant also increased the thickness to further reduce box resonances, so the finished monitors weigh a little over 7lbs each and are slightly larger than the original. The final cabinet design is a 165mm (6.5-inch) sealed cube with radiused edges and a cream-coloured, high-gloss polyurethane finish. Nickel-plated metal binding posts, designed to accept banana plugs or bare wires, replace the lightweight plastic originals, and are mounted on a black anodised aluminium plate at the rear of the cabinet. In line with new safety regulations, these posts are fitted with clear plastic shrouds to prevent accidental contact with the terminals. A neoprene pad, just over a quarter of an inch thick, is recessed into the bottom of the box to provide a degree of acoustic isolation, and to stop the speaker sliding around. There's also a 5/8-inch mic-stand thread set into the base, which wasn't present on the original.

Auratones used a five-inch driver with a stamped steel chassis, whereas the Avantones use a slightly larger 8Ω 5.25-inch driver with a die-cast aluminum chassis. A polished mounting bezel also improves on the utilitarian appearance of the originals, though the paper cone has been retained, apparently made using New Zealand pulp with added mica fibres to increase the strength.

The original Auratones used a soft roll-rubber surround, whereas these drivers use a Japanese-made cloth surround. The top plate and T-yoke of the magnetic motor are made of Sumitomo 1008 low-carbon steel, to maximise flux density in the coil gap. Specialist magnets are also used to maximise power while keeping distortion low, and the driver is magnetically shielded for use close to CRT monitors or other sensitive equipment. 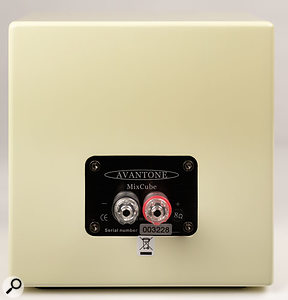 Like the originals, these speakers can play louder than their size suggests, and they really need an amplifier rated in excess of 50W-per-channel to do them justice. I tested them using a 100W-per-channel AVI integrated hi-fi amplifier. However, the quoted frequency response of 90Hz to 17kHz actually means very little without specifying how many dB down the response is at these points.

Before evaluating these speakers, you have to keep in mind that they were created specifically as a 'real world' secondary reference rather than a compact alternative to full-range studio monitors. Like the Auratones, they tend to make the vocals sound a little on the forward side, but they are good at checking which bass sounds work on a band-limited consumer system, as any deep bass is outside their range. The top end also rolls off slightly, due to the
lack of a dedicated tweeter, but the overall integrity of the sound is good because there's no crossover to introduce phase errors or distortion.

Though a five-inch monitor is never going to be deafeningly loud, the Avantones play more than loudly enough for comfort and don't start to sound unduly boxy until you push them hard. This design is intended to be better than the original: the mid range is less coloured and smoother, with a better-defined high end, but the general character is much as I remember from my old (long-since departed) Auratones. As a means of evaluating a mix holistically to
see if everything fits together, they work really well. The new cosmetics look great too, and the non-slip base is a practical and welcome bonus.

What you must keep in mind is that speakers like this aren't intended to be used as your only monitors. Rather, they provide a second opinion, a bit like the boom boxes some studios wire into their monitoring systems. They'll tell you if your mix will sound OK on a the radio or TV, or in the car, but they'll offer few clues as to how your dance track might sound played over a club PA system! If you use them as intended, they won't disappoint.

The original Auratones are the obvious point of comparison. However, these are no longer in production, so the only way to get hold of them is on the second-hand market. For the nearest comparable alternative that is currently in production, you could look at Klein + Hummel's M52 speakers, which are active (and there's also the M52D, which offers a digital output).

A neat update of an existing concept. Perfect for checking whether your mixes are radio friendly.