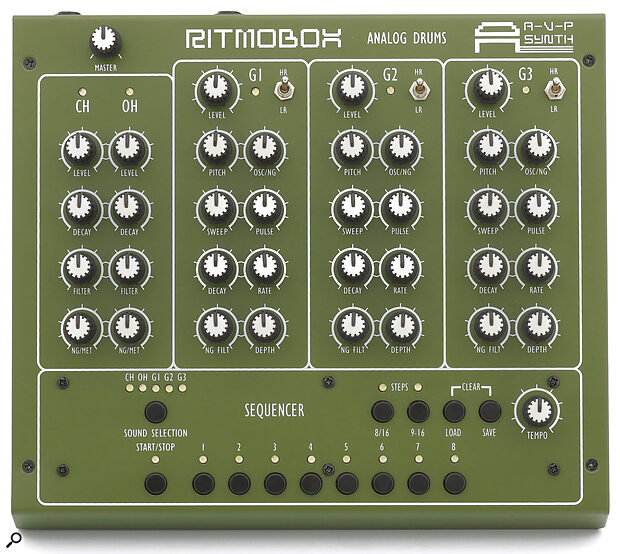 The Ritmobox is a no‑nonsense drum machine with a solid analogue sound.

Back in the July 2020 issue of SOS, I reviewed the AVP Synth ADS‑7 MkII, a no‑nonsense Russian analogue drum machine which won me over with its raw sounds and old‑school approach. The Ritmobox is a slimmer version of the ADS‑7 MkII. A few nips and tucks have been made, but the basic premise remains the same — rough and rugged analogue drums, a simple but effective sequencer, individual outputs and rock‑solid build quality.

The Ritmobox’s front panel layout is simple. There is one knob per function, plus a series of buttons for programming the sequencer. There are five voices comprising three flexible ‘generators’ plus open and closed hi‑hats. Round the back are MIDI In and Out on five‑pin DIN connectors, 12V AC power supply socket, (mono) mix and headphone outputs on quarter‑inch sockets, and five individual 3.5mm audio outputs.

Fire Up The Generator

The main synthesis voice available is the Generator. There are three to play with and each has nine parameters plus a level control. The circuit has two parts, an oscillator and a noise generator, which can be mixed together. The oscillator is a fixed waveform which is somewhere between a sawtooth and a triangle. It can be tuned from sub‑sonic frequencies through to around 650Hz and you can sweep the pitch of the oscillator for classic kick drum pitch drops. For extra tonal variation, there is also basic FM, with a second lower‑frequency oscillator acting as the modulator. Most of the range of this second oscillator is low frequency, so lots of wibbles and wobbles emerge, but it does go up into audio frequencies, which makes for some nice FM kicks, lasers and techno percussion. 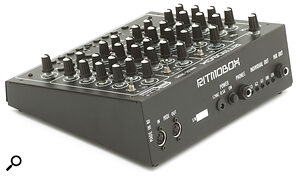 Currently available in black or a militaristic green, the Ritmobox’s back panel features MIDI I/O ports, headphone and audio outs on quarter‑inch jacks, and individual audio outputs on 3.5mm sockets.The noise section offers a white noise generator through a bandpass filter. The filter frequency is adjustable, allowing frequency ranges that will cover snares, claps and hi‑hats. It doesn’t go low enough for any cinematic explosions or deep rumbles, which seems a shame, but as a layering element, with low frequencies provided by the oscillator, there is plenty of scope.

For extra transients on kick drums and percussion, a short pulse can be mixed in with the oscillator and noise elements. This helps greatly with adding extra punch to the attack of any sound and can even be used by itself by tuning the oscillator so low that it’s no longer audible.

In order to help with tonal shaping of the final sound there is a filter, but it only has two settings. Effectively this is a tone control with high and low settings. The low setting can be used to roll off some of the high‑end frequencies caused by the oscillator, FM and noise. It feels of limited use, and although I would rather have it than not, I feel like a sweepable low‑pass filter on the synth section would have helped a lot.

Overall, the Generators are very flexible analogue drum circuits. They have a ‘synthy’ sound to them, which I attribute to the sawtooth‑like oscillator waveform. Without a proper filter, you can’t remove enough harmonics for smooth 808‑style room‑shakers because the oscillator always has those sawtooth harmonics poking through. However, they do pack a lot of raw analogue punch and are capable of producing everything from kick drums, snares, noise blasts, hi‑hats, cymbals, laser sweeps and analogue effects. And whilst they aren’t quite as flexible as the ADS‑7 MkII’s Generators, which have 12 parameters compared to nine here, the FM capability is something that the ADS‑7 MkII didn’t have and so adds something a little unique.

The remaining two voices are dedicated to open and closed hi‑hats. They are identical except that the open circuit has a longer decay range. As far as I can tell, these are the same circuits used by the ADS‑7 MkII. Like the Generators, there is a tonal and noise element that can be mixed. The tonal element is fixed pitch and sounds a little like a metallic CR‑78 hi‑hat. The noise element is a soft pure noise with band‑pass filtering, allowing you to go from chunky to anaemic.

Interestingly, the closed hat does not choke the open hat. This was a switchable option on the ADS‑7 MkII, but it seems that the designers at AVP Synth decided to leave that off the Ritmobox and remove choking altogether. I’m not sure how I feel about that decision, but I suppose plenty of ’70s analogue drum machines did fine without it.

The eight step keys, as well as providing X0X‑style pattern programming, can also be used to trigger the five voices or mute instruments whilst your pattern plays back. There are 16 save slots for sequences and these can be loaded, edited and saved all whilst the sequencer is playing. Whilst 16 sequences might be enough for a song or two, you’re unlikely to be doing an entire gig with it unless you’re improvising a lot. With a bit of practice you can program, edit and perform live, and although the sequencer only provides triggers, there is much fun to be had programming and tweaking sounds live. This is about as simple as a drum machine sequencer can get — no velocity, no parameter automation, no track lengths or even pattern length beyond eight or 16. And, unlike the ADS‑7 MkII, there appears to be no way to back up sequences via SysEx.

If this seems too simplistic, the Ritmobox can be sequenced externally. MIDI input allows for triggering the five voices. Just like the internal sequencer, however, there is no velocity or parameter automation. But at least you’ll be able to sequence patterns longer than 16 steps. The sequencer will also automatically sync to MIDI clock if detected at the MIDI input. If you want CV trigger inputs, you’ll need to upgrade to the ADS‑7 MkII.

I like the Ritmobox a lot. The raw sound, the individual outputs, the one‑knob‑per‑function and the feeling that you’ve bought an instrument that will still be working in 30 years are all worth the asking price.

The Ritmobox could easily be dismissed for its simplicity. In fact, it is difficult not to focus on the lack of velocity support, or accent, or any kind of parameter automation beyond grabbing a knob and turning it. But there is a robust, solid presence to the sounds that is difficult to recreate on a drum machine with a more modern design. The individual outputs also means there’s a lot of scope for blending the sounds afterwards. Pair the Ritmobox with some good effects, maybe a distortion pedal, an analogue delay, or a side‑chain compressor and I guarantee you a sound you won’t find easily in‑the‑box.

At the same time, the scaled down nature of the Ritmobox, when compared with the ADS‑7 MkII, leaves us with fewer options. I miss the dedicated kick drum channel of the ADS‑7 MkII. The clap was killer too. And the sequencer, which was not complex to start with, now seems so simplistic that I wonder if it was worth including at all.

If you already have a good complement of drum machines in your arsenal, I think the Ritmobox will fit right in. As a second or third machine, it will add a chunky analogue percussion flavour to any song, but it doesn’t feel like it can stand on its own like the ADS‑7 MkII does. There isn’t enough in the way of voices, variety or sequencing options for it to play a main role.If this makes me sound like I don’t like it, banish that thought. I like the Ritmobox a lot. The raw sound, the individual outputs, the one‑knob‑per‑function and the feeling that you’ve bought an instrument that will still be working in 30 years are all worth the asking price.

The Ritmobox retains a lot of the rugged, no‑nonsense, analogue charm of its bigger brother, the ADS‑7 MkII. It is unashamedly inspired by ’70s drum machines so don’t expect complex sequencing or deep MIDI integration. However, if you have a penchant for solid, synth‑style, analogue percussion, it will certainly deliver.