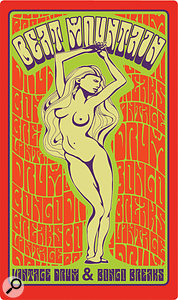 Way before samplers became affordable, DJs were using the backspin technique to repeatedly cue up drum breaks in the creation of new pieces of music. Records dating from the late 1960s and early 1970s proved to be rich pickings for those looking for source material, partly because at that time funky breaks were fashionable compositional features, but in recent years copyright enforcement and litigation have pretty much put a stop to vinyl sampling.

And so we have Vintage Drum & Bongo Breaks, which provides 548 royalty–free breakbeats, recorded to sound as if they are the solo drum mixes from old records. That said, the producers haven’t added vinyl crackle or tried to simulate the affect of stylus wear, and most of the breaks are more dynamic than they would be if subjected to vintage mix bouncing, bus compression and mastering, so the user still has some work to do if they want something that sounds truly sampled.

The library has just four folders, which are named ‘Drum and Bongo Dry’, ‘Drum and Bongoverb’, ‘Drums Dry’ and ‘Drumverb’. As their titles suggest, drums with bongo arrangements are separate from drum-only examples, and there are both dry and wet versions of everything. The disadvantage of having so few folders is that there is a massive list of samples in each one, so finding something specific takes a while. Some library developers name their files creatively so that they are easy to identify, but in this case the only descriptive data that’s included in each filename is its bpm! On the positive side, almost every bpm increment between 75 and 156 is represented, plus quite a lot that are somewhere between whole numbers, which is quite strange!

According to its promo notes, Vintage Drum & Bongo Breaks took five years to complete. It certainly sounds as if the kits were recorded in many different ways and in many different spaces, possibly using a variety of mic setups and recording equipment. Sometimes the drums are upfront and very clear, but mostly the balance of close and room mics is set so that the kits appear to be sat back in the room a little. It’s obvious that a lot of time has been spent trying to recreate certain balances and tunings, and it’s only really the hi–hat that sometimes feels a bit flat.

The reverbs that have been applied to the wet versions seem to differ from one file to the next. For example, some of the samples sound like they’ve been processed by the spring on a guitar amp, while others have more of a ’60s echo-chamber character. They’re certainly worth checking out before running the dry version through a plug–in.

In summary, Vintage Drum & Bongo Breaks is an inconsistent collection of drum riffs, covering a wide range of bpms and a huge variety of production styles. It’s almost like a load of breaks sampled from a big record collection!