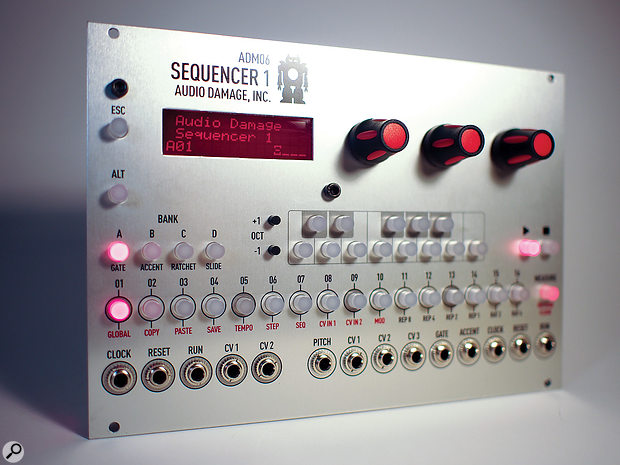 Audio Damage may be familiar to you as makers of some proudly idiosyncratic plug-ins, but they also manufacture a range of Eurorack modular-synth goodies. Sequencer 1 is their first foray into the non-effects side of modular, and it’s more than a gingerly dipped toe: featuring 64 patterns of up to 64 steps, three LFOs and microSD card storage, it’s a seriously powerful package.

Upon unpacking the Sequencer 1, the first thing that struck me was how gorgeous it looks. Audio Damage always pay a lot of care to their software GUI design and this has carried over to their hardware. The layout is simple and clean and everything is optimally placed for maximum tweakability. At the bottom are the unit’s ins and outs; to the left there are clock, reset, run, CV1 and CV2 inputs; on the right are pitch, CV1, CV2, CV3, gate, accent, clock, reset and run outputs.

Above the jacks are 16 round step buttons, X0X-style, each lighting up if a note is present. These buttons are clearly labelled above, with their step number and alternate functions listed below. Above the steps are four bank buttons and then a mini keyboard laid out with the same buttons, including octave modifiers. On the right of this are the play and stop buttons. Finally, at the top is a large red LED display, Esc and Alt keys, and three endless encoder knobs. All the buttons and knobs respond perfectly and feel reassuringly sturdy — there’s no wobbliness here!

Initial sequencing is child’s play. Set a pattern running in edit mode, hit the note steps you want a note to be on and select the pitch by holding a mini-keyboard note at the same time. But the fun really starts when you realise that every step has three CVs available besides pitch, and an accent gate output as well as normal gate. I quickly had the sequencer sending out a melody over CV/gate and CV1 patched to cutoff frequency, CV2 to resonance and CV3 to LFO frequency. The complexity multiplies when you start patching the three on-board LFOs to the CV outs instead of linear keyboard values. For example, how about patching an LFO with some amplitude randomisation into the CV1 input, which is then sent to ratchetting? And then varying the pitch randomly too, via another LFO? The result is a sequence with random note repeats that will never become repetitive because it will never exactly repeat. Oh, and if you’re worried about the musicality of all this, well, that’s up to you: the Sequencer 1 also features scales which means you can conform your crazed burblings to one of 40 preset scales or eight of your own.

The Sequencer 1 is both deep and immediate: if you’re looking for a sequencer that can knock up a quick bass line and transpose it around easily, this is the sequencer for you; if you’re looking for a box of mad elves that will take your initial ideas and mutate them beyond anything you could have thought of, this is also the box for you. Above everything, the Sequencer 1 is perfect for live modular improvisation, and I expect to see many of the wee beasties as future YouTube stars.