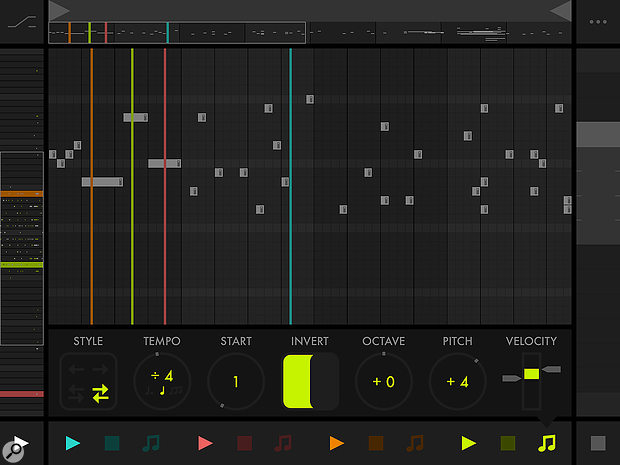 The Fugue Machine piano roll, with its four colour-coded playheads.

Alexandernaut’s Fugue Machine arose from its creator’s interest in the music of JS Bach, scarily prolific Baroque composer whose preludes and fugues have haunted many a childhood piano lesson. Fortunately, the app is easier to learn than the Well-tempered Clavier and it should be only a few minutes before you’re turning out complex-sounding musical material from relatively simple input.

Fugue Machine is a multi-phasic sequencer, which means that a number of playheads (up to four) are each capable of independent motion across the same musical landscape. Notes are painted onto a typical piano roll and, using various gestures, can be moved around or lengthened, their velocities adjusted or selections copied and pasted. The scrolling and navigating works intuitively and you can squish the view to display more notes or modify the loop length, say to work on a smaller section. Looping patterns of up to eight bars serve as Fugue Machine’s input. Each playhead can begin from any step and then progress forwards, backwards or in a choice of two pendulum motions. While painting in notes and chords worked fine, I soon found myself wishing for MIDI note input as a more intuitive means of putting conventional melodies through the mill.

To become acquainted with Fugue Machine, I chose an empty one-bar pattern and made a rising arpeggio before setting the first playhead (blue) to run forwards through it. Turning to the second (salmon-coloured) I had it start at step five, run at half tempo and transpose each note by four semitones. I repeated this exercise for the next two playheads, choosing double speed triplets for one and backwards, two octaves down and half speed for the other. With speeds ranging between 1/64 and a manic 8x, there’s plenty of scope for variation. Each head can compress or flip the velocity of the notes played and the invert button flips their values harmonically, the highest note becoming the lowest and so on. The column on the right hand side acts as a handy live transpose. 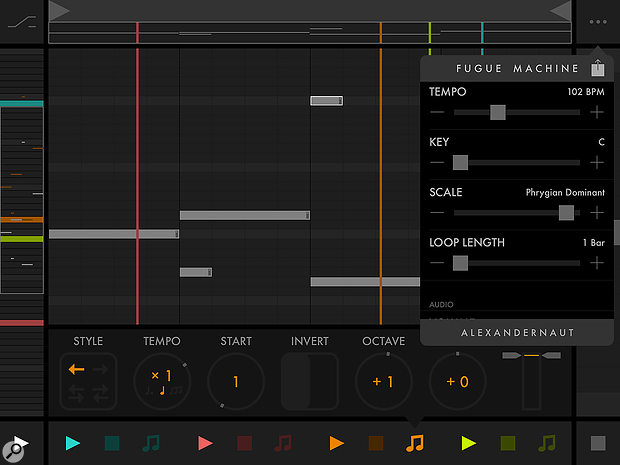 Your notes can be reassigned to any of the 11 scales.

My looping arpeggio was rapidly heading for the ‘challenging’ category (thanks partly to those daft triplets) and it quickly became obvious that some kind of organisation — dare I say composition — was going to be needed to really enjoy this app. Scale correction provides a useful compositional aid: a simple harmonic shift and a new scale can make even the most pedestrian phrase seem more musically accomplished. There are no user scales so you’re limited to the 11 hard-coded into the app, but in no time at all, my one bar of nonsense was sounding like it belonged on BBC Radio 3. Having created something interesting, there are 128 slots into which patterns can be stored. You can save or switch to a new pattern during playback, but doing so is a menu operation not particularly suited to performance.

The app’s lone internal sound is a percussive pluck somewhere between a harp and an organ. It’s OK for working on patterns and has a sympathetic reverb, but the real fun starts when you route its MIDI output to either another iOS-based soft synth or to an external source. The data is generated on a single MIDI channel and though multiple playheads can hit the same step simultaneously, they don’t trigger multiple notes. This limitation helps those synths that don’t cope well with multiple note-ons, but perhaps it would be better as an option.

To sum up, Fugue Machine is a pleasant app to while away the hours making hypnotic, often fascinating loops. It lacks any form of pattern chaining or song arrangement, so is at its best when being creatively tweaked. Unsurprisingly it’s not instant Bach, Nyman or Glass, but can be a fugueing good way to spend a wet Sunday afternoon.