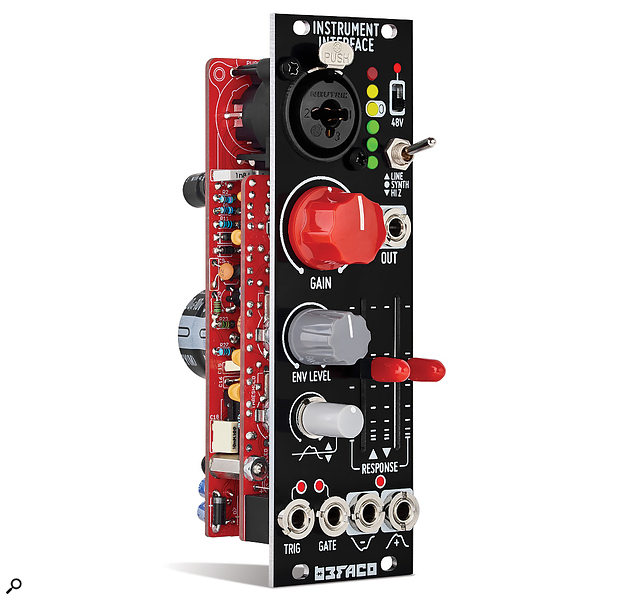 Dealing with the mini-jack connectors and remarkably hot audio signals of the Eurorack format can feel a bit frustrating when you're trying to work in a sound from outside your rack. The Befaco Instrument Interface is a one-stop solution for bringing your voice, guitar or line-level audio source into your modular system. It uses proper audio connections, integrates perfectly with your modular and is completely frustration-free.

The input is handled by a Neutrik Combo connector. It can automatically detect if you've plugged in a microphone with an XLR cable, and can support dynamic or capacitor mics, with a switch to pump in 48V phantom power. If you are using a different source then there's an impedance switch to select between Line, Synth or Guitar level. A six-segment LED meter helps you keep the input level under control with a turn of the nice big and red Gain knob.

The output emerges from a mini-jack socket at the correct level for Eurorack, and you can patch it through your effects, sample it, or use it in whatever way you choose.

The bottom half of the module has a whole other thing going on. While the audio is going through it, it can extract a gate or trigger, and it has an envelope follower circuit to generate control voltages shaped by the strength of the input signal. You have control over the trigger threshold level and the envelope level. Attack and Decay sliders let you shape the response, and you have positive and inverted outputs.

The beauty of the Instrument Interface is that I now have a simple way of bringing my guitar and voice into my rack with no setup or messing about with mixers and cable adaptors.

I found the envelope follower very useful on vocals in a live situation, where it would open and close the recording gate on my Strymon Magneto so that only the voice was being captured and not the gaps in between. Another function that worked really well was taking a track out from a drum machine and bringing that pattern into my rack as a trigger for a sequence or alternative drum sound. When playing guitar I could use the triggers as a clock to control the tempo of a delay module, with sometimes hilarious results. But the point of the envelope follower is that you're extracting useful voltages from your incoming signal that you can use in whatever way you like.

The Instrument Interface is available either assembled or as a kit. The kit version is quite challenging, due to the PCBs having a lot of components in a small space and on both sides, but if you have a soldering iron and a spare afternoon then it offers great value.

The beauty of the Instrument Interface is that I now have a simple way of bringing my guitar and voice into my rack with no setup or messing about with mixers and cable adaptors. Or if I just want to route in the output of another synth for processing, it's excellent. Simple, functional, useful and it has more features than you thought.