The Arabic Oud is a close relative of the lute, sharing the same kind of half-egg-shaped body and short fingerboard. While the lute became widely used in European music during the Renaissance period, the oud proved better suited to the musical styles of the Middle East, partly due to the benefits of its fretless fingerboard. 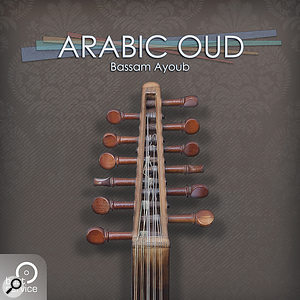 For this virtual oud, musician Bassam Ayoub recorded and produced his own performances at his studio in Weisbaden, Germany. The finished library comprises 39 articulations with up to eight round–robin variations each. To provide some tonal options, three different ouds were recorded and these appear as separate instrument options within the engine.

When any of the three ouds is loaded, the Engine's virtual keyboard is divided into coloured sections that are spread across eight octaves. At the bottom end, there are keyswitches for selecting articulations such as tremolos, vibratos, legatos, strums, harmonics, slides, mutes, sustains, trills and glissandos. It would take a special mind to remember which of the 39 articulations is triggered by a particular key, so users will probably need to have the Quick Edit page in view all the time, which shows a colour-coded articulation list alongside a fetching image of an oud's tuning head. Here, whenever a keyswitch is pressed, the corresponding articulation is highlighted in the list.

Towards the top end of the keyboard is a patch of eight green keys, each of which triggers a lengthy but impressive MIDI performance when held down. The user is able to affect these performances by holding different keyswitches, although it's difficult to predict what the sequence is going to do and therefore apply a suitable articulation at the right moment.

Alternatively, a performance can be created entirely from scratch by playing the white keys in the three-and-a-half octaves that sit between the keyswitches and the MIDI keys. By default, these keys are given a sustain articulation, but others can be applied at any point by pressing the relevant key.

...if you are after the kind of sound that instantly suggests 'Middle East' to Western ears, this is it.

Micro-tuning is achieved by selecting a preference from a menu of Arabic maqams comprising Bayati, Rast, Saba and Seka, with each tuning available as either a normal or Syriac church variation.

Further controls are provided for altering a note's attack, release, dynamic curve, noise volume, expression and pan position, plus there's a general volume level knob and a reverb level with its own bypass switch. Reverb aside, Arabic Oud has no effects processors, although further sound editing can be done by using the Engine 2's Pro Edit facilities.

In terms of tone, the three ouds sit somewhere between classical guitar and zither, although they're not radically different from one another. The quality of the sampling is high, but tailoring a performance to fit a pre-existing composition will require some mastery of the library's many keyswitches. Nevertheless, if you are after the kind of sound that instantly suggests 'Middle East' to Western ears, this is it.