My first Ethno World 5 observation was "blimey, an actual manual!”. Having a pile of virtual instruments squatting in my Mac and not one printed manual amongst them, this one, with its full‑colour photos of weird and wonderful instruments, is a refreshing change. 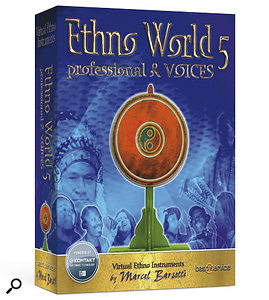 A pretty manual is nice to have, but I mention it mostly to illustrate the attention to detail that exists throughout. Marcel Barsotti's Ethno World 5 contains around 20GB of samples encompassing bowed and string instruments, woodwind, brass and bells, drums, gongs, percussion, and voices and choirs from across the globe. Its scope is wider than the Mississippi and, with more than 18,000 samples from over 240 instruments, you can reasonably expect years of global plundering, especially since all the instruments from the previous EW4 (reviewed January 09) are included too.

After a straightforward Kontakt 4 installation (a Kontakt 4 player is bundled in for those who don't have the full version), your world tour can commence. The previous review offered a detailed breakdown of many of the instruments, so here we'll focus mainly on the newcomers.

Amongst the woodwinds are two new flutes, each with contrasting tones. Both are supplied with a generous selection of articulations and licks: authentic recordings beyond the scope of keyboard replication. The Ney Flute is a breathy Iranian flute whose Kontakt articulations include percussive bursts and fluid trills, while the Pivana Flute is a pure‑sounding sheep- or goat‑horn flute from Corsica. This mellow instrument comes in regular and tenor versions (depending, presumably, on the size of the donor sheep or goat), and the licks that supplement its base samples are evocative and occasionally haunting.

The already extensive percussion section is joined by the powerful Japanese Taiko drums. These highly playable drums are complemented by an array of loops, and even a few sampled yells! The Big Ethnic Toms include a series of hits, rolls, and hundreds of versatile loops that could slot into many musical styles. Similarly, there's an assortment of crash, splash, ride and china cymbals with swells, assorted hits, and loops that aren't explicitly ethnic in nature, but are welcome all the same.

Back to more traditional world instrumentation, personally I never tire of quality gong samples, and the new Big Feng Gong is superb. I've already used it in several finished tracks. Ditto the small but immaculate set of wind chimes.

The Voices element of the package has been boosted by 25 new solo voices, plus an ethnic chamber choir. The voice component still lags a little behind in its global coverage but features some really useable material all the same. Although not totally ethnic, I really enjoyed the human whistling, the crowd version being spookily good.

The other instrument groups didn't receive too much attention this time out, although the Bandura — a stringed instrument from the Ukraine — deserves a mention. It's a lovely, if uncomplicated, thing, like a cross between a zither and a lute.

Taken as a collection, Ethno World 5 is impressive and expansive, with the samples from previous versions sounding as fresh as ever. As noted in the review of EW4, some instrument groups are more complete than others, and some are far more generous in terms of articulations, loops and licks. Ultimately, this is a fairly expensive library but one that is classy enough to justify itself to discerning composers of world or new age music, or anyone in search of deluxe exotica. Paul Nagle