This hefty collection of ambient and chilled loops, hits and samples weighs in at just under 6GB, with all the usual formats covered (WAV, REX, Kontakt, Apple Loops, RMX) over three DVDs. 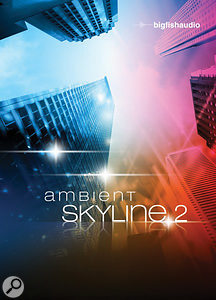 Content is roughly split into two groups: loops and one-shots. In the loops section, everything falls into nine main categories: Drums, Electric Bass, Guitar Arpeggios, Guitar Loops, Pads, Pedal Steel, Percussion, Rhodes and Tonal Percussion loops. All the loops are at either 60 or 65 bpm, which is perhaps a little on the slow side for some, but there are the REX files to play with if you feel the need for more speed.

The drum loops are split pretty evenly between live sounding and programmed, with some left dry and others treated with a fairly good dollop of delay and reverb, as well as lots of panning and stereo processing. There is quite a heavy dub influence in many of the beats, which works well, although many might be slightly meatier sounding than the ambient tag would suggest. The Percussion loops also work well and are very atmospheric; they focus on hand percussion, are laced heavily with reverb and would drop easily into most soundtrack material.

Other highlights include the delayed Rhodes licks (although the use of reverse delay gets a touch annoying in places) and the Tonal percussion loops, which use processed gongs, bells and other metallics to great effect. As you would expect, the Pad loops are also good: varied and atmospheric, with plenty of movement and panning.

I wasn't so keen on the Guitar Arpeggios, which sound a little too like chorus-heavy '80s soft rock for my taste, although the heavily processed (reverb, delay and reversed delay) guitar loops fare much better. In a similar vein, the electric bass loops, although well recorded, clean, and nicely played, seem completely out of place in a collection of this type.

Moving on to the one-shots, there are not many places where you'll find a folder named 'ambient flugelhorn' although I think I approve! This half of the collection contains riffs, licks and runs from a variety of sources. Wind instruments dominate around half of the folders, with ethnic flute, whistles, muted trumpet and bansuri alongside the aforementioned flugelhorn. All of these manage to work well, staying just on the right side of reverb-soaked atmosphere while avoiding cheesiness, although the whistles and flutes do start to become a bit repetitious after a while.

I really liked the female vocal scats and the jazzy piano riffs, while the atmospheres are very good: deep, detailed and chilled. The pedal steel, much as in the loops section, doesn't sound traditionally pedal steel-like, but has a unique, reverberating, shimmering tone with a long attack.

I must also mention the work that has been put into the Kontakt patches, which are gathered on the third DVD. Each patch uses Skyline's own customised user interface that offers direct access to some extra effects (even more reverb, anyone?) and includes all the loops and one-shots. The loops are also available as sliced patches spread across the keyboard, allowing re-ordering and remixing of the loop. The customised GUI uses a neat slider system to give quick access to volume, pitch, pan, attack, decay, cut off and resonance controls for each slice, which is a really nice touch.

So far, so good: my main problem with this library has nothing to do with the playing and programming, which is uniformly decent, but rather with the widely inconsistent nature of the levels between samples. I've nothing against samples being left with headroom to breathe and not being compressed to within an inch of their lives, but some of the content here barely twitches the dB meters above -19dB and lots of it hovers around the -10dB mark. By far the worst offenders are the pad loops — the lowest level I found peaked at -24dB, which is bordering on unusable, and at this price point I expect much more care to be taken in the mastering phase.

Ambient Skyline 2 describes itself as 'ambient and cinematic chill-out'. Although genres often notoriously get blurred, I would definitely say it heavily leans towards the chill-out and downbeat style. Everything is incredibly well organised and labelled with bpm and key info and the playing and programming is good, especially of the wind instruments, synth atmospheres and Kontakt patches. The heavy reverb and delay combo can get a touch overwhelming at times (but that's to be expected in a collection of this type) and the inconsistencies in volume are very frustrating. Having said that, if you're willing to see past the level problems, there's a significant chunk of great-quality, relaxed and chilled-out content to explore here. Oli Bell