Bereich 03 are a small (ie. one-man) German company who first appeared in SOS when I reviewed their Density processor. You can read that review with a little background on the company here. Their second offering, the LC-HC, is ridiculously simple — but I mean that in a good way! It's a high and low cut filter, with a low boost facility. Presented in the same engineering-chic livery and single-width 500-series format as the Density, the HC-LC sports only three knobs and three shiny metal toggle switches, leaving plenty of space for legending and for fingers. 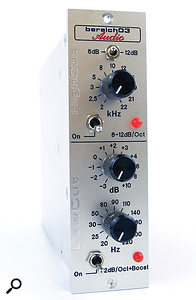 The high-cut filter, which forms the upper of two sections, can be set anywhere from 2-22 kHz, with the top switch allowing you to set the slope to 6 or 12 dB/octave. Another switch enables this filter to be bypassed, and an associated red LED lights when the filter is engaged.

The bottom section, quite logically, caters for the bottom end of the spectrum — but it's more than a simple low-cut filter, as the '12dB/Octave + Boost' legend by the on/bypass switch makes clear. The filter is accompanied by a cut/boost at the turnover frequency which is sweepable from -3 to +10 dB. The idea of adding this sort of boost to a low-cut filter isn't new, and it can easily be achieved with a conventional EQ alongside the filter, but it's extremely useful to have the two linked in this way, because it's just so much more convenient when you want to make adjustments to the frequency.

Both bypasses are hard-wired, so there's nothing to interfere with your precious audio signal when the filters are disengaged. The knobs are standard pots rather than switched resistors. That's often something you'll see criticised in reviews of high-end gear, particularly for mastering applications, but the plus side is that it makes the filters fully sweepable, and that's exactly what you want from a unit like this.

Unlike Bereich 03's Density processor, this is no magic warmth box, but the sound still has that distinct analogue smoothness. It's this, combined with the ease of operation — where processors like this are still streets ahead of any plug-in, in my opinion — that makes this processor what it is: an excellent and useful tool that can grace any (and probably every) recording you make. Considering the small number of controls, it was a pleasure to discover just how much tonal tweakery I could achieve with the LC-HC. The price, at €250 plus VAT, is equally decent — or at least I thought it was, until I realised I wanted at least six of the things and another Lunchbox rack to house them! Matt Houghton