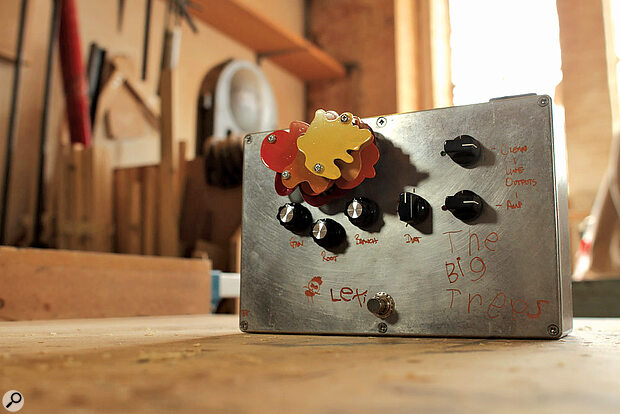 To say that the guitar pedal market is saturated would be a grand understatement: it's hard to fathom how a newcomer could possibly elbow their way to the bar through the throng of metallic paint, 'True Bypass' legends and generic enclosures that look like they were decorated by the designer's children (and probably were). So it's a good thing that Audio Kitchen's The Big Trees is not just another guitar pedal.

In essence, this is a little valve guitar amplifier disguised as a big pedal, but it also has an unbalanced line output that allows you to run it into the front of another amp, or as part of a line-level processing chain. It's a buffered line driver, a clean boost and a drive pedal, as well as an amplifier.

The Big Trees has an understated, handmade appearance, devoid of silk screening or digital displays. It has a proper 240V AC mains socket and, protruding from the top, like space rockets from a hollowed-out volcano, are three valves: not tiny, child-size valves, but an ECC82, an ECC83 and an EL84. They're protected from harm by three tiers of painted metal plates, shaped into the outline of a tree. This is the only nod to decoration in an otherwise austere landscape. There are pots for Gain, Roots — which is bass — and Branches (treble), followed by a six-position switch labelled Dirt. A footswitch toggles between two modes: Clean and Amp. Each has a line output level control and LED indicator. 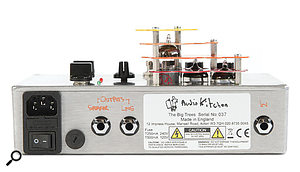 In Clean mode, the signal bypasses the amp circuitry and is fed to the buffered line output, which utilises the ECC83. In Amp mode, the tone stack and gain controls come into play, working much as you might expect. The Dirt control merits a little more explanation: this switch allows you to progressively reduce the headroom in the EL84 output section, increasing distortion and compression, without things becoming unmanageably loud. At the line output this loss is compensated, allowing you to maintain gain structure regardless of settings. The line output level controls greatly expand the functionality, with the ability to tailor exactly how hard you're hitting things downstream. There's enough gain to feed an A-D converter directly using a pseudo-balanced cable, if a suitable instrument input is not available.

It's possible to connect the line output and the speaker output simultaneously. You do not always have to connect a speaker to the amp to provide a load, but it's recommended that you don't leave a 'loose' speaker cable connected to the speaker socket.

Sonically, this is a real treat. I used The Big Trees as an amp feeding a Zilla 2x12 cabinet, as a pedal running into the front of another amp, and as part of a processing chain for mixing, running line level signals to the input via a re-amp box. The Clean side is magical. It's very reminiscent of what a good Echoplex does to the dry sound of a guitar, making it bigger and warmer, knocking the corners off slightly while maintaining a beautiful clarity. As an input device for bass, it has none of the thin pingy quality that affects many direct boxes. It adds depth to vocals and a subtle compression to drums.

The Amp side is, at lower gain settings, capable of very similar sounds, but with the added flexibility of the tone controls. But wind the gain up, turn the Dirt control anti-clockwise and brace for impact — because The Big Trees produces the sort of distortion that you'd expect from a 'dimed' vintage Big Muff. It's an animal. You can destroy a drum kit or a vocal, and turn a bass guitar into what sounds like a distorted synth. Gone is the gentle shimmering clarity: now it's trying to kill you. I absolutely love it. This is not going to be your only amp. Rather, it's a tool for expanding what you already have, for creating new possibilities and pushing production to another level.

It's worth pointing out a couple of things, though. As with many amplifiers it's a necessity of the design that it flips polarity, so that's worth watching out for when using it as a parallel processor in the mix. Also, note that the line outputs are not intended to have any speaker-simulation filtering, as that would greatly restrict the functionality. That sort of thing, of course, can be added in the DAW if desired.

To producer and player alike, The Big Trees has a lot of tricks up its sleeve. It can make things sound warm and lovely, or it can destroy them. It can thicken your vocal, or smash your drums. It can be an amp in the live room, while also feeding line output to the desk. It's not surprising that these have already found their way into the studios and live rigs of Kasabian, Arctic Monkeys, the Killers and the Vaccines. Alan Moulder used one for re-amping sources on the Led Zeppelin O2 DVD. At £600 plus VAT here in the UK, The Big Trees is not a cheap item. But when you hear what it does, it seems worth every penny.