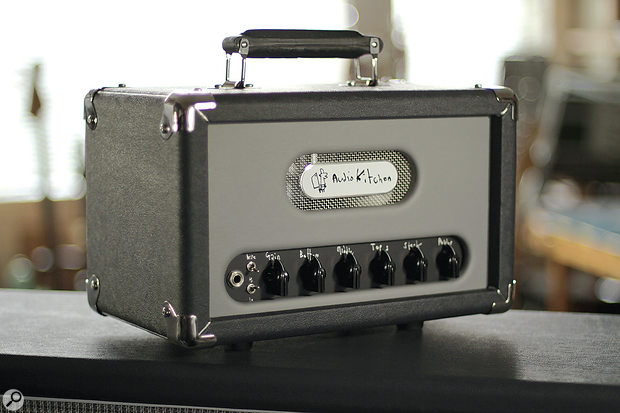 The Little Chopper is a boutique, 7W amp head, with a variable power control which allows the user to achieve their desired sound at manageable levels.

Recording guitar amplifiers presents a perennial problem in all but the most effectively soundproofed spaces: containing the sound of an amp dialled into its sweet spot is an extremely expensive prospect, and in many domestic buildings it's impractical, regardless of cost. The Audio Kitchen Little Chopper is a boutique, 7W amp head, with a variable power control which allows the user to achieve their desired sound at manageable levels. This is not a unique concept, and recently a number of manufacturers have produced similar alternatives.

The Little Chopper, though, sets itself apart from the herd: it's not just a low-cost version or a miniature lookalike with a familiar logo. It's a flagship amplifier in its own right, hand-wired the old way in the London workshop of Steve Crow, a man obsessed with tone. The custom-made components are the finest available and the sounds worthy of some of the greatest producers and musicians in the world: Flood, Alan Moulder, Cenzo Townshend, Foo Fighters, Angus and Malcolm Young, Nick Cave and Kings Of Leon are amongst the Little Chopper's long list of high-profile advocates.

The head is compact, and comes beautifully finished in either Midnight Blue Tolex or the customer's choice of through-dovetailed hardwood. The front panel features familiar controls for Gain, Bass, Middle and Treble, as well as 'Stack' and 'Power', which merit a little more explanation. The 'Stack' control is actually a switch, which takes the tone stack in and out of the circuit. With it in, the tone controls work much as you might expect, but switching it out disables the Bass and Middle, while the Treble serves as a high cut. The 'Power' control allows the user to decrease the headroom of the power amp stage, reducing level but also, crucially, increasing distortion. This control is really where the magic of the Little Chopper resides, working in tandem with the gain control to tailor the amount of gain, compression and sag. Also on the front panel is a High/Low input switch, and Bright switch.

Sonically, the Little Chopper is wonderful. This amp is all about juggling the gain stages. The combination of the High/Low switch, the Gain and the Power controls allows you to tailor the perfect combination of grit, compression and overall level. The amp often sounds better at lower levels as the Power control casts its spell. I found myself working my way around the gain jigsaw, hitting the front harder and turning the gain down, or setting the input to 'Low' and opening the amp up a bit, tweaking the power until the attack of the chords smoothed out and they lengthened into each other. Switching the tone stack out results in a gain boost, and this plays its own role in that process. There are beautiful, sparkling cleans and, if you so wish, bags of gain on offer here. Wind it up and you can go all the way to full-blast AC30 levels of fuzz. For me, though, this amp is all about those elusive 'just-breaking' tones that the best valve amps do so well.

Audio Kitchen also build their own matching 1x12 cabinet, which features an 8Ω Celestion Blue speaker and an ingenious folding panel that allows you to instantly convert it from open-backed to closed-backed, further enhancing the tonal palette.

At £1650 here in the UK, the Little Chopper represents a significant investment. It's not what you'd call cheap, but sonically its competition comes from brands like Matchless and Divided By 13, as well as vintage amps from the likes of Vox and Fender. And put that way, it starts to look rather more affordable.

So, to recap, this little amp is a thing of beauty, something special. It's something carefully designed and lovingly crafted. Something you can't get a plug-in to do, and an instrument that you can use in your home, at a gig or in the studio. It's something for making records with, and it's no surprise that it has attracted the attention of some of the world's most discerning players, producers and mixers.