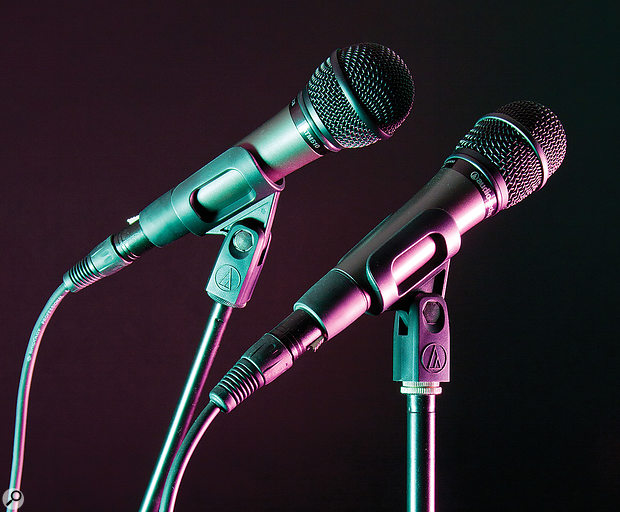 Not every mic on stage has to be one of the usual suspects, as Audio-Technica prove with these two dynamic vocal mics.

Think of Audio-Technica and you probably think of their studio microphones, but the company also build some seriously good models suitable for the stage. Here we're looking at two of their dynamic mics, the hypercardioid ATM610A (pictured right) and the slightly cheaper, cardioid-pattern ATM510.

The ATM610A is voiced for vocal clarity and is suitable for both main and backing vocals. It's powered by a rare-earth magnet and uses a multi-stage grille with an inner foam lining designed to minimise popping. An internal shockmount reduces handling noise, and the basket can be unscrewed for cleaning.

Shipped with a vinyl carrying pouch and a Quiet-Flex stand clip, the mic certainly looks elegant, with a matte black finish to the grille and a metallic grey finish to the body. A thread adaptor to fit European mic stands is included, and a rubber sleeve surrounds the XLR end of the body to aid gripping in the stand clip. The mic is nicely weighted and well balanced, at 270g, and its size is pretty typical of this kind of microphone, being 170mm long and 48mm in diameter at the widest point of the basket. The XLR output pins are gold plated, to resist corrosion.

The mic's frequency response is given as 40Hz to 16kHz, with an open-circuit sensitivity of 55dB ref. 1V at 1Pa. A dual-hump presence peak gives the mic its voicing, with a slight lift at 4kHz and again at around 12kHz. The mic's output impedance is 300Ω.

Although it's a little cheaper, the ATM510 has the same build quality, internal design and general styling as the ATM610A, but is distinguished by a round rather than a barrel-shaped basket. It comes with the same accessories, too, the main difference between it and the ATM610A being that it has a cardioid rather than a hypercardioid polar pattern. It also has a slightly less extended low end (the frequency response is quoted as 90Hz to 16kHz), but the proximity effect when it's used close means that it doesn't lack low end on vocals. Higher up, there's a hint of a presence peak with a similar shape to that of the ATM610A, but slightly less pronounced. Sensitivity is quoted as being identical to that of the ATM610A, and it's only marginally lighter, at 258g, with the widest part of the basket measuring 53.7mm.

These two mics sounded rather more similar to each other than I'd expected, given the more pronounced presence peak of the ATM610A, which came across as only slightly brighter. Neither mic excessively colours the voice, which I feel is a plus point, and both respond well to EQ, so if you need a little more air at the top end, it's easy enough to add it.

There's definitely a sense of what I'd call a 'dynamic vocal mic' sound with both of these mics, which I associate with a slightly mid-biased character, but it isn't overbearing, and these mics certainly stack up well against similarly-priced competitors. The handling noise is commendably low, as is the susceptibility to popping. I checked both mics with my acoustic guitar combo's mic input, and I could manage plenty of level before feedback became an issue.

In all, then, these two mics uphold the A-T reputation for both quality and value, offering a viable alternative to the more common dynamic microphone choices.

Apart from the obvious Shure SM58, other alternatives include the AKG D5, the Lewitt MTP series, and Audix's OM series.