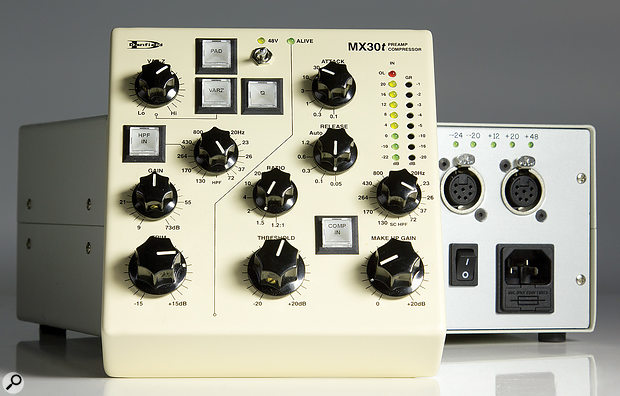 With an emphasis on clarity and speed, and a not insignificant price tag, this preamp/compressor combo promises a lot. Does it deliver?

The name Danfield Audio might not ring bells for many of our readers, but the Danish boutique audio company have, in fact, been around since 1982. In the early days, Danfield started out by making highly customised audio gear for studios and broadcasters, their products ranging from custom-built mixing consoles and mic preamps to proprietary filters, limiters and studio monitor-cue systems. The company's latest design, the MX30T recording channel, is based on past Danfield designs that have proven roadworthy over the years.

This desktop hardware device comprises a mic preamp and a compressor. It's the size of about four stacked CD jewel cases, and is accompanied by a rather hefty PSU, with single or multiple power outlets, depending on client specifications. At the back, four Neutrik connectors cater for microphone input, direct out (pre-compression), main out (post-compression) and a seven-pin power inlet. The top is divided into a preamp and a compressor section, and both sections are ergonomically designed with large, illuminated push-buttons and bakelite-style rotary knobs. The microphone preamp has a gain range of +9dB to +73dB, controlled by a 12-step knob paired with a continuously variable ±15dB trim knob, and together they provide plenty of clean gain. According to the technical specifications, the maximum system level is +27dBu, which is higher than most outboard can handle, but, should the need arise, 20dB of attenuation can be applied in the preamp section. The microphone input impedance is set to 1.5kΩ but is variable between 600Ω and 30kΩ. (Altering the input impedance can bring about changes in the tonality of passive ribbon microphones and older capacitor microphones with an output transformer.) Next up are the usual phantom-power switch and 'phase' (polarity) flip button. Finally, a high-pass filter can be engaged and set anywhere between 20 and 800 Hz.

The compressor is based on a peak-detecting design that Danfield have used in their product line for over 20 years, and it's reportedly well suited to both mastering and vocal applications. The usual compressor controls are present, comprising a ±20dB variable Threshold, Ratio running from a modest 1.2:1 to limiting (20:1), 0.1 to 30 ms Attack, 0.05 to 1.2 second Release (as well as an auto-release setting), up to 20dB make-up gain and a side-chain high-pass filter (20Hz to 800Hz). The gain reduction is indicated by eight red LEDs down to -20dB, and next to these are eight further LEDs that indicate the input level, with a red diode indicating input overloads. Because of the peak design of the compressor, it stings like a Hornet on amphetamines... but more on this later. 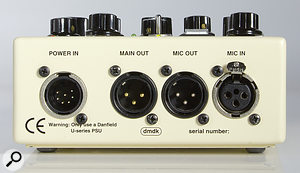 The rear panel of the main preamp unit hosts the audio I/O, including both pre- and post-compressor outputs.

After hooking up the MX30T, I used it right away on a songwriting session, for which I was wearing an AKG headset mic and bouncing ideas for a melody back and forth with an online collaborator. (If you don't have the urge to do the rock star bit with a hand-held mic, and feel somewhat confined staring into a home-made nylon pop screen, I can highly recommend this approach, as it allows you to walk around in the studio, or play your keyboard or guitar and punch in melodies whenever they come to you.) Setting the gain and low-cut filter, I could hear that the preamp had a cleaner and slightly more open sound than my wannabe-vintage preamp with transformer-balanced output. The low-cut filter is one of the most transparent I've encountered: it cut away low-end mud and plosives effectively, without colouring the mid-range.

Engaging the compressor instantly made me aware of its feed-forward peak-detection circuit, because it leaped out like a jungle cat and stomped on every consonant and lip smack. I seldom opt to use peak compression in the analogue domain, and this reminded me of my days engineering radio shows for the Swedish Broadcasting Corporation. I simply had to put aside how I usually set up a compressor, by cutting the ratio in half, tweaking the attack and release settings and just listening to how it behaved. The gain-reduction meter was a great help, providing a fast and accurate indication of how much compression was being applied, without any noticeable fluttering. I ended up with a ratio of just 1.5:1, 10ms Attack, 100ms release and the side-chain filter at about 100Hz.

The session went well and the clean gain and transparent compression made me forget about the recording channel after a couple of minutes — which is just the way I like it.

On a spoken-word recording, the MX30T yet again provided a clean and transparent sound. Using super-fast attack and release settings, along with the side-chain filter set to 800Hz, I was able to tame lip smacks without putting a lid on the rest of the sound. I can't recollect using an analogue compressor as fast as this one — impressive performance indeed.

Setting up my vintage Neumann tube microphone for a vocal recording made me realize the potential of the MX30T preamp. Compared to the preamp I usually use, the MX30T produced a slightly more open sound, especially in the upper mid-range, and raising the input impedance also seemed, to me, to slightly enhance the sound. It's so easy to lose the upper mid-range clarity in a recording chain, and I'm going to have a hard time going back to my own preamp after this experience.

My main vocal compressors are a FET-based 1176 and a diode-bridge Neve clone, both rather colourful. The transparent compression of the MX30T is a totally different experience, but not a bad one. Using a low ratio, 10ms attack, 50ms release and the side-chain filter at 400Hz, letting the body of the vocals punch through, with a maximum compression of about 6-8dB, rendered a very respectable vocal sound. At first, a true peak compressor might sound heavy handed, but if it's properly set, it will only compress the fast peaks and leave the rest of the vocal sound pretty much intact.

I did a brief recording session with an acoustic guitar and, again, both the preamp and the compressor behaved very well, yielding an open sound with lots of string definition. The manual provided a cool tip that made me use both outputs of the MX30T — one uncompressed signal and one rather compressed signal. Due to the perfect phase-coherence, I could mix the two guitar signals, resulting in parallel compression and producing an open-sounding acoustic guitar with some added body from the compressed signal.

The Danfield Audio MX30T recording channel is impressive: easy to use and with a great sound. I'm rather picky when it comes to outboard, but I really like the preamp, and the more I use the compressor, the more I like it too, although it would have been even more versatile with selectable RMS detection. The neat desktop design enables the user to tweak controls while sitting in the sweet-spot position, and I see potential uses in post-production houses and dubbing studios in need of easy to use and reliable outboard with high sound quality.

The price tag may put it out of reach for the typical home recordist but the quality of this hardware and the five-year warranty make it decent value. As a high-end recording channel, it's definitely worth checking out.

There are numerous channel strips available but the only desktop design that comes to mind is the Universal Audio DCS dual preamp and cue mixer — and that's no longer in production. A two-slot 500-series (or other modular) chassis with suitable preamp and compressor modules installed would provide an equally compact alternative.

A slim and easy to use desktop recording channel. The sound quality is impeccable and the peak-detection compression means you can keep the levels under control even in the most difficult recording situations.