The latest version of the Digitech Whammy — the pedal-operated digital pitch-shifter that has been keeping guitarists amused for more than two decades — boasts some interesting new features, but sticks largely to the traditional Whammy formula. While the recent, larger Whammy DT unit added things like a 'drop tune' section for shifting up or down in fixed intervals and a second, momentary-bypass footswitch, the Whammy (5th Gen) goes back to the familiar outline of the original. Quarter-inch input and output jack sockets are joined by a latching on/off footswitch (now true-bypass) and a single mode-selector knob, which scrolls through the various Whammy, harmony and detune modes. 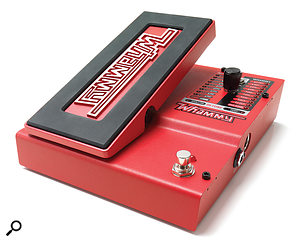 The most notable new feature is also the smallest, on the outside at least. A miniature switch marked 'classic/chords' lets you choose between two pitch-shifting algorithms: the 'classic' Whammy algorithm or a new 'chords' algorithm designed for polyphonic pitch-shifting. Meanwhile, the treadle feels every bit as sturdy as the rest of the Ferrari-red metal casing; an optical design with no pot to wear out, it should prove eminently roadworthy. Finally, there's a MIDI input which allows you to operate the pedal remotely, bypass the effect or switch between the various modes using CC and Program Change messages.

The essential difference between the pedal's Whammy and harmony modes is that in the case of the latter, the original signal is combined with the shifted note to create a two-note chord or dyad. The names of the Whammy modes, where the whole signal is shifted, indicate where you'll end up once you reach the toe-down end of the pedal's travel — a fourth, fifth, one octave or two octaves up, or a second, fourth, fifth and one, two or three octaves down. While the smaller intervals are useful for down-tuning and all sorts of creative effects, it's the two octaves up and down modes that supply many of the Whammy's signature sounds, from vertiginous divebombs to gravity-defying upward bends. In the case of the harmony modes, the pedal sweeps the pitch-shifted note between two set points while your original note stays put, from a fifth below to a fourth below, for example, or from a minor to a major third above. The two detune modes, 'shallow' and 'deep', create a chorus effect by combining the dry signal with a slightly, or slightly more, pitch-shifted signal. Here, the pedal controls wet/dry mix rather than pitch.

By the standards of current-generation pitch-shifting hardware and software, the Whammy feels distinctly unsophisticated. However, the slight phasing that makes very large pitch bends sound strange and artificial, not to mention the odd bit of warble and flutter, is exactly the kind of grit in the oyster that most Whammy fans are looking for. The classic mode does indeed accurately capture the weird and wonderful sound that has been employed so effectively by the likes of Rage Against The Machine and Muse, while the sheer simplicity of the device, with no in-depth parameters to tweak, is a reminder to just put your foot on the pedal and start having some fun.

For single-note work, pitch tracking is sure-footed and the shifted signal sounds full and strong. Try playing a few chords, however, and all sorts of interesting wobbly artifacts are created. Switching to the chords mode clears things up admirably: shifting a chord two octaves up still sounds pretty strange, obviously, but each note remains clear and distinct. For single notes, chords mode is marginally cleaner but the difference is less striking. As this mode increases the amount of delay incurred by the pedal's A-D/D-A converters, which is small but still noticeable in classic mode, users may want to stick with the original Whammy algorithm for single-note riffing in any case.

In summary, this is a strong showing from Digitech, who have captured what was great about the original Whammy while adding a true-bypass switch and the option of a slightly cleaner brand of pitch-shifting that works well for chords. The Whammy is not about subtle, transparent pitch-shifting. It's a performance effect, designed to let guitarists expand the boundaries of their instrument, and the Whammy (5th Gen) fulfils this brief perfectly. David Greeves