The Echo 2 certainly looks the part, with its contemporary touchscreen interface, but does it back up the style with substance? 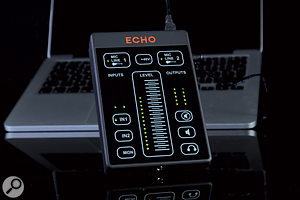 The Echo 2 is a compact two-in, four-out USB 2 interface from a company with a reputation for producing quality soundcards. This is Echo's only USB offering to date, but its release follows some recently developed Firewire interfaces higher up the product range. It features a novel touch-control interface and is supplied with a mic-stand bracket for ergonomic use alongside a computer or an iOS device, with which it is compatible. In addition to its audio interface duties, Echo are marketing the device as a 'personal mixer' that can be utilised in rehearsal or performance situations without being connected to a computer or iPad.

On removing the Echo 2 from its packaging, I immediately noticed the rubberised finish to the case; a pretty smart move for making such a portable device more rugged. The bracket screws into a thread on the underside of the unit for optional mounting on a mic stand, making the controls more easily accessible to the performer. The acrylic touch panel is appealing to the eyes and its various controls are sensibly laid out and labelled. Indeed, it's fairly simple to work out what everything does without having to reach for the manual. The capacitive panel is scratch resistant, but the manual reminds the user to take care not to damage it. Two pairs of eight-segment LED meters provide level indication for inputs and outputs, and a large LED level fader is situated prominently in the centre.

On the rear of the case, four balanced TRS jack sockets provide connections for inputs and outputs 1-2. For the inputs, two short TRS jack to female XLR adaptor cables are supplied, with which to connect microphones. This is a neat idea that keeps the case compact and negates the need for a breakout cable. Meanwhile, on the front of the interface, a 3.5mm stereo output is provided for the independent headphone mix; the socket also doubles as line outputs 3-4. Unlike similarly proportioned units that have breakout cables, the Echo does not have digital I/O, or even MIDI, so this is worth considering when comparing specifications or assessing how many USB ports may be needed! An external power supply is included in the box, and this is used for either stand-alone operation or when phantom power is called for.

Installation proved to be a very simple process indeed. No driver is needed for Mac OS, so I was ready to record just a few minutes after opening the box. In Audio MIDI Setup, I was able to assign the four outputs to the relevant connected speaker channels and, helpfully, the volume control on the computer keyboard is still functional whenever the device is in use. Windows users do need to install a driver from the Echo web site, but aside from this, no additional software is required for either platform. So far, so good. 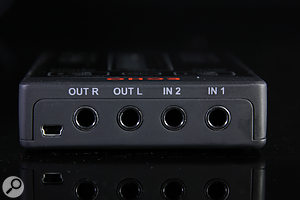 At the back of the Echo 2 are a USB port and stereo inputs and outputs on quarter-inch jacks. But that's not all: at the other end, there's a single 3.5mm headphone port, and to the side an input for the external power supply.

When putting the Echo through its paces, the high quality of conversion is plain to hear from the outset. The Echo yields an open, natural high-mid range, and the mic preamps sound very musical and detailed too, with noise only becoming noticeable at excessive levels of gain. The preamps add up to 75dB of gain at microphone level, and so can easily handle less sensitive dynamic and ribbon microphones. Phantom power is applied to both inputs simultaneously — toggled on and off by a two-second press and hold — and this global switching could perhaps be viewed as an unfortunate limitation, given the retail price of the unit. Like other highly compact interfaces, there is no sensitivity pad or high-pass filter.

When recording, the controls are all in just the right place, and it's very handy to be able to mute the control-room mix when microphones are record enabled, to avoid any feedback. It's extremely easy to get set up and ready to record. This said, I did find the touch interface frustrating at times. Each button seems to require a press and hold of around a second to operate — certainly longer than the half a second quoted by the manual — and this can seem to slow the process down considerably if you're used to the far faster response of a smartphone or tablet touchscreen. This measure is meant to avoid accidental button presses, but the duration for this 'safety buffer' seems far too long when you're trying to work. I also found the level fader difficult to operate at times. You have to start swiping in just the right place to get the level to change, and a relatively steady movement is required for the control to operate successfully.

When setting input levels, in addition to manual setting using the level control, an 'EZ Trim' function may be employed to automatically set the preamp gain. You simply press and hold the relevant input button until it flashes, and sing or play the loudest section to be recorded. The function calculates the appropriate gain level based on an analysis period of 12 seconds, and then allows you an additional 2dB of headroom in case the performance becomes more enthusiastic once recording starts! This feature worked very well in practice, and didn't result in any lower than optimal recording levels, as I had initially expected.

As part of my testing, I recorded a series of acoustic instrument tracks using a mixture of hardware and software monitoring. Hardware monitoring is accessed using the 'MON' button on the bottom left of the panel. The level fader is then used to unmute and control the level of the direct-monitored signals to be fed to the headphone mix. With no foldback mix software present, the user isn't able to control the individual monitoring level of each input, but two modes are available to toggle between summing the input signals in dual mono and monitoring with inputs 1-2 positioned hard left and right, respectively.

When monitoring the input signals through software, I was able to select extremely small buffer sizes in the DAW audio preferences, which resulted in negligible latency. The interface coped well throughout, without any unwanted side effects, and was able to add a reverb on an aux send as a comfort effect to aid the performance being recorded.

Finally, the marketing of this unit as a personal mixer is a little confusing. There's not much information on the Echo web site or in the interface's manual, but if Echo intend it for use during performances to control relative levels of vocal microphone and instruments and provide a personal foldback mix, it would be suitable for that. Some onboard EQ and reverb would have been a really splendid idea, however. The unit does automatically retain settings in internal flash memory, which is useful, aside from phantom power being switched off each time the Echo is powered down.

All in all, the Echo 2 is nicely built, easy to use, sounds very good, and behaves itself at low buffer-size settings. Its simplicity will appeal to those who need high-quality conversion plus only a few analogue inputs and outputs for recording and monitoring. The touchscreen is an appealing idea, but in practice it does take some getting used to and potential buyers should perhaps seek to spend a few minutes playing with one before purchasing.

The Alva Nanoface is well worth consideration as a unit of a similar size. In fact, it boasts more features than the Echo 2 at approximately half the price. It's not quite as intuitive to operate as the Echo and doesn't have a mic-stand bracket or iOS compatibility, but its versatility and respectable sound quality make it a good bet. However, there were a few issues with Mac OS drivers at the time of the SOS review, so it would be worth investigating these before taking the plunge.

Meanwhile, at a slightly higher price point, the Apogee Duet 2 has a similar feature set to the Echo 2, but with an emphasis on ultra high-quality preamps and converters. Differences in specification include a mono button on the monitoring section, phantom power switching per channel and a polarity inversion option on the preamps.

A high-quality, easy-to-operate device with a novel user interface. Although the Echo 2 sounds great and operates well at low latencies, the touchscreen may not appeal to all and renders the unit fairly expensive.