There are plenty of eight-channel Firewire interfaces on the market these days, so what does the Audiofire Pre 8 have that the others don't?

Choosing an audio interface for your music computer doesn't get any easier, especially as there are now several rivals offering almost identical feature sets. If you're after a compact rack unit with eight mic preamps and multiple outputs, existing options include M-Audio's Profire 2626, Presonus' Firestudio 2626, MOTU's 8Pre and Focusrite's Saffire Pro 40. The latest contender in this field is Echo's Audiofire Pre 8.

Like the others, it connects via Firewire, and multiple units can be 'stacked' to provide additional preamps and I/O. It's also expandable through its digital I/O, with electrical S/PDIF and optical ports that can provide either stereo S/PDIF or up to eight channels of ADAT I/O. Unlike some of its rivals, it features dedicated word-clock BNC connectors; there's also MIDI In and Out to complete the party. The Audiofire Pre 8 cannot be bus-powered, but has a built-in power transformer, so can be plugged into the mains without requiring an external power supply.

The Pre 8's physical layout is very similar to that of the Saffire Pro 40, in that all the I/O is on the rear panel with the exception of the headphone outputs and the inputs to the first two 'super' channels. These can be used to connect microphones, line-level sources or electric guitars, and have individually switchable phantom power, -20dB pads, polarity reversal and 80Hz high-pass filters, plus rear-panel insert points and the intriguing option to cut the normal 3kΩ impedance of the microphone input to 1kΩ. The remaining six inputs have globally switched phantom power and lack the other features. Inputs are all on combi jack/XLR sockets, with outputs on balanced jacks. Hardware metering consists of a four-LED ladder for each input.

The front panel has inputs for channels 1 and 2 and gain controls for the unit's eight mic preamps — but only one volume control for the two headphone ports.The Pre 8 comes with a CD containing Windows drivers — Mac ones aren't needed — along with a PDF manual and the Echo Console and Firewire Analyzer utilities. Unusually, there's no bundled recording software: Echo told me that, according to their own research, most people who buy their interfaces already own a DAW and never registered the versions of Cubase or Tracktion that they used to include.

Installation is remarkably easy on both Windows and Mac OS, and the Echo Console software utility is also a cut above its rivals in terms of ease of use. It has a separate mixer tab for each output pair, showing the eight analogue inputs, up to eight digital inputs, and a stereo channel that lets you adjust the level of whatever DAW playback is routed to that output pair. Everything defaults to stereo, but can easily be unlinked if you prefer. Compared to Focusrite's Saffire Pro control panel, which still occasionally confuses me after a year of use, it's a model of clarity. It also has the major advantage that all of the inputs are available for low-latency cue mixing to all of the outputs: most of the Pre 8's rivals only allow a subset of the inputs to be used. A separate Settings page allows you to switch sample rates, digital mode and so on; although there's nothing to indicate successful clocking to an external device, the option will be greyed out unless a valid clock signal is received. The Pre 8 can be used as a stand-alone preamp and mixer, its flash memory retaining the settings last used.

The Console utility isn't perfect, but most of its imperfections are minor. There's no way of copying cue mixes from one output pair to another, which is annoying, and personally I'd prefer it if pan controls on mono channels defaulted to the centre position. It also seems odd that you have to collapse the view of the analogue inputs in order to look at the digital inputs; I'd have thought that there was plenty of room on most monitor screens for the entire mixer. Finally, there's no meter to show the signal on the DAW return channel, which is puzzling, though hardly a disaster.

The buffer size can be adjusted in 32-sample increments, right down to a minimum of 32 samples. Performance with my test PC was roughly in line with other Firewire interfaces, meaning that as long as material was stored on the internal hard drive, I could usually work at a 64-sample buffer size at 44.1kHz. I also tested it on an Intel iMac running OS 10.4.11, where it was likewise happy at 64 samples.

The rest of the Audiofire Pre 8's audio sockets are found on the rear panel, along with a pair of Firewire ports, MIDI I/O sockets and a connection for the internal power supply.

In use, one limitation of the Audiofire Pre 8's design quickly becomes apparent. Like the Saffire Pro 40, it is fitted with two headphone outputs, but here they are both hard-wired to output pair 1/2 and governed by a single volume control. Meanwhile, the main front‑panel volume control is also hard-wired to output pair 1/2, although, fortunately, it doesn't affect the level in the phones. This arrangement certainly limits the usefulness of the headphone outputs when compared with rival products. Not only does it mean that you can't have two separate headphone mixes for two performers, or one performer and an engineer, but you can't have a headphone mix that is not mirrored on the main outputs. For example, if the engineer wants to solo an individual input on one pair of headphones, to check that it's not clipping or crackling, his actions will be carried across to the other headphone output and the main stereo outputs also. You could get around this by using a different output pair to feed your studio monitors, but if you do, you'll have no hardware level control!

Likewise, if you want to use the Pre 8's multiple outputs for surround monitoring, you'll need to have a suitable monitor controller, because neither the hardware volume control nor the Console faders can be ganged to work across six channels. I appreciate the peace of mind that a true analogue volume control provides in the event of some system SNAFU sending full-scale digital noise through the main outputs, and Echo also pointed out that digital volume controls compromise dynamic range at lower levels. However, there's no denying that the digital controls offered by the Pre 8's rivals are more versatile.

That aside, I liked the Audiofire Pre 8 a lot. It certainly sounds very good: during my tests I tried running it both from its own internal clock and synchronised via ADAT to an M-Audio Profire 2626 audio interface, and noticed a slight improvement in the former case. The DI inputs and line inputs all sound excellent, providing noise-free performance and a rich sound. The Pre 8's 'Brilliant' preamps are clean and remain hiss‑free even at the very top of the gain range. Compared with those in the Focusrite Saffire Pro 40, they seem to me to have a slightly softer and more rounded tone, which I like; on some sources they make the Pro 40's preamps sound a touch strident by comparison, though the difference is not huge, and the usual variables of mic choice and placement will have a far greater influence on the recorded sound. Both units have almost exactly the same amount of preamp gain available (the Pre 8's specifications quote a maximum of +59dB). Oddly, however, the Pre 8's two 'super' channels seem to have slightly less gain than the remaining six, and they also buzz slightly at the maximum gain setting, even though the standard channels remain clean.

The 'Lo-Z' option on the 'super' channels is a feature I've only ever seen before on high-end stand-alone preamps, and can provide some interesting, if very subtle, tonal variation. I have a handful of old dynamic and ribbon mics dating from the time when 300Ω input impedances were the order of the day, and switching the Lo-Z button in and out made a noticeable difference in some cases, most obviously in the low end. That said, even the low setting still leaves the mic seeing 1kΩs, and in any case it's a struggle to get enough gain from the Pre 8 (or any of its rivals) for some of these mics. 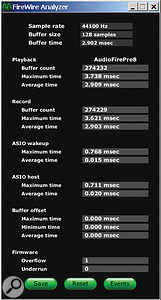 The bottom line is that I would very happily use the Audiofire Pre 8 for day-to-day recording duties, just as I have the Saffire Pro 40 and Profire 2626. But would I choose it over either of these two rivals, given that at current street prices it would cost me an additional $200 or so? Well, maybe. If your priority is audio quality rather than sheer number of features, I feel there's a small but perceptible difference between the Pre 8 and the Profire 2626, and some will value this enough to pay the extra and forego the latter's lower price tag, additional pair of ADAT ports and pads on every channel. The gap between the Pre 8 and the Pro 40 is rather closer; the Pre 8 gives nothing away in terms of audio quality, and its 'super' channels have some neat features, but the Pro 40 is more affordable and more flexible, especially as it too now supports 'stacking' of multiple units and stand-alone operation. Bring into the equation the MOTU 8Pre and Presonus' Firestudio range, and it's clear that we are spoiled for choice, but the Audiofire Pre 8 is definitely an option that should not be discounted.

An interesting and useful inclusion is the Echo Firewire Analyzer utility, which collects and displays data relating to the successful — or otherwise — transfer of data between your computer and the Audiofire Pre 8. You'll need to refer to the PDF manual to find out what all the figures mean, but in theory, the information they provide should help to tell you whether a rogue device driver is hogging the bandwidth that the Pre8 needs.

The Audiofire Pre 8 is another fine interface from Echo. It is neither the cheapest nor the most flexible of its type, but places a premium on sound quality and ease of use.