The Blackbird from Effectrode is a two-channel, valve-driven guitar preamp. Essentially the front end of a valve amp stuffed into a pedal, the Blackbird can sit in front of your amplifier, putting two additional, footswitchable channels at your disposal. It's also equipped with a speaker-simulated direct out for recording, feeding a PA or practising with headphones. The unit uses three dual-triode valves, the first two providing up to four cascaded gain stages and the third driving the buffered output. It ships with three 12AX7 tubes installed, but the first of these can be swapped for a different valve of a similar type (12AT7, 12AY7 and so on) to change the pedal's response and gain characteristics. 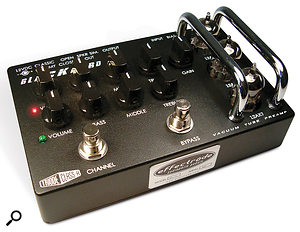 With its busy, businesslike exterior and protective chrome 'roll bars', the Blackbird makes a strong first impression. Weighty and solid-feeling, the pedal's high build quality is immediately evident and continues on the inside, with sealed Omeg pots, audiophile-grade components and gold-plated circuit board tracks. The pedal's stated aim is to offer 'blackface' Fender-style clean sounds on the first channel, and Dumble/Soldano-style overdrive on the second. Each channel offers its own bass, middle and treble EQ controls, based, we're told, on the interactive tonestacks in the 'blackface'-era Fender Twin Reverb amp, and while the clean channel has only a volume control, the drive channel has volume and gain knobs. The drive channel is also equipped with a 'classic/creamy' toggle switch, which lets you choose between asymmetrical and symmetrical clipping distortion. The whole thing is powered by a 12V DC mains adaptor and Effectrode have sensibly included a good-quality wall-wart adaptor with the Blackbird.

The clean channel delivers on its promise of blackface-style tones, adding a pleasing chime to the top end. The volume control can provide a relatively small but nonetheless useful level boost, but it will also attenuate, meaning that you can turn your amp up into overdrive then use the Blackbird to dial back your signal level for a cleaner sound. The EQ controls are excellent, seeming to provide adjustment in the just the right places. The treble control, in particular, is great for adding or taming top-end bite. The drive channel, meanwhile, is all about distortion and sustain. The ability to switch between asymmetrical and symmetrical clipping is an unusual feature but a highly effective one. It provides two distinct voices, one smoother and favouring even-order harmonics, the other more aggressively clipped for more grit, saturation and sustain.

The ability to switch around the first preamp valve is another unusual touch. Experimenting with 12AU7 and 12AT7 varieties reveals that this is an effective means of altering the amount of gain and distortion on offer from the drive channel. Don't expect a radical tonal change, but switching to a lower-gain valve will noticeably change the behaviour of the gain control and the amount of saturation. The three-position bias switch, used to set the correct bias point for your chosen tube, can also be used to make the valve in the first position run 'hotter' or 'colder'. For those who really want to fine-tune the Blackbird's response, an internal trimpot lets you further adjust the bias voltage.

The Blackbird's clipping distortion can sound a little harsh in isolation and the pedal performs best driving a good valve amp or valve-amp simulator. In fact, the speaker-emulated out is the only real disappointment: it sounds rather muffled and lacking in top end. For recording purposes, using the Blackbird's standard output in combination with one of the many bits of amp and cabinet modelling software currently available is a much better bet.

While it has many potential uses, this pedal seems like a good companion for a single-channel, non-master-volume valve amp. While many boutique pedals seem to specialise in the kind of low-gain overdrive that this sort of amp can usually manage all by itself, the Blackbird will add two extra channels (three if you count the classic/creamy toggle switch) which do things it probably can't: bell-like, blackface-style clean sounds, Dumble-style saturated overdrive and Soldano-style distortion. There are countless other dual-channel preamp/drive pedals on the market, many of which are much cheaper than the Blackbird — but few can match the build quality and unique features on show here. David Greeves