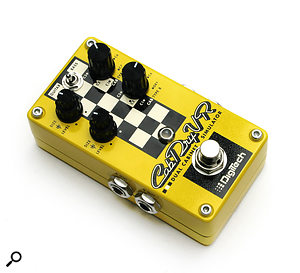 DigiTech’s take on this is a compact stompbox-format dual-channel cabinet emulator. It allows full dual-mono operation, processing two inputs separately. Alternatively, a single guitar amp can be processed using two different virtual speaker cabinets, or the pedal can process the guitar on one channel, while also outputting a dry signal on the other.

The CabDryVR input can only accept line/instrument signal levels, such as from your guitar, from your pedals, or from a preamp line output or effects send. It can’t receive the output directly from a power amplifier, though — you’d need to route the power amp output to the CabDryVR via a DI box that can accept speaker-level signals. It’s also worth noting that there’s no dummy load built in — for use with valve amplifiers, the speaker or a separate dummy load needs to remain connected.

The CabDryVR is built into a sturdy cast case, with the dual inputs and outputs on metal jacks, and it comes with a StompLock rubber protector which slips over the controls to prevent them being knocked during a performance. Power comes from a 9V adaptor such as Digitech’s own PS0913DC (125mA or more), though this is not provided and battery operation is not supported. If only input A is used, the signal is sent to both channels. The pedal has a true-bypass footswitch, with an LED to show whether the pedal is active (green for guitar, yellow for bass). This LED also flashes red if clipping is detected.

The emulations are based on two sets of seven cabinets: one set for guitar and the other for bass. A Guitar/Bass switch flips between the bass and guitar cabs, and although you can run two separate cabs this is a global setting — you can’t set one channel for guitar and the other for bass. The cabinet type on channel A is selected using a seven-position Cab Type rotary switch. Channel B has a similar knob which serves up the same first six cabinet types, but its last position is the dry, unprocessed analogue out. This last position makes it possible, for example, to send an emulated DI from channel A to the front-of-house mixer, and a dry version to an on-stage amp. Each channel also has a dual-concentric control to adjust the output level and to tune the cabinet size, presumably by changing the length of the IR. Note that, as IR processing inherently adds a tiny delay, the emulated and dry outputs will not be exactly in-phase, so if using both at the same time some form of delay compensation may be needed to avoid tonal changes if the signals are combined.

The emulations are of popular US and UK cabinets, and these include 2x12-, 4x12- and even 1x8-inch models for guitar (oddly, there’s no 1x12) and a selection of 15-, 18-, 4x10- and 8x10-inch cabinets for bass. So the cabinets on offer cover a lot of tonal ground, and while it’s impossible to confirm with certainty which amps/cabs were used (differences in mic choices and placement prevent that), I can vouch for their musicality. The size control moves the resonances in the response and performs a useful role in helping tune the cabinet to the task in hand.

For live use, where the amplifier being DI’d has a non-emulated line output, the CabDryVR has a lot to offer, not least the ability to add interest in stereo by running two different emulations simultaneously.In the studio, on the other hand, the CabDryVR covers similar ground to so many IR-based software speaker-cabinet emulators. Yet, it does have its own unique voice, which sounds good — it could be used to give the line output of your recording combo a whole new set of voices or, in place of EQ, to process the output from your pedals to produce a workable sound when the amplifier is absent from the signal chain (since most guitar amps lean towards boosting the mids and highs rather than offering a flat response).

Ultimately the CabDryVR does what it sets out to do and it does it well, and the two-channel format marks it out from the competition — while I find that my BluGuitar BluBox, which can also accept speaker-level signals, sounds even better, the CabDryVR is around half the price and can serve up twice as many cabinets at a time.