While we’ve all been sitting waiting for the next big thing in studio recording, there’s been a quiet but very significant revolution going on literally beneath our feet in the world of effect pedals. While Melodyne DNA was the first product to unpick polyphonic material in a software environment, the first hardware product that came to my attention was TC’s PolyTune polyphonic guitar tuner. Up until then it was considered nearly impossible to cram enough DSP into a pedal to separate up to six notes coming from six different guitar strings via a standard guitar pickup. It seems there was also a lot of work going into polyphonic processing at Electro–Harmonix, the most dramatic outcome of which was the unveiling of their B9 and C9 organ emulation pedals. 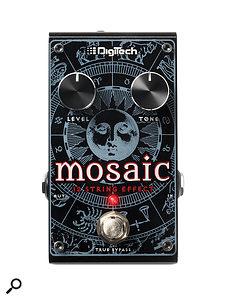 The Mosaic takes a different approach, using polyphonic pitch-detection to decide which notes need shifting up by an octave and which simply need to be doubled with a hint of detuning.

Now, DigiTech have combined their expertise in pitch-shifting with polyphonic pitch-detection to create the Mosaic 12 String Effect pedal. This comes with its own 9V DC universal power supply and pin adaptors for US, European and UK plugs. (There’s no battery-power option.) While standard pitch-shifters allow you to add a one–octave–up copy of whatever you play, the result never quite sounds like a real 12–string guitar. One reason is that a standard 12–string guitar has the top two strings tuned in unison and the rest in octaves, but the audible ‘warbly’ side effects of many basic pitch-shifters also give the game away.

The Mosaic takes a different approach, using polyphonic pitch-detection to decide which notes need shifting up by an octave and which simply need to be doubled with a hint of detuning. The Mosaic has no way of knowing which string or fret position you are playing, of course, and it seems instead to employ a pitch–related split point at which octave notes become doubled notes, but in a normal playing situation the end result sounds surprisingly convincing. Moreover, the quality of polyphonic pitch-shifting is very smooth, and even complex chords with unfriendly intervals (major sevenths, for example) don’t upset it at all.

Operationally, it couldn’t be simpler. The left of the two knobs adjusts how much of the doubled/shifted sound is added to your original guitar sound, while the right-hand knob adjusts the tone of the processed sound. And when you hit bypass, you get a true, hard–wired bypass.

Setting both controls around half way gives a pretty convincing electric 12–string sound that compares favourably with the emulations produced by hex pickup systems such as a Roland VG processor or a Line 6 Variax. The effect also works well on an acoustic guitar with a pickup. There’s just the right amount of subtle detuning to produce a plausible 12–string shimmer, but as you’d expect, when playing electric guitar, this works best played into a fairly clean amp where guitars with single–coil pickups produce the most ‘chimey’ sound.

I predict that we’ll see a lot more ‘impossible’ guitar processors encroaching into the province once dominated by hex–pickup guitar–synth systems in the next few years, and DigiTech’s technical background makes them well placed to be a major player in this area. Do try the Mosaic. You might have tried things that claim to do this before, but this one really works!