This library comprises 836 live drum loops, organised first by style (Garage, Hard Rock, Punk and Rock) and then into notional 'song' folders, each containing roughly half a dozen same‑tempo loops, variations and fills, presented in both dry and roomy mix versions. In terms of performance, there's clearly a lot of enthusiasm on the part of the player, and that translates into a kind of cross between the Sex Pistols and the Who: the beats tumble out so splenetically that you'd be forgiven for wondering whether the drummer's going to make it to the end of the song with his instrument — or indeed himself — intact! As such, this feels pretty well in line with the stated manifesto of this library, but it's worth mentioning that the groove/timing of the playing isn't, therefore, as consistent as you might have come to expect from more typical drum loop libraries, so fitting these samples under pre‑existing tracks may present a bit of a tougher job than normal. 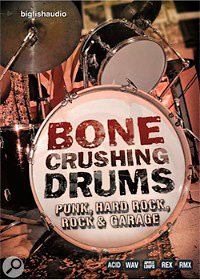 I think the sonics may be a bit of an acquired taste, even for this library's target market. The kick is often very resonant, something that seems to be helped along by a certain amount of low-tom spill, and if you need space for a bass part, it's not easy to create that without robbing the drum of weight. The hi‑hats and cymbals often feel overbalanced, at the expense of the snare, while the snare frequently seems very reliant on an uninspiringly dull‑sounding close mic. The overhead mics sound like they're too close to the cymbals as well, which makes for a harsh sound in many of the dry loops that I personally found too abrasive. The wet loops were better in this regard, but the snare then just seemed to get more woolly and, overall, the room sound came across as rather boxy and not tremendously appealing.

That said, the loops don't all share the same sonics, so there's a greater chance that one of the available sounds will tickle your fancy. The flip-side of that is that you can't by any means assume that loops from different sections of the library will match — and browsing around for additional similar‑sounding variations on a theme will be something of a lucky dip. There are no single hits either, which would have added some extra flexibility.

Now, I'm the first to admit that sonic judgements are pretty subjective, and if you disagree with my impressions in that respect, there's a lot to recommend this library in terms of the breadth of material and the sheer sweaty basement attitude. However, there doesn't seem to be much value added in terms of usability so, even leaving the quality of the engineering as a moot point, I'd still stop short of wholehearted endorsement. Mike Senior