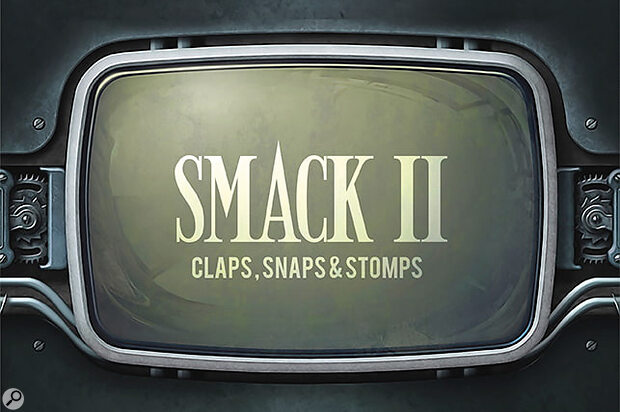 Big Fish Audio’s Smack became something of a staple for stomp, clap and finger‑click sounds after it was released in 2015 (see SOS September 2015 for a review). BFA have now released a follow‑up suitably titled Smack II. With over 3GB of sample content, a considerably expanded range of sounds/articulations (including some electronic sources), and multiple room and mic options, BFA are clearly attempting to deliver the complete one‑stop shop for your body percussion needs.

The four main Kontakt presets each provide different mixtures of the various stomps, claps and snaps. Three of these are based upon ‘human’ sounds recorded in a small studio, medium hall and large hall respectively. The combination of three mic options (close, stereo and room) and a comprehensive effects section (top left), including delay and reverb, means you can dial in any ambience style to suit your musical needs.

Smack II’s articulations are much expanded over the original. It includes the single/group versions of claps, snaps and stomps, but there are articulations such as chest hits, leg slaps and stomps based on a whole range of different surfaces such as wood, concrete, plastic packing materials, a blanket, and a guitar case with a tambourine on top. Within each of the main presets, these are mapped in colour‑coded groups across the MIDI key range, with each group getting its own fader (and effects options) within the lower half of the UI. Alongside an expanded set of options in terms of group playing (single, duo, four person, eight person and 14 person in some cases), these additional articulations provide you with a huge variety of sounds to work with. The sampling seems deep and there are plenty of round robins.

...additional articulations provide you with a huge variety of sounds to work with.

Additional presets are provided for individual articulations, as well as some with alternative key mapping. However, the real bonus is the fourth of the main presets. This is an excellent addition, providing an electronic suite of clap, snap, percussion and stomp (kicks and toms) style sounds. These complement the actual body percussion really well and add both further variety and value to the overall library.

The single‑window UI is also pretty slick and includes a separate preset system for the effects section. This is well populated with presets that can instantly add a range of mix flavours to any of the instrument presets. In addition, the UI also gives you the options to control performance dynamics via MIDI CC rather than MIDI velocity. Linked to your mod wheel, this is a tremendously effective way to add performance expression.

BFA offer a discount on Smack II for owners of the original and, if Smack is something you use regularly, then Smack II is most certainly a significant step up in terms of sounds, articulations and flexibility. There is also a bundle pricing for both libraries but, for those just looking for a first Smack (eek!), personally, I’d go straight to Smack II. Highly recommended.