Cinematic Motion is a multi–format collection of loops for the budding composer of high-octane drama, whether for the big screen, games console or TV. The three formats included are: Apple Loops, REX and Acidised WAV. Since this duplication results in a download of around 5GB, I for one would have welcomed the opportunity of picking just one format and grabbing that.

A Logic user (for my sins), I concentrated on the Apple Loop versions, importing them painlessly into my existing loop library. The original key and tempo is shown and the content responds to Logic’s category searches as expected.

There are 978 loops in total, arranged by key and for each there’s a pre–mixed demo of how they all hang together. There are also DAW sessions so you can load in ready–cooked arrangements of the loops, laid out in advance to save you the effort. It means the busy composer need spend the minimum of time assembling his day’s output before getting back to posting pictures of his lunch on Facebook. 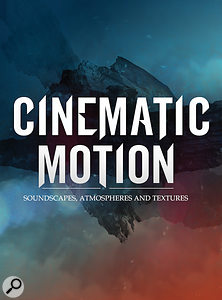 Typically you’ll get four or five choices of each loop type from categories such as Ambiences, Drones, Pads, Pianos, Pulses, Sequences, Synths, Strings/Orchestra and SFX. Many of the loops are over 64-bars long and all are heavily produced, so there’s no fear of having to tweak them other than setting the level. Some loops are more versatile than others. For example I’m sure I could always find a place for some of the huge, reverberant noise sequences. Many of the sound effects are excellent too, including some gently shifting rainsticks, cymbals and cool sound-design washes. Kudos too for a large percentage of the assorted ambient mush and processed textures; these could be dropped into many scenarios ‘as is’ to lend your productions an instant touch of class. Similarly, the pads could prove tempting — especially if you can’t afford Omnisphere or Alchemy. Even some of the pre–made sequences are generic enough to use — or to inspire the creation of something original around them. I was less convinced by the synth brass and piano loops, but that might just be a taste thing as they are well–executed and splash happily around in a posh reverb that fits the established vibe. Actually, the collection is only really let down by its surprisingly pedestrian string loops. Rather than lush orchestral recordings these resemble the kind of thing you’d knock up on a wet Friday afternoon with Kontakt and Logic’s Space Designer.

Although the theme is ‘motion’, I found auditioning hundreds of ambient, drone, sound-effect and pad loops to be incredibly soporific and if you leave out the pulses and noise hits, this might be the perfect musical gift for insomniacs. Ultimately, the construction–kit approach won’t suit everyone, but if speed is more important than originality, Cinematic Motion is reasonably priced and some of the elements should have a decent shelf–life. Paul Nagle