If anyone can tease ‘that’ valve optical compressor sound out of a single-width 500-series module, Dave Hill can...

In the early ‘80s, Dave Hill was asked to design a valve compressor that would have the sound of vintage valve models. The result was the Summit TLA-100, and because of its success Dave went on to design (and to set up manufacturing for) the entire Summit Audio product line until his departure in 1994. He founded Crane Song in 1995 and, in addition to three Pro Tools plug-ins (http://sosm.ag/crane-song-plugins), the company now produce a range of hardware products, including three valve-based 500-series units, the Syren preamplifier, the Insignia equaliser and this, the Falcon compressor. 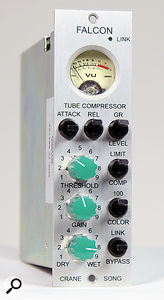 The cream front panel, three green knobs and six black switches are a Crane Song signature and, surmounted by a single circular VU meter, these give the Falcon a distinct identity. Packaging a circuit based around a 12AX7 (ECC83) dual-triode valve running at 200V in a single-slot 500-series format is an impressive engineering feat. So too is giving the Falcon such flexible facilities on a front panel that doesn’t look or, more importantly, feel overcrowded.

The Falcon’s Attack and Release switches each have three settings: fast, medium and slow, with fast being the upper position. These switches sit directly above the three green knobs that, respectively, control the Falcon’s Threshold, make-up Gain and Dry/Wet output mix.

The remaining switch on the top row toggles the VU meter display between gain reduction and output level and sits above another three switches, the first of which selects either hard-knee (Limit) or soft-knee (Comp) operation, changing the Falcon from a limiter to a compressor, depending on the chosen characteristic. The Color switch in its 100 position removes the negative feedback from the valve circuit, and restores it in its alternate setting.

The final switch has three-positions and not only controls the bypass and in-circuit status, but can also link the Attack, Release, VU, Color, Threshold and Bypass settings of up to six Falcons, with the first in the chain being the master. In Link mode, the individual units’ gain-reduction circuitry tracks to within 0.1dB. Linking is achieved not through the 500 rack’s own link function, but with a short custom jumper cable that connects two adjacent Falcons together via a connector that sits inside a cut-out on the units’ top edge. A small Link light next to the VU meter illuminates when the function is activated. Gain, Dry/Wet and Limit/Compress settings on the individual linked units remain independent and therefore have to be set manually.

To give it the performance characteristics of a vintage ‘optical’ compressor, the Falcon carries Dave Hill’s proprietary emulation of the slower reaction times of the resistive opto-isolator circuitry found in early compressors such as the Teletronix LA-2A. The Falcon is configured as a feedback compressor, whereby the input to the side-chain circuit (that calculates the amount of compression required) is taken from a point after the signal has passed through the gain-reduction circuit itself. As a result, this feedback loop alters the compression ratio depending on how much gain reduction is taking place, and this tends to give an overall smoother, less aggressive-sounding compression. Because the amount of compression is determined by an already-compressed signal, the time set by the front-panel release switch is modified by the feedback loop. This has the effect of making the actual release time program-dependent, since the release time will be longer for peaks that go well over the set threshold and shorter for peaks that just exceed it.

The 12AX7B valve stage follows the gain control, and it’s capable of adding 15dB of level. Gain is not its only role, though — the choice of no negative feedback offered by the Color switch results in a less refined, but somewhat richer, sound than the cleaner, more accurate sound when negative feedback is engaged. Combined with a bit of extra drive from the gain control, these choices give you different sound ‘colours’ with which to experiment.

The 12AX7 drives a solid-state output stage, and the Falcon’s signal reaches the outside world via a Lundahl LL1585 balancing transformer, which is a very high-quality, high-headroom device that’s easily capable of delivering the Falcon’s maximum +26dB of level without saturation.

In my setup, the Falcon’s natural home would be either sitting across an insert point or operating as one component in a 500-series ‘channel-strip’. With the input level set to peak at around +3 or +5 on the VU meter, to give the compressor something to chew on (courtesy of a Sonic Farm Silkworm 500-series mic preamp), the Falcon turned out to be one of the most intuitive compressors that I’ve ever reviewed.

Set the output to wet, set the Attack to fast, Release to medium, take the Falcon out of Bypass and wind up the Threshold until you get the amount of compression that you need, match the bypassed and gain-reduced signals with the Gain control and that’s about it — instant great sound and instant gratification, as the program-dependent release time does its thing. From this point on, it’s all about getting the precise sound that you want to hear — maybe increase the attack time to let faster transients through, increase the release time to get a bit of pumping going, explore the difference in sound between the hard and soft-knee compression curves and check out the effect of switching between negative and no feedback in the valve stage. I was pleasantly surprised by just how much sonic variety could be found in the interaction between the Falcon’s controls, despite the fact that the preset Attack and Release times might initially have led me to think otherwise. 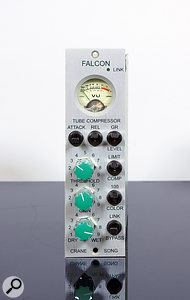 However, the icing on the Falcon’s cake is the Wet/Dry output mix control that gives you access to parallel compression without tying up another mixer channel. DAW users will be accustomed to working with a mix control on their plug-in compressors, but if you’re not too sure of the why and how of parallel compression, Hugh Robjohns wrote a very comprehensive article on the subject in SOS February 2013 (www.soundonsound.com/sos/feb13/articles/latest-squeeze.htm).

Overall, no matter what source I threw at it, the Falcon never failed to delight. Over-exuberant acoustic instruments, vocals and percussion were all sorted out in a manner that didn’t sound unnatural — unless that’s what I wanted. Under heavy compression, it was easy and intuitive to restore the resulting loss of transient information by backing off the Wet control to bring in more of the uncompressed signal, and/or lengthening the attack time with a simple click of that switch. All in all, the Falcon delivered a very impressive performance that remained musical and ‘transparent’ throughout, unless I got a bit carried away at the extremes.

Being aware of Dave Hill’s Crane Song products only by reputation, I really didn’t know what to expect other than that the build quality and audio performance should be of a very high standard. On those two fronts, the Falcon didn’t disappoint; the front panel and the feel of its controls gave me an instant impression of quality and I couldn’t fault the sonics in any way. Dave’s emulation of an optical compressor acts authentically, and sounds very much like the real thing. The valve gain stage certainly adds character, especially when its negative feedback is switched out, and the Lundahl output transformer balances its output without introducing unwanted artifacts.

At around the Falcon’s price you’ll find 500-series alternatives (but not direct equivalents) from the likes of Anamod, API, AwTAC, Chandler, Fredenstein, Neve, Pendulum Audio and Retro Instruments.

This fine, musical-sounding and intuitive unit delivers the performance you’d expect of a vintage optical compressor/limiter, but in a 500-series format. Its valve gain stage adds an attractive character, especially when negative feedback is switched out.