These cans aim to provide maximum isolation from outside sources, and could prove ideal for foldback when playing loud instruments.

Apparently the whole Extreme Isolation project started out with the aim of creating a set of headphones for drummers that would offer enough isolation that they wouldn’t need to monitor at dangerously loud volumes. The designers wanted the headphones to use passive technology rather than noise-cancelling electronics, to avoid the need for batteries, and after fairly small beginnings in 2001, they continued to develop the idea — which they’d probably forgive me for describing as a shooting-range-style ear defender with headphone transducers built in. I tried some of their very early models, which worked but were not really very comfortable. Both these new models, however, sound better and are more comfortable to wear.

For professional use, these headphones also have to be field-serviceable without the need for specialist tools, and they also needed to be sonically neutral: boxes duly ticked so far. They also needed to be adequately lightweight for comfort, yet rugged enough to resist the inevitable studio abuse. We took delivery of two models, the EX25 and the EX29, to see how they held up in the studio. 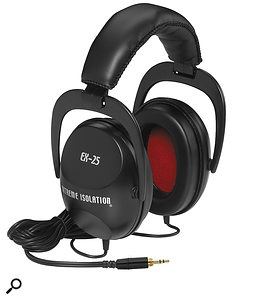 The EX25 is, of course, a fully enclosed design, and it fits a little more tightly over the ears than a conventional phone. The padded expanding headband ensures a fairly comfortable fit, though, and to aid servicing, the cable splits to feed each phone separately rather than feeding one side and then routing through the headband. The attenuation is quoted as 33.4dB at 8kHz, or a Noise Reduction Rating (NRR) of 25dB, but what does that really mean? No headphones can give you total isolation, as you also pick up sounds via bone conduction — just jam your fingers in your ears and see how much you can still hear to confirm that! To put these phones into perspective, the isolation you get is only marginally less than what you’d get by jamming your fingers tightly into your ears, so it’s actually pretty impressive.

The 32Ω drivers are 40mm in diameter and have a sensitivity of 107dB at 1kHz — they certainly go louder than would be considered healthy and are able to handle input powers up to 0.5W, which is pretty massive when it’s all channelled into your ear! They are specified with a 20Hz to 20kHz frequency response.

The phones weigh 9.5oz, including the cable, which is nine feet in length and terminates in a mini-jack. A quarter-inch screw adaptor is supplied, and all the plug contacts are gold plated. 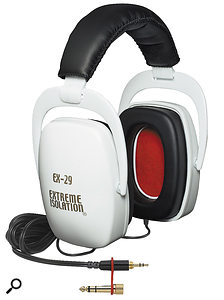 Available in black or special edition white (pictured), the EX29 headphones are similar in concept to the EX25s other than that they are around 7dB more sensitive (specified at 114dB at 1kHz). They are, however, just a little larger and heavier, at 11.5oz, but are again specified with a full 20Hz to 20kHz response. They offer slightly more isolation than the EX29 (36.7dB at 8kHz, NRR 29dB), at the expense of a little extra weight. Direct Sound market the EX25s for comfort and the EX29s for the best isolation.

In practical terms, both models allow you to monitor at lower levels because of the impressive isolation. Drummers tend to benefit the most as their monitoring normally has to be exceedingly loud to be heard above the leakage sound from the kit, but anyone playing in a loud band trying to record in a small studio would benefit. Neither model is quite as comfortable as standard headphones, as they press a little harder onto the ear, but as long as you’re able to take them off when not actually recording the comfort level is perfectly acceptable, as is the audio quality (the lighter weight of the EX25s helps make them more comfortable during longer sessions). It may be that high-end studio phones provide a cleaner sound, but in a tracking environment where you’re also hearing some degree of sound leakage through bone conduction, I don’t think any further improvement in quality would be noticeable. Even used purely for listening to recorded music the phones sound perfectly respectable and definitely better than earlier incarnations.

The short summary then is that the extra isolation means you can monitor at safer levels, and knowing now what we do about hearing damage, this has to be a good thing.

Though not the most ‘hi-fi’ of headphones, these models provide excellent isolation and are ideal for drummers and loud tracking sessions.