Fabfilter’s Pro-Q already did everything an EQ should do — so what can they have added in version 2?

When the original version of Fabfilter’s Pro-Q was released in 2011, it had probably the best user interface of any EQ plug-in I’ve seen. Simple, informative, flexible and unhampered by trying to look like a piece of hardware from 1968, Pro-Q made it easy to do whatever needed doing, whether that was gentle tonal correction, notching out an annoying resonance, clearing up a muddy low end or any of the other innumerable tasks for which one might reach for an equaliser.

It quickly became my first-choice EQ plug-in, and I’ve spent much of the last four years happily popping Pro-Qs into insert slots. If I’m honest, in fact, it hadn’t really occurred to me that there might be ways in which it could be made even better! Fabfilter themselves, though, have not been so complacent, and version 2 of Pro-Q offers a positive avalanche of new features.

Some of these are quite subtle, like the small gear wheel that now appears between the Gain and Q dials when you create a parametric EQ band. This enables ‘Gain/Q interaction’, a common property of some analogue EQ designs whereby the bandwidth narrows as more boost or attenuation is applied. The range of Q values available in Pro-Q 2 also goes further into the realms of vertiginous steepness than the original. Another novelty is a ‘Natural Phase’ mode which is said to match the phase response of analogue EQ designs very accurately; in most practical situations I found it hard to tell the difference, but it is said to help preserve audio quality especially when using very high Q settings. 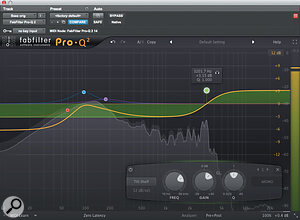 Pro-Q already offered the usual shelves and filters alongside its parametric and notch options, but Pro-Q 2 adds a couple of interesting ‘compound’ shapes. The band-pass option is like having high- and low-pass filters centred on the same cutoff point, and is useful for isolating a small area of the frequency spectrum, for instance if you want to create a ‘telephone’ vocal effect. Probably more useful more of the time, though, is the new ‘tilt shelf’, which is like having high and low shelving bands centred on the same point, with one cutting while the other boosts. By setting a very low Q value, you can indeed ‘tilt’ the frequency response of a source in surprisingly effective fashion. One of my vanishingly few niggles, though, is that if for instance you change an existing band from a low shelving cut to tilt shelf mode, it ‘tilts’ the other way from what you’d expect, with a low-frequency boost and high-frequency cut.

The most telling improvements have been made in the area where Pro-Q already stood out from the crowd: its graphical user interface. In the original, real-time spectral analysis was available, but you had to enable it manually, and decide whether you wanted the input or the output signal to be displayed. In Pro-Q 2, it’s enabled by default, with the input and output signals superimposed so that you can see exactly what your EQ settings are doing to the sound. You can also display the spectrum of the side-chain input, if you’re using one (of which more in a moment), and in case all this extra information makes things cluttered, you can now resize the entire window to a choice of four dimensions, or zoom in horizontally on a particular area of interest. A button at the top right-hand side of the Pro-Q 2 window puts it into full-screen mode, and a button in the opposite corner brings up a musical keyboard along the bottom, so that you can visualise the spectral display in terms of note pitches, and quantise the frequencies of individual bands to them.

And that’s not all. Hover the mouse pointer over the spectrum analyser for a few moments, and a thicker white line appears, displaying the integrated peak level over time. As the peaks and troughs build up, you can then simply click one with the mouse to create an EQ band targeting that area.

Hover the mouse over the lower right part of the screen, and you’ll see that the output gain control has, er, gained some new features, too. These include a Gain Scale slider, which lets to simultaneously vary the amount of cut/boost that all bands are applying, and an effective Auto Gain button, which automatically adjusts the output gain to maintain a consistent subjective level, so you can get an unbiased verdict on the benefits of your EQ settings.

There’s more, too, including even more flexible stereo options and a global polarity switch, and the plug-in as a whole is said to be twice as CPU-efficient as its predecessor. It will even load version 1 presets. For me, though, the most impressive thing about Pro-Q 2 is that Fabfilter have added their shedload of new features without ever compromising the immediacy and usability that made the original so good. It sounds great, it looks great, and it does everything you could possibly want from an equaliser. What’s not to like?

The only directly comparable EQ plug-in I know of is DMG Audio’s Equilibrium, which has a ridiculously comprehensive feature set but is perhaps a touch less streamlined in use. 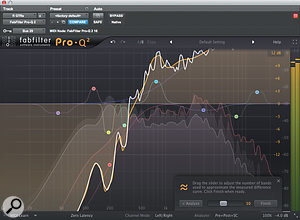 EQ matching in Pro-Q 2. As you can see, it is also trying to match the level difference between the source and reference, resulting in a hefty boost!

If you’re working in a DAW that supports side-chaining, you can take advantage of Pro-Q 2’s simple but very effective EQ Match feature, which lets you transform the spectrum of your source to match that of any reference. Simply route the reference audio to Pro-Q 2’s side-chain input, press Play, and when you’re happy that its analyser has built up an accurate picture of both tracks, hit Match to create an EQ curve. The really neat thing here is that you can then use a simple slider to vary the number of EQ bands anywhere from zero to 24; reducing the number of bands used obviously gives you a less precise recreation of the reference sound, but can be a very useful way of obtaining broad-brush tonal correction. Note, though, that Pro-Q 2 does not automatically compensate for any level differences between the reference and source tracks, so if one is much louder than the other, the Match curve will be doing a lot of broadband boost or attenuation as well as tone-shaping.

You can keep your Pultec recreations and virtual SSL strips — this is software EQ done right.