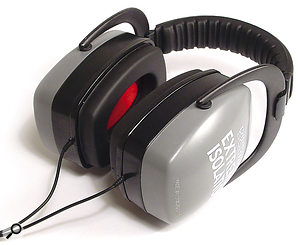 Direct Sound's Extreme Isolation Headphones are designed to offer more isolation than ordinary closed-back models — the typical figure quoted is 29dB, which is a lot! They achieve this by fitting a headphone system into what is effectively a pair of ear defenders, with bulkier and heavier cups than you'd expect from regular phones. The headband, which is fully adjustable, has a strong spring to ensure a good seal between the phones and the head.

The spec for the phones is a nominal 20Hz-20kHz response, though no plot is supplied. The electrical efficiency is quoted as 96dB/mW and the impedance is 32Ω, which should work with most headphone outlets. A plug adaptor is included so the phones will work in either 3.5mm or quarter-inch sockets. Separate cables lead to each phone, joining at around 300mm to form a single cable.

My tests revealed the phones to be sufficiently accurate to be used for most applications other than final mixing, though there is a slight emphasis to the bass end that doesn't seem entirely natural. They're certainly fine for performer monitoring, mic positioning, live recording (where separation is always a problem) and for providing a cue mix to drummers or electric guitarists. The downside is that the phones aren't as comfortable as most, not only because of their greater weight, but also because of the greater pressure on the sides of the head. This isn't serious for short-term use, and if you can take them off for a minute or two at the end of each pass, that's fine. I wouldn't want to wear them for hours on end though.

In summary, I'd say that these are about the best compromise you're likely to get between comfort, isolation, audio quality and UK price, and to my knowledge nobody else is making affordable phones designed to offer such high levels of isolation. Compromises have to be made to meet these disparate needs, but there's no doubt these phones provide a wonderful tool for monitoring close to loud sound sources, whether in the studio, recording live or practising drums along with a backing track.