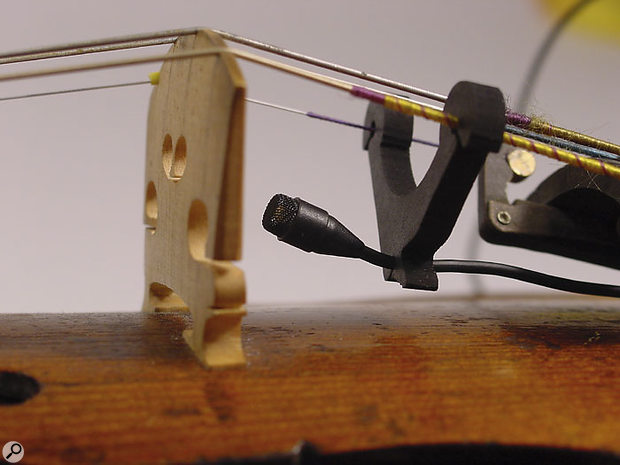 The 4061 miniature mic mounted behind a violin bridge with one of the accessories included in the IMK4061 kit.

This affordable miniature mic from one of the top names in condensers can neatly solve a variety of common recording problems.

You only have to read a few recent issues of SOS or drop into your local pro audio dealer to see how competitive the microphone market has become. As little as perhaps five years ago an entry ticket into the world of condenser microphones cost perhaps £350 in the UK. Today though you'll find products at under £100. They may not carry famous brand names, and they may mostly be spat out of the same few Chinese factories, but by and large, for the money, they do a good job and can put to shame most similarly priced dynamic microphones.

So at a time when we can all probably reach into the cupboard and pull out at least one cheap yet good condenser mic, what does the rather more expensive, though still not exactly credit card-melting, DPA IMK4061 have going for it? Quite a bit as it happens...

The 4061 microphone at the heart of the IMK4061 kit began life as a miniature lavalier mic intended for discreet use in broadcast applications, but, thanks to its unusually good performance, it began to find a role in live theatre and PA-assisted orchestral concerts. For theatre applications, the mic and its captive lead are also available in white or beige and if you, like me, have seen a West End musical recently and been confused by performers that are not miming yet have no visible means of amplification, a 4061 stuck to the side of the cheek and disguised under a layer of stage make-up explains all. 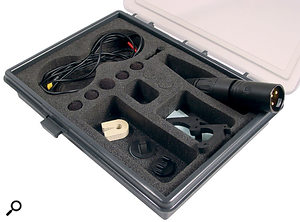 The complete IMK4061 kit.The IMK4061 comprises the tiny (and I really mean tiny — 5mm diameter and 12.7mm long) omnidirectional condenser microphone, a phantom power/XLR connection adaptor, five disposable foam windshields, a variety of accessories designed to aid mounting the microphone on, and perhaps even in, a range of instruments, and an alternative capsule grid that offers a modified high-frequency response. My only beef on the kit is that it's pretty mean on the number of self-adhesive surface mounts. They are simple, cheap rubber mouldings with a springy slot, designed to take the microphone cable, and the two in the kit just aren't enough. Although, I have to say, once I'd used them both I simply resorted to Blu-Tac and that worked equally well.

The microphone is hard wired to one end of a 1.8m-long thin and flexible lead on the other end of which is a somewhat delicate looking gold-plated screw connector. This connector attaches to the XLR adaptor. I initially had some reliability problems with the screw connector, but they turned out to be caused by my simply not tightening it enough.

As far as specifications are concerned, as you'd expect from DPA, the mic has a ruler-flat response through bass and mid, but it is combined with a, presumably intentional, 2dB lift centred on 12kHz or so. The alternative grid increases this lift to a generous, perhaps even excessive, 10dB. Sensitivity is a lowish but perfectly adequate 6mV/Pa, equivalent noise is competitive at around 26dBA and maximum SPL is a robust 144dB before clipping — figures which collectively put the mic in the middle of the range typical of the quality condenser mic species. The 144dB maximum level is generous, but then it's kind of necessary for a mic designed to be used up very close and personal, as the 4061 is. Two other variants of the 4061 are in fact available, although not in the kit form, that offer alternative sensitivity and maximum level trade-offs. 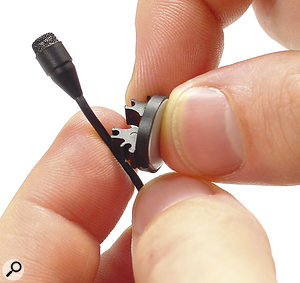 One of the included mounting clips incorporates a surprisingly powerful magnet for attachment to ferrous materials.The first thing you notice about the IMK4061 in use is its really classy, uncoloured and open sound. It really does show the characteristics of a good-quality condenser mic. This is perhaps partly due to its omnidirectional characteristics (all other things being equal, an omni will be likely to sound more natural than a cardioid) and very small size, but it also has that unmistakable DPA naturalness that comes from low distortion and a flat frequency response through the critical mid-band. Tonally it sounds satisfyingly neutral, neither dull nor bright. It's one of those rare mics that sounds free of any pervasive character, and fundamentally right. Tiny it may be, and able to get places that no conventional mic can, but I'd have little hesitation in using the 4061 in place of a large-diaphragm condenser to record a vocal — although there's a good chance the vocalist would think I've forgotten to put the microphone on the stand.

But it's when the going gets tough and you need to record a 'difficult' instrument or performer, perhaps in an unhelpful environment, that the 4061 really comes into its own. Being an omni, the 4061 suffers far less proximity effect or variation in sound with position and orientation than a cardioid, and being so small and light it can be stuck directly to the instrument. Using it up so close to the source also means that spill and background noise is reduced. It really comes into its own with acoustic guitars — you can move it around the guitar, even put it inside, sticking it with Blu-Tac and getting exactly the right sound without any risk that, as soon as you turn your back, the guitarist has moved and the sound is lost. (What is it with guitarists that they'll sit there patiently while you get the mic and sound just right, then as soon as you go for a take they'll push their chair back, or uncross their legs?)

I do a fair bit of recording of songwriting guitarists and the majority of them perform better playing and singing at the same time. This means there's often a trade-off necessary between performance quality and recorded guitar sound. Use the piezo pickup to avoid vocal spill and the guitar sound is average at best. Record the tracks separately, though, with a condenser on the guitar and the performance suffers. Use two conventional mics and record the whole performance and either two-way spill or movement (usually both) compromises the sound and the mix. So imagine the advantages of recording the guitar with the 4061 fixed under the strings immediately adjacent to the sound hole, and the vocals with a good hypercardioid arranged to minimise guitar spill. The close-up position of the 4061 reduces spill to an acceptable level and the quality of the guitar sound is far better than would be the case from a typical piezo pickup. This mic really changes the rules. 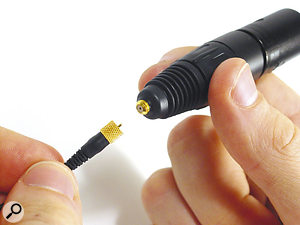 The miniature mic's diminutive screw-lock connector interfaces with normal mic inputs via an XLR adaptor.The 4061 also encourages experimentation. My main instrument these days is a Steinberger electric upright bass. Its plucked sound is good from the piezo pickup, but its bowed sound less so — decidedly honky in tone and with not the slightest hint of an acoustic instrument. But with the 4061 stuck right under the strings beneath the bow, picking up the instrument's meagre acoustic output, and with the piezo pickup output recorded on a separate channel, I can mix the two and generate a convincing imitation of a bowed double bass. I'd tried before with a conventional condenser mic set up an inch or so from the strings, but it so impeded the bow that I gave up.

Similarly, an old Eko acoustic bass guitar I've had for years, but never seriously recorded because it is so quiet and needed a mic so close, suddenly became useable with the 4061. I'd even bet that the pickup-free Eko could now be used in live performance. And finally, although I didn't try it, I've no doubt that a vocalist who likes to move about when they sing could be recorded pretty effectively with the 4061 mic taped, West End musical-style, to the side of their cheek.

You can probably tell I'm impressed with the IMK4061. As an addition to my microphone collection (currently an SM58, an AKG C3000 and a CAD M179) it would rate somewhere between really useful and absolutely vital. I can honestly see it, often as not, as the mic I'd reach for first.

DPA grew out of Danish test and measurement equipment specialists Bruel & Kjaer. B&K in the late '70s began to apply their skills in the design and manufacture of test microphones to a small range of (witheringly expensive) studio recording mics. They were, and are, characterised by a reputation for a uniquely natural and open sound especially suited to recording voice and traditional acoustic instruments. Those that could afford them often tended to use little else.

DPA was spun off from B&K as an independent company in 1992. Vitally, the new company included the designer of the original B&K studio mics.

The 4061 is really unusual in combining sound quality with versatility. Its tiny size and light weight mean a performance need be less compromised and influenced by the paraphernalia of recording. One of those rare products that can really extend your ability effectively to record instruments and vocalists — especially in less-than-ideal circumstances.