Although the main title of this sample collection from Big Fish Audio only mentions pop and soul, the content also covers R&B guitar styles, and aims to provide material comparable to that found on records by Usher, Rihanna, Ne-Yo, Justin Timberlake, the Black Eyed Peas, Alicia Keys, Pink and Beyoncé. 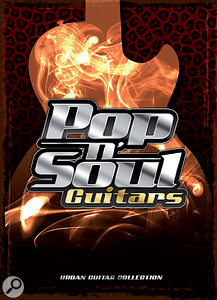 The 8.52GB of samples are formatted as Acid, Apple Loops, RRX, RMX and WAV files, and include electric, acoustic and nylon-guitar loops and phrases, presented as 25 construction kits.

Interestingly, BFA have included dry versions of every sample (which means that a copy of the guitar signal was fed straight to the recorder rather than through an amp), so that if the amp and room sound is not cutting the mustard in some way, there is the unaffected version to play through whatever amp or effect plug-ins the user has at their disposal. BFA have started doing this with some of their other recent products, including Modern Rock Guitar & Bass Loops, and it certainly is a good idea. Each kit folder, identified by its musical key and unique number, contains not only Amped and Direct folders, but also a stand-alone master mix file demonstrating how the separate loops within the kit can potentially fit together as a composition.

Heading into either the Amped or DI folders reveals loops labelled Bridge, Chorus, Outro and Verse and there is one of these for each of the guitar parts. The kits are made up of just three guitar parts and nothing else, which is in contrast to some construction kit products that also provide bass, drums, keyboards and other accompaniment. Here it is left to the user to source sounds for other instruments.

The content is actually a little more diverse than the list of artists would suggest. 'Kit 02 066 Bb', for example, sounds more like George Harrison than Pink, and there are definitely strong elements of jazz, rock and funk throughout.

The particular style of the player(s) starts to become evident after a little listening. There are frequent flurries of hammer-ons/pull-offs decorating the R&B and lighter semi-acoustic pop kits, a consistent palm-muted guitar technique controlling the rhythm lines, and sweeping chords helping to join together the aforementioned finger-picked and palm-muted lines.

The loops mostly lean towards being clean and punchy, although there is the occasional distorted guitar. Effects are used sparingly but well, and there are some pleasing tremolo and chorus lines to be found. The nylon and acoustic guitars, when they occasionally appear, contrast nicely and intelligently with the electrified sounds.

What's especially nice is that the loops are made up of phrases that could easily be taken out of their kit context and used in many different ways. This may be just the nature of pop and soul guitar phrases rather than clever planning but, whatever the reason, ultimately it is that sort of flexibility that makes this library worth having. Tom Flint