I’ve reviewed a couple of other sample libraries for this column recently that were of the ‘horror’ variety and, given the ‘Scream’ title, you could easily be forgiven for thinking Big Fish Audio’s latest release fell into the same category. However, the ‘Rock Vocals’ sub-title gets you closer to the mark. That said, ‘rock’ is a pretty broad church, so just exactly what do you get style-wise amongst the 800-plus megabytes of 24-bit WAV files (which is the format I checked out) included in the library?

Scream contains vocal samples from six different singers — two male and four female — and the bulk of the content is organised into six folders to reflect this. In addition, you get two separate folders with a small collection of multi-samples (so you could roll your own sampler patch if you didn’t purchase the Kontakt version of the library) and a somewhat larger selection of ‘one-shots’. These include samples from all six of the original vocalists and provide screams, whispers, groans, sustained notes, breaths and some rather fun 1-2-3-4 count-offs. 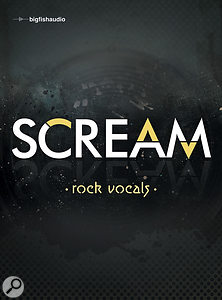 The content in each of the six main folders follows a similar format with an impressive selection of backing vocal-style performances. Yes, there are lots of ‘oohs’ and ‘aahs’, but these are far from just static notes; there are lots of melodic and rhythmic elements to the performances also. Usefully, within each folder there are small clusters of related loops and these can easily be combined to build some suitable backing vocal parts for a song section. All the files are also stereo and appear to be based on genuine double-tracked performances, so they certainly feel ‘real’ when used in context.

In terms of style, the two male vocal performances are probably best characterised as commercial rock (think Fall Out Boy or Feeder rather than AC/DC) and melodic pop, while the four female vocal styles run from pop rock, through cutesy pop and into melodic singer/songwriter territory. Given the library title, I’d perhaps expected somewhat more screaming than I actually got but, that said, while the content is of a more soothing variety, it is consistently good.

I could easily imagine using these loops to create a backing vocal bed or vocalised hook in a music-to-picture context or to slot behind a lead vocal to beef up a chorus. Add in a bit of Melodyne so you can manipulate the timing and pitch to suit and the collection could also be made to stretch much further than the supplied phrases. Scream: Rock Vocals might not actually do that much screaming, but as a source of well-recorded and very usable indie/pop rock backing vocal parts, it is good value for money. John Walden

Distant City Studios - A Drum Room With A Difference
1 month 21 hours ago.