The market for valve mics has changed a lot over the years. Has A–T’s rebooted classic got what it takes to keep up?

Audio–Technica’s new AT4060A looks much like the earlier AT4060, which I reviewed almost exactly 16 years ago (you can find that original review on the www.soundonsound.com web site). Indeed, the changes to this new version are quite minor, though it has been updated to comply with all current materials regulations and comes with an improved power supply that purportedly further improves its noise performance. A good–quality custom shockmount comes with the mic, as does a rackmounting kit for the power supply. The mic itself comes in a vinyl-covered box — there are no fancy camera cases.

At the heart of the microphone is a dual–diaphragm, fixed cardioid–pattern capsule that was developed for the original AT4060, and the mylar diaphragms are coated with gold using a vapour–depositing process. This is externally polarised, unlike many A–T mics that are based on back–electret technology. A–T then artificially age the capsule to ensure stability over its operating life. 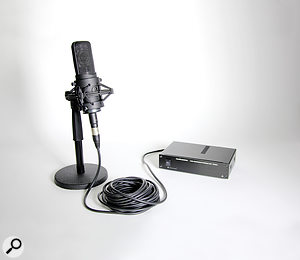 The AT4060A’s body looks like a lengthened version of their popular AT4050 solid–state mic, where the extra space is needed to accommodate the hand–selected valve — a miniature type fitted into an anti–vibration mounting.

As with the other mics in the 40–series, the AT4060A is finished in satin black and features a symmetrical basket structure, with the A–T badge denoting the ‘hot’ side of the capsule. In the original review I commented that there were no pad or roll-off switches, which might be considered unusual in a microphone with a recommended retail price of $£1600, though perhaps a pad could be considered unnecessary as the mic can take on punishing SPLs of up to 150dB without overloading. However, a low–cut switch would have been welcome for close–up vocal recording, but this revised model has neither.

Power comes from the included AT8560A power supply, a 1U half–width unit that can be switched to operate at 230 or 115 V, at 50 or 60 Hz. This hooks up to the mic using the supplied six–pin XLR cable. As with the original you get an input for the mic, a three–pin XLR output and an IEC mains connection. There are no controls other than a power switch on the front panel and a ground–lift slide switch on the rear, with a discrete LED letting you know the power is on. As you’d expect from Audio-Technica, the build quality is impeccable.

The AT4060A isn’t one of those mics that serves up a soupy, overblown valve sound, and there are no dramatic excursions in the frequency response to give it a very obvious character. The upper mids and highs are lifted very slightly, which lends the mic a nice sense of detail, but on most sources it sounds natural and refined rather than hyped. A–T’s original 4060A managed a fairly typical EIN figure of 19dB, though the revised PSU has improved on this very marginally. Similarly the sensitivity of –34dB for 1mV is in the same ball park as most other capacitor studio mics.

In subjective terms the mic does manage to add a little subtle flattery, but in such a way that you hardly know that it’s doing it. There’s a bit of a bump in the upper bass that balances the slight high lift so that you don’t sacrifice warmth for clarity, while the high end manages the trick of being both detailed and smooth sounding. If you want a more airy vocal sound you can add some high-shelving EQ without adding harshness.

Although the AT4060A makes an excellent vocal mic, it also acquits itself well on acoustic guitars and other acoustic instruments, where its ability to capture detail in a non–aggressive way is much appreciated.

In reality there are now probably many more good–quality, relatively affordable valve mics in the marketplace than when the AT4060 was introduced, but even so it seems that many engineers are very pleased to see it return in its AT4060A guise. Nevertheless, it does face a lot of competition, not only from the many Chinese–built microphones now available (many of which offer a good price/performance ratio) but also from some of the smaller bespoke mic manufacturers, and indeed from the other established builders such as Neumann, AKG, Rode and so on. That said, the AT4060A is a genuinely high–quality microphone that will last a lifetime and that will produce high–end results on a wide range of sound sources. Spend the same on a computer to run your DAW and within five years you’ll be paying somebody to take it away.

There are now so many valve microphones out there that it’s hard to know where to start when listing alternatives, though I’d be inclined to check out the independent specialist mic companies such as Avantone, Telefunken, Blue, Charter Oak, Lewitt and so on.

Though it may stretch your budget, the AT4060A is a truly professional-grade microphone that will give many years of studio service.