The subtitle of this library — The Michael Ripoll Project — calls to mind progressive rock outfit the Alan Parsons Project, but that must be an unintentional red herring, because there isn't much that is progressive or experimental here. In fact, it is all very straightforward and business-like, offering commercially viable tones and phrases in a number of mainstream musical genres. This sober approach is not going to set the world alight, but for many jobbing composers, it is what's desirable. 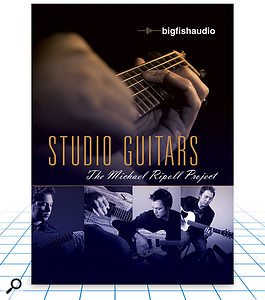 To these British ears, the guitar sound is very American, which is not surprising given Michael Ripoll's CV: he was born and grew up in New York, becoming a session guitarist specialising in pop, rock, R&B, jazz and gospel, predominantly working with US artists.

His library of 1059 loops is duplicated in four formats (Acidised WAV, Apple Loops, REX and RMX) averaging about 1.84GB for each. These are then divided into eight genres, titled Acoustic, Blues, Country, Funk, Jazz, Pop, Rock and Extra Guitars, and then into sub‑folders which can be thought of as construction kits. In other words, the files within can be chained together, and/or laid over one another (in the case of a solo and rhythm part), to make the basis of a track. Pretty much everything has been recorded dry except for the contents of the Extra Guitars folder, where some effects are showcased.

Within a particular folder, it is obvious what's what. Files names are marked with L or R to indicate when they can be used simultaneously, panned left and right, and include explanatory words or abbreviations such as 'rthm', 'end', 'pickup', 'hook' and 'bridge', making it quick and easy to start building compositions. But the problem is finding stuff amongst all the folders in the first place. In short, there isn't anything obviously consistent or logical about the content, with some folders packed full of nearly 50 loops while others contain just two. The folder names themselves give little indication. For example 'Rock 07 098 Ebmaj', contains nine loops, whereas 'Rock 11 135 Ebmaj' has 47!

What's more, in the Country folders, there are finger‑picked riffs on electric guitar, but only strummed ones on the acoustic. However, finger‑picked riffs with a country feel exist in the Acoustic folder. Finding the right rhythmic groove for a track is often the goal, so a more exhaustive and detailed menu of rhythms would improve matters.

Studio Guitars tries to cover too much and ends up falling between stools: not covering every style, or any single one thoroughly, and offering different rhythms in different keys in different folders. Criticisms aside, though, the material is immaculately played, and recorded evenly enough, if not always perfectly, to provide any composition it's used in with a very polished feel. What's more, its no‑nonsense approach will be welcomed by professionals looking for bread‑and‑butter material. Tom Flint