This handmade mic employs top-quality components, which lend it a character reminiscent of the classic Neumann M49. 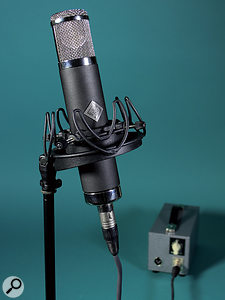 Blackspade are very open about where they source their component parts, and all of their microphones are covered by a five-year warranty — although the inherent nature of NOS (new old stock) valves means that they can only be guaranteed for six months. Every microphone also undergoes a seven-day burn-in test at the factory before shipping. The company's products can be bought directly from their online shop or via their distributors.

The UM17R reviewed here was conceived as a no-expense-spared, multi-pattern valve capacitor microphone, and is intended to offer an alternative to more established high-end models. The project took over two years from conception to delivery, and combines the work of experienced American and German designers and manufacturers. It isn't intended to be a 'clone' or even an emulation of anything specific, however, despite sharing some obvious sonic characteristics with the Neumann M49. Perhaps that's largely because the UM17R employs many components similar to those used in related designs.

Supplied in an aluminium flightcase, the UM17R is carefully protected in a felt-lined wooden box, secured within a moulded liner. Also in the case is a Gotham mic cable terminated with Neutrik seven-pin XLR connectors, a Rycote USM shockmount, and an AMI power supply finished in a grey 'Hammerite' paint. AMI are the company behind the Tab-Funkenwerk preamps, by the way, and they have played a big part in developing the Blackspade range of microphones.

The UM17R measures 44mm in diameter, is 245mm long, and weighs in at 775g. The body borrows design cues from several vintage mics, but is probably closest to a Neumann U47 in shape, with a hard matte-black paint finish and chromed grille and base ring. The Blackspade badge is a dull silver diamond carrying a kind of knot graphic, again taking style cues from Telefunken and Neumann.

The mic is hand-built using a Thiersch STW7 Redline capsule (see box) and an NOS Telefunken EF732 wire-ended pentode sub-miniature valve from Germany. Most of the rest of the UM17R's components come from America. These include an impedance-conversion circuit designed by AMI's president, Oliver Archut, along with a custom AMI BV8LP all-nickel transformer, based on the transformer used in the Neumann U47. The included shockmount is the brilliantly engineered USM model from British manufacturer Rycote, with custom lyres matched precisely to the mass of the UM17R, to ensure optimised vibration isolation.

The technical specifications for the microphone are fairly typical for the class, with a moderate sensitivity of 14mV/Pa, and a self-noise figure of 17dB (A-weighted). The maximum SPL is given as 128dB, with distortion reaching one percent at 132dB SPL. There is no pre-attenuator facility on the UM17R, and while 128dB is very loud, it is possible to place a mic in positions where a greater sound pressure level could be found. For that reason, some care might be required if working the microphone very close to seriously loud sources, like brass instruments or loud percussion.

The UM17R appears to be very well built, using obviously premium parts that go a long way to justifying the mic's price. The EF732 valve is supported within a foam block and hand-soldered with carefully dressed leads into the circuit board, which carries conventionally sized components on both sides. My only slight concern on the construction side was with the power-supply unit, which has a CE mark but no mains power-rating label — something that would earn it an instant fail from any jobsworthy PAT tester!

One end of the power-supply unit carries a jewel-style power lamp, chunky on/off toggle switch, a fuse holder and the ubiquitous IEC inlet, but there is no mains voltage selector, despite the handbook making reference to checking the correct voltage setting before use! The plate on the opposite end carries two XLR connectors (a seven-pin XLR for the microphone, and a three-pin output XLR), plus a rotary switch with a 'chicken-head' knob to change the polar pattern. There are 11 settings, ranging from omnidirectional through to cardioid and on to figure-of-eight, and the microphone's output takes a short while to settle after changing the pattern selector — which is not unusual. However, it mutes completely for a few seconds when changing to the omni mode, and while that's not an issue if you expect it, it worried the heck out of me the first time I came across it!

As is my wont, I started out listening to the UM17R by holding it in my hand (it's easier this way to turn the mic and to listen for off-axis coloration and proximity effects). This revealed that the mic is very sensitive to mechanical vibration, and that the long cylindrical body exhibits some low mid-range resonances when tapped. However, after installing the mic in the Rycote USM shockmount. the body resonances were very well controlled, thanks to the four clamping screws, which act to damp the body as well as to support it. Vibration isolation was extremely good, and the integral cable clamp (which is so essential in catching vibrations running along the cable) was able to accommodate the fat Gotham mic cable with ease.

Listening to the UM17R quickly revealed that it is a very nice-sounding microphone indeed, with plenty of body and mid-range focus, topped off by a bright, airy high end. I can see why Blackspade make references to the M49 sound character — I could hear similar qualities during use myself. The microphone sounds quite neutral in its overall response, with a gentle LF roll-off and only a very mild presence peak around 3kHz, supplemented with an 'airy' lift around 12kHz. The Blackspade web site does not currently have a frequency-response plot for the UM17R, and although there is one for the cheaper UM17 model (which uses a different capsule), I'm not sure how close the two would be. However, it is clear from listening that no frequencies are over-emphasised and, as a result, this microphone works very well with an extremely wide range of musical sources.

Essentially, the microphone captures the sound of the source, rather than imposing any strong tonality of its own, and I found that I could apply EQ to it very easily to gently shape the tonality of a source when needed. The UM17R can also be added to my list of the few mics I know that work well on female singers. The harmonics of female voices clash in unhappy ways with the presence peaks of many mics, but not with the UM17R, which never sounded harsh or sibilant.

It delivered a lovely sound from a baby grand piano, and the crisp high end worked very well when I used the mic as a drum overhead, on percussion and on acoustic guitars. I'm not sure it would be my first choice for electric-guitar amps, because it could be perceived as a little too polite and refined for that role in some cases, and I'd probably choose something with more headroom for full-on brass sections. But in general, the UM17R is a good all-rounder of a microphone, delivering the sound of whatever is placed in front of it, but with a musically helpful, slightly rich and brightly detailed character.

Close miking with any of the patterns between cardioid and figure-of-eight benefited from the inherent proximity effect, which increased the sense of a full, rich, solid bottom end, but it never sounded muddy or congested, and always retained a sense of focus and a bright, detailed high-end. On occasion, I felt the mid-range was just a little recessed, and that made it sound a bit more modern and lean-sounding than a genuine M49, but the UM17R isn't intended to be a clone and it has its own unique sound character, which sounded very good to my ears.

The UM17R is my first experience of a Blackspade mic, and I'm very impressed with both the company's design ethos and the sound quality achieved with this particular model. It's well worth checking out if you are in the market for a high-quality, versatile all-rounder valve microphone.

The obvious alternatives, with a similar price and design, are the Peluso 2247 SE and P67 models, or the Telefunken AK47 Mk II. At a higher price point the Brauner Valvet X is a lovely mic, and there's always the ever-classic (but solid-state) Neumann U87 to consider!

If you've not heard the name before, Thiersch are a German company named after their founder Siegfried Thiersch, who started working as a precision mechanical engineer apprentice with the Neumann company at its Gefell factory in 1958. After 20 years of making and designing capsules for the Neumann and Microtech Gefell companies, Thiersch set up his own independent business in 1978 as the authorised repair shop for Microtech Gefell.

In 1993, his exclusive contract with Microtech Gefell came to an end and Thiersch now service capacitor microphone capsules for all brands, as well as making new replacement capsules based on classic Neumann designs for a wide range of boutique manufacturers. The STW7 Redline capsule employed in the Blackspade UM17R is a replica of the Neumann M7 centre-terminated capsule, built using an MCF (mylar polycarbonate foil) diaphragm.

A nicely designed valve microphone that combines premium components to deliver a premium sound, sharing many desirable characteristics with the classic Neumann M49, but with a more modern flavour.